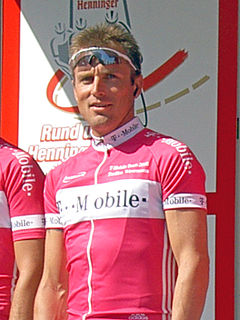 Steffen Wesemann is a retired professional road racing cyclist. He competed in the individual road race at the 1992 Summer Olympics. Wesemann most recently rode for the professional continental team Cycle Collstrop after riding a year with the Team Wiesenhof-Felt squad. He had previously spent the other years of his career at Telekom who later became Team T-Mobile. In September 2005, Wesemann and his family, longtime residents of Küttigen, Switzerland, obtained Swiss citizenship. He was a specialist in the one-day Spring Classics—winner of the 2004 Tour of Flanders and 5-time champion of the Peace Race.

Uwe Ampler is a retired track and road cyclist from East Germany, who represented his native country at the 1988 Summer Olympics in Seoul, South Korea. There he won the gold medal in the men's team time trial, alongside Jan Schur, Mario Kummer, and Maik Landsmann.

Zbigniew Spruch is a Polish former professional road bicycle racer. He won the Tour de Pologne in 1995 and placed second at the 2000 UCI Road World Championships.

Sergei Nikolaevich Sukhoruchenkov is a former Soviet cyclist and Olympic Champion. He won the gold medal at the 1980 Olympic Games in Moscow, in the road race.

Vitaliy Nikolayevich Buts is a Ukrainian road bicycle racer, who currently rides for UCI Continental team Salcano–Sakarya BB Team. He has been riding since 1997 and turned professional in 2009 with the Lampre–NGC team.

Ivailo Gabrovski is a Bulgarian former racing cyclist. He holds the record for most Tour of Bulgaria wins, which he won 5 times.

Aurel Șelaru was a Romanian racing cyclist, part of the "golden generation" of Romanian cycling from the 50s to the 60s. He competed for Dinamo Bucharest and for the national team of Romania, where he had colleagues, among others: Ion Cosma, Gabriel Moiceanu, Marcel Voinea, Ludovic Zanoni, Gheorghe Calcișcă, Walter Siegler, Constantin Dumitrescu and his good friend Dumitru Constantin.

Zygmunt Hanusik was a Polish cyclist. He competed in the individual road race at the 1968 Summer Olympics. Hanusik died on 4 March 2021, aged 76.

Sergiy Lagkuti is a Ukrainian racing cyclist. He rode at the 2014 UCI Road World Championships.

Stefan Koychev Hristov is a Bulgarian road racing cyclist, who last rode for Bulgarian amateur team CC Vereia. He competed in the road race at the 2016 Summer Olympics.