The Neogene ( /ˈniː.ədʒiːn/ NEE-ə-jeen), [6] [7] informally Upper Tertiary or Late Tertiary, is a geologic period and system that spans 20.45 million years from the end of the Paleogene Period 23.03 million years ago (Mya) to the beginning of the present Quaternary Period 2.58 Mya. The Neogene is sub-divided into two epochs, the earlier Miocene and the later Pliocene. Some geologists assert that the Neogene cannot be clearly delineated from the modern geological period, the Quaternary. [8] The term "Neogene" was coined in 1853 by the Austrian palaeontologist Moritz Hörnes (1815–1868). [9]

During this period, mammals and birds continued to evolve into modern forms, while other groups of life remained relatively unchanged. The first humans ( Homo habilis ) appeared in Africa near the end of the period. [10] Some continental movements took place, the most significant event being the connection of North and South America at the Isthmus of Panama, late in the Pliocene. This cut off the warm ocean currents from the Pacific to the Atlantic Ocean, leaving only the Gulf Stream to transfer heat to the Arctic Ocean. The global climate cooled considerably throughout the Neogene, culminating in a series of continental glaciations in the Quaternary Period that follows.

The Pliocene Epoch is subdivided into two ages:

The Miocene Epoch is subdivided into six ages:

In different geophysical regions of the world, other regional names are also used for the same or overlapping ages and other timeline subdivisions.

The continents in the Neogene were very close to their current positions. The Isthmus of Panama formed, connecting North and South America. The Indian subcontinent continued to collide with Asia, forming the Himalayas. Sea levels fell, creating land bridges between Africa and Eurasia and between Eurasia and North America.

The global climate became seasonal and continued an overall drying and cooling trend which began at the start of the Paleogene. The ice caps on both poles began to grow and thicken, and by the end of the period the first of a series of glaciations of the current Ice Age began. [11]

Marine and continental flora and fauna have a modern appearance. The reptile group Choristodera went extinct in the early part of the period, while the amphibians known as Allocaudata disappeared at the end of it. Neogene also marked the end of the reptilian genera Langstonia and Barinasuchus, terrestrial predators that were the last surviving members of Sebecosuchia, a group related to crocodiles. The oceans were dominated by large carnivores like megalodons and livyatans, and 19 million years ago about 70% of all pelagic shark species disappeared. [12] Mammals and birds continued to be the dominant terrestrial vertebrates, and took many forms as they adapted to various habitats. The first hominins, the ancestors of humans may have appeared in southern Europe and migrated into Africa. [13] [14] The first humans (belonging to the species Homo habilis ) appeared in Africa near the end of the period. [10]

About 20 million years ago gymnosperms in the form of some conifer and cycad groups started to diversify and produce more speces due to the changing conditions. [15] In response to the cooler, seasonal climate, tropical plant species gave way to deciduous ones and grasslands replaced many forests. Grasses therefore greatly diversified, and herbivorous mammals evolved alongside it, creating the many grazing animals of today such as horses, antelope, and bison. Ice age mammals like the mammoths and woolly rhinoceros were common in Pliocene. With lower levels of CO2 in the atmosphere, C4 plants expanded and reached ecological dominance in grasslands during the last 10 million years. Also Asteraceae (daisies) went through a significant adaptive radiation. [16] Eucalyptus fossil leaves occur in the Miocene of New Zealand, where the genus is not native today, but have been introduced from Australia. [17]

The Neogene traditionally ended at the end of the Pliocene Epoch, just before the older definition of the beginning of the Quaternary Period; many time scales show this division.

However, there was a movement amongst geologists (particularly marine geologists) to also include ongoing geological time (Quaternary) in the Neogene, while others (particularly terrestrial geologists) insist the Quaternary to be a separate period of distinctly different record. The somewhat confusing terminology and disagreement amongst geologists on where to draw what hierarchical boundaries is due to the comparatively fine divisibility of time units as time approaches the present, and due to geological preservation that causes the youngest sedimentary geological record to be preserved over a much larger area and to reflect many more environments than the older geological record. [8] By dividing the Cenozoic Era into three (arguably two) periods (Paleogene, Neogene, Quaternary) instead of seven epochs, the periods are more closely comparable to the duration of periods in the Mesozoic and Paleozoic Eras.

The International Commission on Stratigraphy (ICS) once proposed that the Quaternary be considered a sub-era (sub-erathem) of the Neogene, with a beginning date of 2.58 Ma, namely the start of the Gelasian Stage. In the 2004 proposal of the ICS, the Neogene would have consisted of the Miocene and Pliocene Epochs. [18] The International Union for Quaternary Research (INQUA) counterproposed that the Neogene and the Pliocene end at 2.58 Ma, that the Gelasian be transferred to the Pleistocene, and the Quaternary be recognized as the third period in the Cenozoic, citing key changes in Earth's climate, oceans, and biota that occurred 2.58 Ma and its correspondence to the Gauss-Matuyama magnetostratigraphic boundary. [19] [20] In 2006 ICS and INQUA reached a compromise that made Quaternary a subera, subdividing Cenozoic into the old classical Tertiary and Quaternary, a compromise that was rejected by International Union of Geological Sciences because it split both Neogene and Pliocene in two. [21]

Following formal discussions at the 2008 International Geological Congress in Oslo, Norway, [22] the ICS decided in May 2009 to make the Quaternary the youngest period of the Cenozoic Era with its base at 2.58 Mya and including the Gelasian Age, which was formerly considered part of the Neogene Period and Pliocene Epoch. [23] Thus the Neogene Period ends bounding the succeeding Quaternary Period at 2.58 Mya. 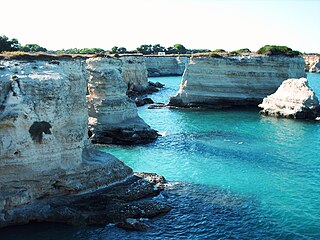 The Cenozoic is Earth's current geological era, representing the last 66 million years of Earth's history. It is characterized by the dominance of mammals, birds and flowering plants, a cooling and drying climate, and the current configuration of continents. It is the latest of three geological eras since complex life evolved, preceded by the Mesozoic and Paleozoic. It started with the Cretaceous–Paleogene extinction event, when many species, including the non-avian dinosaurs, became extinct in an event attributed by most experts to the impact of a large asteroid or other celestial body, the Chicxulub impactor.

The Pliocene is the epoch in the geologic time scale that extends from 5.333 million to 2.58 million years ago. It is the second and most recent epoch of the Neogene Period in the Cenozoic Era. The Pliocene follows the Miocene Epoch and is followed by the Pleistocene Epoch. Prior to the 2009 revision of the geologic time scale, which placed the four most recent major glaciations entirely within the Pleistocene, the Pliocene also included the Gelasian Stage, which lasted from 2.588 to 1.806 million years ago, and is now included in the Pleistocene.

The Pleistocene is the geological epoch that lasted from about 2,580,000 to 11,700 years ago, spanning the Earth's most recent period of repeated glaciations. Before a change finally confirmed in 2009 by the International Union of Geological Sciences, the cutoff of the Pleistocene and the preceding Pliocene was regarded as being 1.806 million years Before Present (BP). Publications from earlier years may use either definition of the period. The end of the Pleistocene corresponds with the end of the last glacial period and also with the end of the Paleolithic age used in archaeology. The name is a combination of Ancient Greek πλεῖστος, pleīstos, 'most' and καινός, kainós, 'new'.

The Paleogene is a geologic period and system that spans 43 million years from the end of the Cretaceous Period 66 million years ago (Mya) to the beginning of the Neogene Period 23.03 Mya. It is the beginning of the Cenozoic Era of the present Phanerozoic Eon. The earlier term Tertiary Period was used to define the span of time now covered by the Paleogene Period and subsequent Neogene Period; despite no longer being recognised as a formal stratigraphic term, 'Tertiary' is still widely found in earth science literature and remains in informal use. Paleogene is often abbreviated "Pg".

The Quaternary is the current and most recent of the three periods of the Cenozoic Era in the geologic time scale of the International Commission on Stratigraphy (ICS). It follows the Neogene Period and spans from 2.58 million years ago to the present. The Quaternary Period is divided into two epochs: the Pleistocene and the Holocene.

Tertiary is a widely used but obsolete term for the geologic period from 66 million to 2.6 million years ago. The period began with the demise of the non-avian dinosaurs in the Cretaceous–Paleogene extinction event, at the start of the Cenozoic Era, and extended to the beginning of the Quaternary glaciation at the end of the Pliocene Epoch. The time span covered by the Tertiary has no exact equivalent in the current geologic time system, but it is essentially the merged Paleogene and Neogene periods, which are informally called the Early Tertiary and the Late Tertiary, respectively. The Tertiary established the Antarctic as an icy island continent. 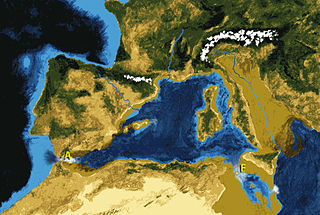 The Zanclean is the lowest stage or earliest age on the geologic time scale of the Pliocene. It spans the time between 5.332 ± 0.005 Ma and 3.6 ± 0.005 Ma. It is preceded by the Messinian Age of the Miocene Epoch, and followed by the Piacenzian Age.

The Piacenzian is in the international geologic time scale the upper stage or latest age of the Pliocene. It spans the time between 3.6 ± 0.005 Ma and 2.588 ± 0.005 Ma. The Piacenzian is after the Zanclean and is followed by the Gelasian.

The Messinian is in the geologic timescale the last age or uppermost stage of the Miocene. It spans the time between 7.246 ± 0.005 Ma and 5.333 ± 0.005 Ma. It follows the Tortonian and is followed by the Zanclean, the first age of the Pliocene.

The Serravallian is, in the geologic timescale, an age or a stage in the middle Miocene Epoch/Series, which spans the time between 13.82 Ma and 11.63 Ma. The Serravallian follows the Langhian and is followed by the Tortonian.

The Chattian is, in the geologic timescale, the younger of two ages or upper of two stages of the Oligocene Epoch/Series. It spans the time between 27.82 and23.03 Ma. The Chattian is preceded by the Rupelian and is followed by the Aquitanian.

A system in stratigraphy is a sequence of strata that were laid down together within the same corresponding geological period. The associated period is a chronological time unit, a part of the geological time scale, while the system is a unit of chronostratigraphy. Systems are unrelated to lithostratigraphy, which subdivides rock layers on their lithology. Systems are subdivisions of erathems and are themselves divided into series and stages.

The European Land Mammal Mega Zones are zones in rock layers that have a specific assemblage of fossils (biozones) based on occurrences of fossil assemblages of European land mammals. These biozones cover most of the Cenozoic, with particular focus having been paid to the Neogene and Paleogene systems, the Quaternary has several competing systems. In cases when fossils of mammals are abundant, stratigraphers and paleontologists can use these biozones as a more practical regional alternative to the stages of the official ICS geologic timescale. European Land Mammal Mega Zones are often also confusingly referred to as ages, stages, or intervals.

The Early Pleistocene is an unofficial sub-epoch in the international geologic timescale in chronostratigraphy, being the earliest division of the Pleistocene Epoch within the ongoing Quaternary Period. It is currently estimated to span the time between 2.580 ± 0.005 Ma and 0.773 ± 0.005 Ma. The term Early Pleistocene applies to both the Gelasian Age and the Calabrian Age. 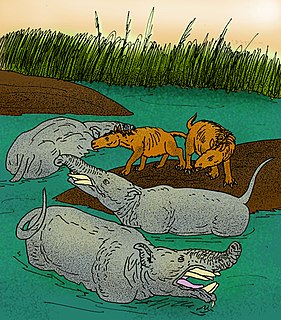 Wikisource has original works on the topic: Cenozoic#Neogene
This page is based on this Wikipedia article
Text is available under the CC BY-SA 4.0 license; additional terms may apply.
Images, videos and audio are available under their respective licenses.