Neotropical Birds Online is an online encyclopedia whose subject is the bird species that breed in the Neotropics.

Neotropical Birds Online is patterned after Birds of North America . Each account profiles a single species, and the accounts are published in the order in which they are completed. The project is sponsored by the Cornell Lab of Ornithology at Cornell University, a leading US research center in ornithology. The list of species covered by Neotropical Birds Online is based on the two avian checklist committees of the American Ornithologists' Union: the North American Classification Committee (NACC), which is responsible for the taxonomy and nomenclature of bird species found in North and Central America, including the Caribbean; and the South American Classification Committee, which covers the birds of South America and of related islands.

Birds of North America is a comprehensive encyclopedia of bird species in the United States and Canada, with substantial articles about each species. It was first published as a series of 716 printed booklets, prepared by 863 authors, and made available as the booklets were completed from 1992 through 2003. The project was overseen by the American Ornithologists' Union in partnership with the Academy of Natural Sciences of Philadelphia.

The Cornell Lab of Ornithology is a member-supported unit of Cornell University in Ithaca, New York which studies birds and other wildlife. It is housed in the Imogene Powers Johnson Center for Birds and Biodiversity in Sapsucker Woods Sanctuary. Approximately 250 scientists, professors, staff, and students work in a variety of programs devoted to the Lab's mission: interpreting and conserving the Earth's biological diversity through research, education, and citizen science focused on birds. Work at the Lab is supported primarily by its 75,000 members. The Cornell Lab publishes books under the Cornell Lab Publishing Group, a quarterly publication, Living Bird magazine, and a monthly electronic newsletter. It manages numerous citizen-science projects and websites, including the Webby Award-winning All About Birds.

Each species account has a consistent format. The content of each account provides comprehensive information for each species. The topics that are covered include identification, distribution and habitat, foraging and reproductive behavior, the conservation status of the species, and the author's suggestions for the highest priorities for future research on that species. Also provided are a map of the distribution of the species and, when available, photographs of the species, its habitat, and of the nest and eggs. Also provided, when available, are recordings of the species' song and calls, selected from the collection in the Macaulay Library at the Cornell Lab of Ornithology and from other online sources, such as xeno-canto.

The Macaulay Library is the world's largest archive of animal sounds. It includes more than 175,000 audio recordings covering 75 percent of the world's bird species. There are an ever-increasing numbers of insect, fish, frog, and mammal recordings. The video archive includes over 50,000 clips, representing over 3,500 species. The Library is part of Cornell Lab of Ornithology of the Cornell University.

xeno-canto is a citizen science project and repository in which volunteers record, upload and annotate recordings of birdsong and bird calls. Since it began in 2005, it has collected over 400,000 sound recordings from more than 10,000 species worldwide, and has become one of the biggest collections of bird sounds in the world. All the recordings are published under one of the Creative Commons licenses, including some with open licences. 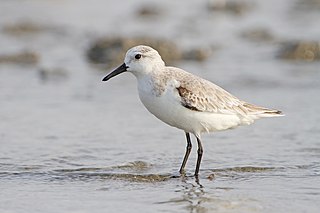 The sanderling is a small wading bird. The name derives from Old English sand-yrðling, "sand-ploughman". The genus name is from Ancient Greek kalidris or skalidris, a term used by Aristotle for some grey-coloured waterside birds. The specific alba is Latin for "white".

The eastern bluebird is a small thrush found in open woodlands, farmlands, and orchards. It is the state bird of Missouri and New York. 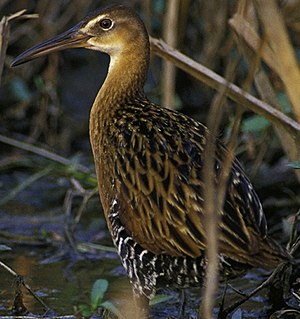 The king rail is a waterbird, the largest North American rail.

The grey-breasted martin is a large swallow from Central and South America.

The snowy-bellied hummingbird, sometimes placed in the genus Saucerottia, is a species of hummingbird in the family Trochilidae. It is sometimes known by the name snowy-breasted hummingbird.

The lazuline sabrewing is a species of hummingbird in the family Trochilidae.

The white-vented plumeleteer is a species of hummingbird in the family Trochilidae.

The Cuban emerald is a species of hummingbird in the family Trochilidae. It is found in a wide range of semi-open habitats in Cuba, the Isle of Pines, and the western Bahamas. This bird is known locally as zun-zun, and can be observed to be feeding throughout the day, perching on a wire to rest.

The white-necked puffbird is a species of puffbird in the family Bucconidae.

The pheasant cuckoo is a species of neotropical cuckoo in the subfamily Neomorphinae of the Cuculidae family. It is native to Central and South America where it occurs in lowland tropical forest.

The Cuban blackbird is a species of bird in the family Icteridae.

The cinnamon-vented piha is a species of bird in the family Cotingidae. It is endemic to southeastern Brazil.

The unadorned flycatcher is a species of bird in the family Tyrannidae. It is found in Bolivia and Peru.

The golden-naped tanager is a species of bird in the family Thraupidae. It is found in Bolivia, Colombia, Ecuador, and Peru. Its natural habitats are subtropical or tropical moist montane forests and heavily degraded former forest. 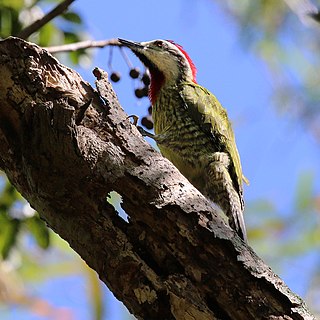 The Cuban green woodpecker is a species of bird in the family Picidae. It is the only species within the genus Xiphidiopicus and is endemic to Cuba.