Netsuke ( 根付 ) [netsɯke] are miniature sculptures that were invented in 17th-century Japan to serve a practical function.

Traditional Japanese garments—robes called kosode and kimono —had no pockets; however, men who wore them needed a place to store their personal belongings, such as pipes, tobacco, money, seals, or medicines. Their solution was to place such objects in containers (called sagemono ) hung by cords from the robes' sashes ( obi ). The containers may have been pouches or small woven baskets, but the most popular were beautifully crafted boxes ( inrō ), which were held shut by ojime , which were sliding beads on cords. Whatever the form of the container, the fastener that secured the cord at the top of the sash was a carved, button-like toggle called a netsuke.

Netsuke, like the inrō and ojime, evolved over time from being strictly utilitarian into objects of great artistic merit and an expression of extraordinary craftsmanship. Such objects have a long history reflecting the important aspects of Japanese folklore and life. Netsuke production was most popular during the Edo period in Japan, around 1615–1868. Today, the art lives on, and some modern works can command high prices in the UK, Europe, the USA, Japan and elsewhere. Inexpensive yet faithful reproductions are available in museums and souvenir shops.

Okimono , small and purely decorative sculptures, were often made by the same artists who produced netsuke.

The term is formed from the two Japanese characters ne+tsuke, meaning "root" and "to attach". In English the word may be italicized or not, with American English tending to favour the former and British English the latter. [1] [2]

According to Bushell (13/ 2:6), "The literal translation... is seapine.... Whether literal or figurative the translation is a misnomer, as the material is, in actuality, a coral formed by skeletons of living organisms.... In color, umimatsu, black coral, is black or blackish brown, sometimes showing streaks of light brown or dirty yellow." Bushell goes on: "As material, umimatsu is more acceptable to collectors than carvers. Leading carvers naturally avoided the material. It was prone to crack, crumble or chip. Carvers find that it is risky for carving details and subtle effects. Perfect pieces of black coral were difficult to obtain."

Like many other art forms, netsuke reflect the nature of the society that produced them. This effect is particularly pronounced in netsuke, owing to long periods of isolation imposed both by geography and internal politics and limited avenues of self-expression for Japanese citizens due to custom and law. [6] [7] [8] As a result, netsuke display every aspect of Japanese culture, including its rich folklore and religion, crafts, trades, and professions, all types of people and creatures, both real and imagined, and every kind of object. As in other aspects of Japanese culture, the subjects portrayed by netsuke trend, over the long term, away from an initial emphasis on motifs of Chinese derivation toward a focus on objects of more strictly national interest. [9]

Some netsuke represent single, simple, objects, and some depict entire scenes from history, mythology, or literature. 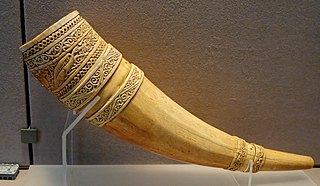 Ivory is a hard, white material from the tusks and teeth of animals, that consists mainly of dentine, one of the physical structures of teeth and tusks. The chemical structure of the teeth and tusks of mammals is the same, regardless of the species of origin. The trade in certain teeth and tusks other than elephant is well established and widespread; therefore, "ivory" can correctly be used to describe any mammalian teeth or tusks of commercial interest which are large enough to be carved or scrimshawed. 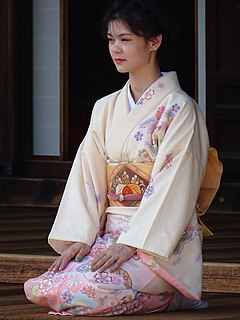 The kimono (きもの/着物) is a traditional Japanese garment and the national dress of Japan. The kimono is a T-shaped garment wrapped left over right, and is worn with an obi alongside accessories such as zōri and tabi socks. 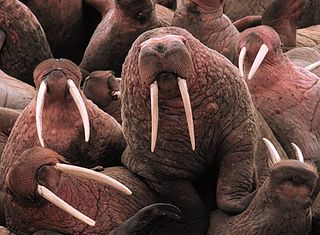 Walrus tusk ivory comes from two modified upper canines. It is also known as morse. The tusks of a Pacific walrus may attain a length of one meter. Walrus teeth are also commercially carved and traded. The average walrus tooth has a rounded, irregular peg shape and is approximately 5 cm in length. 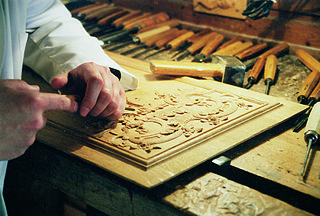 Irezumi are traditional Japanese tattoos. Irezumi is the Japanese word for tattoo, and Japanese tattooing has had its own distinct style created over centuries. Irezumi is done by hand, using wooden handles and metal needles attached via silk thread. This method also requires special ink called Nara ink (zumi). It is a painful and time-consuming process, done by a limited number of specialists. The tattoo artist is called a Horishi, and usually has one or more apprentices working for him for a long period of time. They were admired figures of bravery and roguish sex-appeal, which inspired imitation. At the beginning of the Meiji period the Japanese government outlawed tattoos, and Irezumi took on connotations of criminality. Many yakuza and other criminals now avoid tattoos for this very reason. 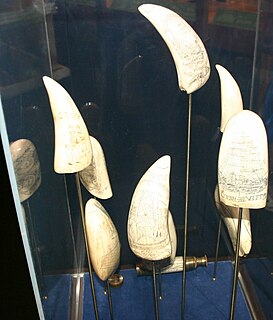 Scrimshaw is scrollwork, engravings, and carvings done in bone or ivory. Typically it refers to the artwork created by whalers, engraved on the byproducts of whales, such as bones or cartilage. It is most commonly made out of the bones and teeth of sperm whales, the baleen of other whales, and the tusks of walruses. It takes the form of elaborate engravings in the form of pictures and lettering on the surface of the bone or tooth, with the engraving highlighted using a pigment, or, less often, small sculptures made from the same material. However the latter really fall into the categories of ivory carving, for all carved teeth and tusks, or bone carving. The making of scrimshaw probably began on whaling ships in the late 18th century and survived until the ban on commercial whaling. The practice survives as a hobby and as a trade for commercial artisans. A maker of scrimshaw is known as a scrimshander. The word first appeared in print in the early 19th century, but the etymology is uncertain. 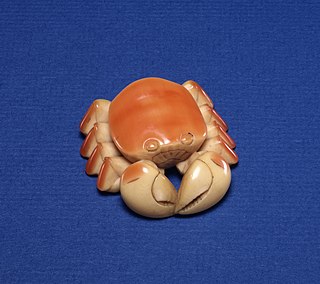 Hornbill ivory is a precious ornamental material derived from the helmeted hornbill, a large bird of the Malay Peninsula, Sumatra, and Borneo.

Craft in Japan has a long tradition and history. Included are handicraft by an individual or a group, and a craft is work produced by independent studio artists, working with traditional craft materials and/or processes.

An inro (印籠) is a traditional Japanese case for holding small objects, suspended from the obi (sash) worn around the waist. They are often highly decorated, in a variety of materials and techniques, in particular often using lacquer. 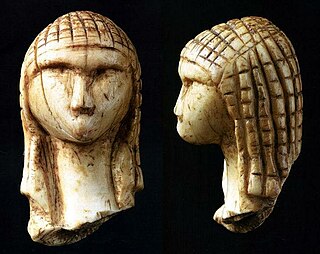 Ivory carving is the carving of ivory, that is to say animal tooth or tusk, generally by using sharp cutting tools, either mechanically or manually. 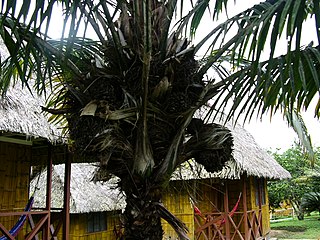 Phytelephas is a genus containing six known species of palms, occurring from southern Panama along the Andes to Ecuador, Bolivia, Colombia, northwestern Brazil, and Peru. They are commonly known as ivory palms, ivory-nut palms or tagua palms; the scientific name Phytelephas means "plant elephant". This and the first two of the common names refer to the very hard white endosperm of their seeds, which resembles elephant ivory.

Nick Lamb is a sculptor specialising in the Japanese art form of netsuke. One of a handful of non-Japanese carvers of netsuke, Lamb has built a reputation since the 1980s as one of the best living practitioners of this art. He is known for meticulous, graceful carvings, typically of animals. His preferred medium for carving is boxwood. Lamb was born in 1948 in Cambridge, England, and educated at Berkshire College, Maidenhead, Berkshire, England. He originally trained as a graphic designer, and was introduced to netsuke by someone who had seen a miniature carving he had done as a pastime. He began to carve full-time in 1988 and moved to the United States in 1995 to be closer to fellow carvers and netsuke collectors.

Kongo ivories are some of the finest sculptural works produced by the people of the west-central Africa's Lower Congo region. In the Kongo Kingdom, ivory was a precious commodity that was strictly controlled by chiefs and kings, who commissioned sculptors to produce fine ivory sculptures for their personal and courtly use. With the rise of the transatlantic trade, ivory became one of the most valuable African natural resources sought by Western industry. Eventually, Kongo ivory carvers produced works not only for indigenous leaders and elites but also for Europeans and other foreigners.

Owen Thomas Mapp is a New Zealand carver who works primarily in bone. 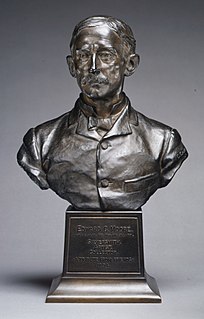 Edward Chandler Moore was a noted American silversmith, art collector, and benefactor of the Metropolitan Museum of Art.

Masanao was a noted Japanese sculptor of netsuke from Kyoto area. He is thus associated with the Kyoto school. His works often depict animals, and he is considered to have been one of the greatest artists working in the netsuke art form.

Tom Akeya is an Inuit ivory carver. His work has been sold in multiple places.