Nevio Scala (Italian pronunciation:  [ˈnɛvjo ˈskala] ; born 22 November 1947) is an Italian football sporting director, coach and former player, who currently serves as the president of Italian club Parma. Throughout his footballing career, he played as a midfielder for several Italian clubs, and won several titles during his time with A.C. Milan. As a manager, he is mostly known for his role as head coach of Parma during the club's golden age of the 1990s, which saw him lead the team from Serie B to several European triumphs.

Born in Lozzo Atestino, Province of Padua, Veneto, Scala enjoyed a successful career as a midfielder for several Italian top-flight teams — Roma, Milan, Vicenza and Internazionale — and subsequently played for lower-ranked clubs Foggia, Monza and Adriese in the final years of his career. As a player, with A.C. Milan, he won 1 Italian Championship (1967–68), 1 European Champions Cup (1968–69), and 1 European Cup Winners' Cup (1967–68).

As a coach, he led Calabrian third division club Reggina to Serie B in 1988, and then moved to Serie B club Parma. He held that position for six years, leading the Emilian club to its first promotion to the Italian top flight in 1990, and subsequently turned the team into one of the major clubs in the Italian Serie A, thanks also to the relevant financial backing from chairman and Parmalat founder Calisto Tanzi, winning several domestic and European titles. During his time at Parma, Scala won the Coppa Italia in 1992, the Cup Winners' Cup and the European Super Cup in 1993, and the UEFA Cup in 1995. He also managed runners-up medals in the Coppa Italia in 1995, in the Cup Winners' Cup in 1994, and twice in the Supercoppa Italiana in 1992 and 1995, while his best result in the league was a third-place finish during the 1994–95 Serie A season. He left Parma in June 1996. [1]

During the 1996–97 season, Scala accepted an offer from Luciano Gaucci to become head coach of struggling Perugia, but did not manage to escape relegation to Serie B for his side.

He successively pursued a number of experiences abroad, becoming head coach of German club Borussia Dortmund in 1997, with whom he won the Intercontinental Cup. He left the club in 1998. In 2000, he became another Italian coach after Giuseppe Meazza, Sandro Puppo to manage a Turkish team by accepting an offer from Beşiktaş, and then went on to serve as head coach for Ukraine's FC Shakhtar Donetsk where he won Ukraine Champion and Cup 2002 and Russians Spartak Moscow winning the Russian Cup 2003, the latter being his last head coaching experiences to date.

He currently lives in his hometown city of Lozzo Atestino, where he is member of the local city council since 2007, [2] after running unsuccessfully as mayor in 2007. [3] He is currently active as a football pundit for Rai Radio 1, where he regularly comments Serie A games and gives his answers to live phone comments and questions on Sunday late night show Domenica sport. [4]

Scala has expressed a desire to return to coaching, being linked with Motherwell F.C. [5] and later with A.S. Roma [6] in 2010.

In July 2015, he was confirmed as new chairman of a refounded Parma, after the original club folded due to financial issues, [7] while former player Luigi Apolloni was chosen as head coach. [8] Parma managed to return to the professional Italian leagues that season, and clinched promotion from Serie D into Lega Pro on 17 April 2016. [9]

Parma Calcio 1913, commonly referred to as Parma, is an Italian football club based in Parma, Emilia-Romagna. It currently plays in Serie A. 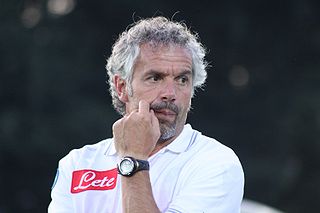 Roberto Donadoni is an Italian football manager and former midfielder, who is the current head coach of Chinese club Shenzhen F.C..

Associazione Calcistica Perugia Calcio, previously A.C. Perugia, Perugia Calcio and commonly referred to as simply Perugia, is an Italian football club based in Perugia, Umbria. Founded in 1905 has amongst its best records a runners-up in 1978–79 Serie A season, in which they finished unbeaten, and the 2003 UEFA Intertoto Cup. The team currently plays in Serie B after promotion from Lega Pro Prima Divisione in 2013–14 season.

Arrigo Sacchi is an Italian former professional football coach. He was twice manager of Milan, with great success. He won the Serie A title in his 1987–88 debut season and then dominated European football by winning back to back European Cups in 1989 and 1990. From 1991 to 1996, he was head coach of the Italy national team and led them to the 1994 FIFA World Cup Final, only to lose to Brazil in a penalty shoot-out. 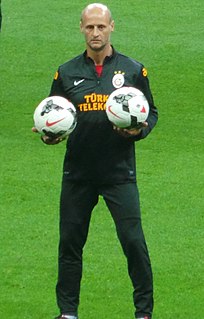 Attilio Lombardo is a retired football player turned manager; he is currently the assistant manager for the Italy national team. Throughout his career he was usually deployed as a wide midfielder, or as an offensive right winger, although he also played as a fullback or wingback on occasion later in his career.

Giuseppe Pancaro is a former Italian football defender turned coach. He is the manager of Pistoiese.

Francesco Antonioli is an Italian former footballer who played as goalkeeper. He was the oldest footballer in Serie A until his club Cesena were relegated to Serie B at the end of the 2011–12 season, after which he retired from professional football. Antonioli began his club career with Monza and played for several Italian clubs throughout his career, winning titles with A.C. Milan, Bologna and Roma. Despite never being capped at senior international level, he was an unused member of the Italy squad the took part at Euro 2000, reaching the final. At youth level, he represented Italy at the 1992 Summer Olympics.

Luigi Apolloni is an Italian football manager and former player, who played as a centre-back. At club level, Apolloni is mainly remembered for his time with Italian side Parma Calcio 1913, where he won several titles during his 13 seasons with the club. At international level, he was a member of the Italy national football team that reached the final of the 1994 FIFA World Cup.

Antonio Benarrivo is an Italian former professional footballer who played as a defender. One of the best players in the world in his position in the 1990s, Benarrivo was an energetic attacking full-back capable of operating on both wings; he began his career with Brindisi in 1986, and later moved to Padova in 1989. He came to prominence during his time with Parma, joining the club in 1991; he won several domestic and European titles with the team and eventually became the club's record appearance holder in Serie A and in European competitions.

Diego Fuser is an Italian former professional footballer, who played as a midfielder, mainly on the right wing, although he was also capable of playing in the centre. Fuser was a quick, hard-working, and energetic player, with good technique, and crossing ability, who excelled at making offensive runs down the right flank and assisting strikers with accurate crosses. A tenacious, and physically strong winger, he also possessed notable stamina, a powerful shot from distance, and was accurate from set-pieces.

Lorenzo Minotti is an Italian former professional footballer who played as a defender. Throughout his club career, he played for Italian sides Cesena, Parma, Cagliari, Torino, and Treviso; he is mostly remembered for his successful stint with Parma, where he won several domestic and international titles as the club's captain. At international level, he represented Italy on eight occasions between 1994 and 1995, and was a non-playing member of the team that reached the 1994 FIFA World Cup Final.

Alberto Malesani is an Italian association football manager and former footballer. As a manager, he is mostly remembered for his successful spell with Parma during the late 90s, where he won the Coppa Italia, the UEFA Cup, and the Supercoppa Italiana.

Alberto Di Chiara is an Italian former professional footballer, who played for Roma, Reggiana, Lecce, Fiorentina, Parma and Perugia, as well as for the Italian national side, as a winger and full back. He is the younger brother of the Italian footballer Stefano Di Chiara.

Parma Associazione Calcio played its sixth consecutive Serie A season, which was the last under legendary coach Nevio Scala, who stepped down at the end of the season. Defensive stalwarts Alberto Di Chiara and Lorenzo Minotti also left the club following the season's conclusion. Despite being only one point behind third-placed Lazio, Parma finished 6th in the standings. In contrast to the previous four seasons, Parma did not win any cups either. The most significant moment of Parma's season was the debut of the club's new superstar, 17-year-old goalkeeper Gianluigi Buffon, who saved a penalty on his debut against A.C. Milan.

The history of S.S.D. Parma Calcio 1913 covers nearly 100 years of the football from the club based in Parma, Italy. Established in 1913 the club would eventually go on to win titles on the national and international stage. The club is most famous for the period in which it collected all of its eight major titles, between 1992 and 2002. The club was declared bankrupt in 2015.