The New National Theatre, Tokyo (NNTT) (新国立劇場, Shin Kokuritsu Gekijō) is Japan's first and foremost national centre for the performing arts, including opera, ballet, contemporary dance and drama. It is located in the Shinjuku area of Tokyo. Since 1997 more than 650 productions were staged. There are about 300 performances per season with approximately 200,000 theatergoers. [1] The centre has been praised for its architecture and state-of-the-art modern theatre facilities, which are considered among the best in the world. In 2007, the NNTT was branded with the advertising slogan: Opera Palace, Tokyo. [2]

The construction of the NNTT was completed in February 1997. Its first public performances took place in October of that year. The Tokyo Opera City Tower is connected to the theatre. It has concert halls, an art gallery, a media-art museum, office space, many restaurants and shops. The combined complex of the skyscraper tower and the theatre is called the "Tokyo Opera City".

The arts management of NNTT, including the enterprises in above, is commissioned to New National Theatre Foundation (NNTF) from the independent administrative institution, known as The Japan Arts Council. NNTT is managed by several trust funds, government grants, admission revenues, and private donations from many supporting companies.

The NNTT has been repeatedly criticized for its bureaucratic arts administration, which is very representative of usual Japanese politics. Although NNTT is financed by the Japanese government, major conductors, directors, and performing artists have all complained that their creative ideas are restricted by the bureaucratic style of the arts management. [3] [4] In 2010, the government decided to cut down the ¥4.8 billion grant NNTT received the previous year by half, and reduce the government grants to trainees who want to work and study abroad. [5]

The company's productions are usually conservative, and the principal lead singers are frequently drawn from a circle of top foreign opera singers from Europe and elsewhere. World-class Japanese singers who are famous abroad are often invited to sing lead roles as well. To introduce Japanese-related works into the operatic world, the NNTO has embarked on producing works such as Shuzenji Monogatari, composed by Osamu Shimizu (June 2009), and Ikebe Shinichiro's Rokumeikan (June, 2010).

The current Artistic Director of the New National Theatre Ballet (otherwise known as NNTB) is Asami Maki, who previously led the Maki Asami Ballet Troupe in Tokyo. Frequent foreign guest artists include Svetlana Zakharova and Denis Matvienko. The company's balletic identity draws from Russian, British, and French classical ballet traditions. David Bintley who is the current Artistic Director of the Birmingham Royal Ballet will lead the NNTB Company as the Co-Artistic Director with Asami Maki from 2010. The NNBT has performed at the Kennedy Center in Washington, D.C. (Asami Maki's Raymonda in February 2008), and will also perform Asami Maki's version of La dame aux camellias, as a guest company at the Bolshoi Theatre in September 2009. The NNTB is striving to become Asia's best ballet company as well as an internationally recognized company (Top 10) in the next few years.

In the summer of 2008, the government-appointed theater board officials decided to replace artistic director Hitoshi Uyama with Keiko Miyata. The decision was announced at a June 30 board meeting, taking many of the board members by surprise because no prior discussion of replacing the director had taken place. When one of the board members, Ai Nagai, tried to question the decision, her questions were ignored by the board presidency. Nagai later went public with her questions on the decision in a statement signed by other prominent theater dramatists, including Hisashi Inoue, Yukio Ninagawa, and Yōji Sakate, but the board never responded to the questions. [3] [4] 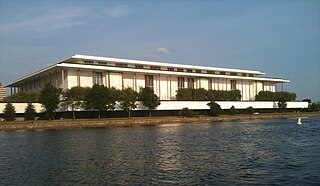 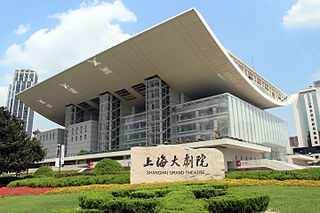 The Shanghai Grand Theater is one of the largest and best-equipped automatic stages in the world. Since the theater opened on August 27, 1998, it has staged over 6,000 performances of operas, musicals, ballets, symphonies, chamber music concerts, spoken dramas and various Chinese operas. The site is located at the intersection of Central Boulevard and Huangpi Road South in the northern part of the People's Square in Huangpu District, Shanghai. It is the home of the Shanghai Opera House Company; however, the title "Shanghai Opera House" officially applies to only the performing company and not to the building. The Shanghai Grand Theater is also the resident for other performing companies.

The Imperial Theatre, often referred to simply as the Teigeki (帝劇), and previously the Imperial Garden Theater, is a Japanese theater located in Marunouchi, Chiyoda, Tokyo, Japan operated by Toho. Opened in 1911 as the first Western-style theater in Japan, it stages a varied program of musicals and operas. The original structure was rebuilt in 1966 as Tōhō's "flagship" theater, opening with the premiere of Scaretto, a local adaptation of Gone With the Wind, which drew 380,000 attendees over the course of the theater's first five months of operation.

Hiroshi Wakasugi was a Japanese orchestra conductor. He premiered many of the major Western operas in Japan, and was honoured with many awards for cultural achievement. He was best known for conducting works by German composers such as Richard Wagner, Anton Bruckner, Gustav Mahler, and Richard Strauss.

The National Centre for the Performing Arts (NCPA), and colloquially described as The Giant Egg (巨蛋), is an arts centre containing an opera house in Beijing, People's Republic of China. Designed by French architect Paul Andreu, the NCPA is the largest theatre complex in Asia. The NCPA is semi-spherical in appearance, with a long axis length of 212.20 meters in the east-west direction, a short axis length of 143.64 meters in the north-south direction, a height of 46.285 meters, an area of 119,900 square meters, and a total construction area of approximately 165,000 square meters, including 105,000 square meters of main buildings and 60,000 square meters of underground, auxiliary facilities, with a total cost of 3.067 billion yuan. There are Opera hall, Music hall, theater and art exhibition halls, restaurants, audio shops, and other supporting facilities.

The National Theatre is a theatre located in Belgrade, Serbia.

The National Theatre is a 783-seat Australian theatre and theatrical arts school located in the Melbourne bayside suburb of St Kilda, on the corner of Barkly and Carlisle Streets. The building was constructed in 1921 as The Victory Theatre, rebuilt as 2550 seat cinema in 1928, finally converted to a live venue 1972/4 with 783 seats. 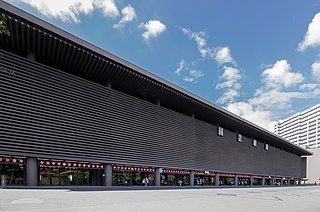 The National Theatre of Japan is a complex consisting of three halls in two buildings in Hayabusachō, a district in Chiyoda, Tokyo, Japan. The Japan Arts Council, an Independent Administrative Institution of the Ministry of Education, Culture, Sports, Science and Technology, operates the National Theatre. It primarily stages performances of traditional Japanese performing arts. 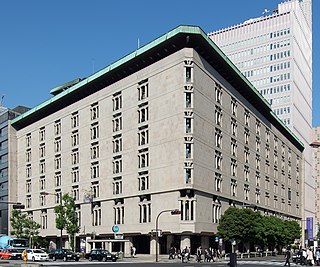 The Nissay Theatre is a theatre in Chiyoda, Tokyo, Japan. It is located in the Nissay Hibiya Building, designed by the architect Togo Murano. It was completed in 1963 and opened with a performance by the Deutsche Oper Berlin. Since then it has been used to stage productions of the performing arts, Kabuki, operas, and musicals. For many years, until the company acquired its first permanent theater, it staged numerous productions by the Shiki Theatre Company.

The National Bunraku Theatre is a complex consisting of two halls and an exhibition room, located in Chūō-ku, Osaka, Japan. The complex was opened in 1984 as the fourth national theatre of the country, to become the headquarters of bunraku. The Japan Arts Council, an Independent Administrative Institution of the Ministry of Education, Culture, Sports, Science and Technology, operates the National Theatre.

The Dayton Ballet is a ballet company based in Dayton, Ohio. 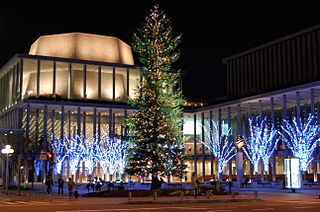 The Latvian National Opera and Ballet (LNOB) is an opera house and opera company at Aspazijas boulevard 3 in Riga. Its repertoire includes performances of opera and ballet presented during the season which lasts from mid-September to the end of May. During a typical season, LNOB presents almost 200 performances, including, on average, 6 new productions. The largest is the Great Hall which houses 946 seats, while the smaller ones - the New Hall, the Dress Circle Hall (Beletāžas zāle) and the Red Hall - have a maximum seating capacity of 338, 170 and 100 respectively. LNOB employs a total of approximately 600 people. The building is located on the bank of the Riga Canal, near the Freedom Monument. As of November 5, 2019, the chairman of the board is Egils Siliņš, a world renowned opera singer. The chief conductor since 2013 is Mārtiņš Ozoliņš who is also an associate professor at the Jāzeps Vītols Latvian Academy of Music. The artistic director since 1993 is Aivars Leimanis.

Haruhisa Handa is a Japanese religious leader and a businessman. Handa is the Chairman and spiritual leader of the Shinto-based religion World Mate. He is also known by the name Toshu Fukami Toshu Fukami in his artistic career, as well as the pen name Toto Ami Toto Ami. He also uses the pseudonym Leonardo Toshu, which is used as his radio personality.

Noriko Ohara is a Japanese artistic director and retired ballet dancer. She was a principal dancer with the Scottish Ballet from 1976 to 1995. Since 2014, she has been the artistic director of the National Ballet of Japan at the New National Theatre, Tokyo. Ohara was awarded an honourary Order of the British Empire (OBE) in 1997 and was named to Japan's Order of the Rising Sun in 2014.