The 2NZEF was led by General Bernard Freyberg.

The New Zealand Expeditionary Force (NZEF) was the title of the military forces sent from New Zealand to fight for Britain during World War I. Upon the outbreak of war, New Zealand immediately offered to provide two brigades—one of infantry and one of mounted troops—with a total of 8,500 men. As was the case with the Australian army the existing New Zealand army was a "territorial" force, designed for the defense of the home islands. It could not be deployed overseas. Hence, it was necessary to form a volunteer "expeditionary" force. The initial contingent of the NZEF, known as the "Main Body," sailed on 16 October 1914 for Australia and then joined with the Australian Imperial Force (AIF) in a convoy that sailed for Egypt on 1 November. The NZEF and AIF convoy was originally bound for Britain but diverted en route to Egypt because of the state of the training camps in England. As a result, the troops were dressed in woolen uniforms for the British climate. On 2 December the convoy reached Alexandria after passing through the Suez Canal. Disembarking the troops traveled by train for Cairo, bivouacking in tent camps within sight of the Pyramids.

The NZEF was commanded throughout the war by Major General Alexander Godley, a British Army officer who in 1910, on the recommendation of Lord Kitchener, had been appointed as the commander of the New Zealand Military Forces. After Godley departed with the NZEF in October 1914, Major General Alfred William Robin commanded the New Zealand Military Forces at home throughout the war as commandant, and was pivotal in ensuring the ongoing provision of reinforcements and support to the NZEF. [1]

Major General George Napier Johnston CB CMG DSO (1867–1947) served with New Zealand forces during World War I as director of ordnance and commander of permanent artillery in the New Zealand Defence Force from the outset of World War I during 1914–1918.

New Zealand, like Australia, had a pre-war policy of compulsory military training, but, like Australia, New Zealand's Territorial Army could not be deployed overseas. Thus, the NZEF was initially composed solely of volunteers. Conscription was introduced on 1 August 1916 and by the end of the war 124,000 men—nearly half the eligible male population of 250,000—had served with the NZEF. Of these, about 100,000 had been sent overseas.

The mounted arm of the NZEF was the New Zealand Mounted Rifles Brigade. The brigade remained in Egypt and, combined with the 1st and 2nd Australian Light Horse Brigades, made up the ANZAC Mounted Division which served through the Sinai and Palestine campaign.

At the outbreak of World War II in September 1939, the New Zealand Government declared war on Germany. [2] Within a few days, the government pronounced the assembly of what would be an Expeditionary Force, which become known as the 2nd New Zealand Expeditionary Force (2NZEF), for service in the war. [3] After consulting with the British Government, it was decided to raise an infantry division. [4] This, the 2nd New Zealand Division, would be commanded by Major-General Bernard Freyberg, a British Army officer who had spent his early years in New Zealand and won a Victoria Cross in the First World War, ending it as a brigadier general, who had offered his services to the New Zealand Government. Freyberg would also be the commander of the 2NZEF. [5]

Service in Africa and Europe

The first echelon of 2NZEF Headquarters and a Brigade Group landed in Egypt in February 1940. The second echelon, also a Brigade Group, was diverted to Britain on Italy's entry into the war and did not reach Egypt until March 1941. The third echelon arrived in Egypt in September 1940 and concentration of the division was completed just before it was deployed to northern Greece in March 1941.

This force remained as part of the British Eighth Army to the end of World War II in 1945 during which it fought in the Battle of Greece (March–April 1941), the Battle of Crete (May), Operation Crusader (November–December), Minqar Qaim (June 1942), the First (July) and Second Battles of El Alamein (October–November), Libya and Tunisia (December–May 1943), the Sangro (October–December), the Battle of Monte Cassino (February–March 1944), the Central Italy (May–December), and the Adriatic Coast (April–May 1945). [6]

Under the command of Major-General William Stevens, the 2NZEF began demobilising in late 1945, a process that was largely completed by mid 1946.

Service in the Pacific

The 2NZEF also had a Pacific Section, which was initially responsible for the defence of Fiji. The basis for the Pacific Section was initially an infantry brigade—the 8th Infantry Brigade—which arrived on Viti Levu, the main island of Fiji, in November 1940. [7] Following the entry of the Japanese Empire into the war, in early 1942, the 2NZEF contingent in Fiji was expanded to two brigades, and formally designated Pacific Section, 2NZEF. [8] Under the command of Major General Owen Mead, the Pacific Section was withdrawn from Fiji back to New Zealand when the United States 37th Division took over defence responsibility. [9]

The Pacific Section later became the 3rd Division, the main unit of the 2NZEF in the Pacific. [10] After of period of training in New Zealand, it fought in the Solomon Islands campaign during 1943–1944, participating in the Battles of Vella Lavella, the Treasury Islands and the Green Islands, [11] although never as a full division.

In early 1944, the New Zealand Government faced a manpower crisis caused by the demands of maintaining two divisions overseas while simultaneously maintaining agricultural and industrial production to meet the needs of the Allied countries. In order to cope with this crisis the New Zealand Government saw no option other than to disband one of the country's two infantry divisions. The decision to disband the 3rd Division was made after consulting with the British and United States Governments, who were of the view that the 2nd Division's contribution to the campaign in Italy was of greater importance than the 3rd Division's contribution in the Pacific. [12]

The 3rd Division was withdrawn to New Caledonia in June 1944 and returned to New Zealand in August. The Division was rapidly downsized and was formally disbanded on 20 October 1944. About 4,000 veterans of the 3rd NZ Division were dispatched to Italy to reinforce the 2nd Division with the remaining men of the division returning to civilian employment. [13]

From 1950 onwards a division-sized force, reserves (Territorial Force) maintained by conscription, formed the principal striking force of the New Zealand Army. The division was alternatively known as 3NZEF. [14] It disbanded in 1961. 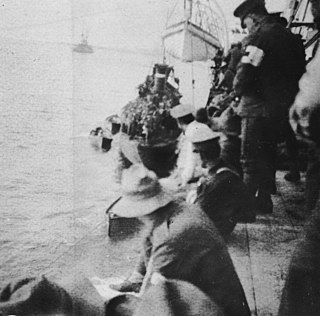 The Battle of Chunuk Bair was a World War I battle fought between the Ottoman defenders and troops of the British Empire over control of the peak in August 1915. The capture of Chunuk Bair,, the secondary peak of the Sari Bair range, was one of the two objectives of the Battle of Sari Bair. 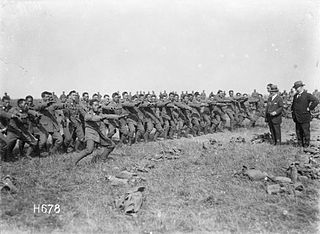 The Otago and Southland Regiment (1948-2012) was a Territorial Force unit of the New Zealand Army. It saw service from 1959-1963 during the Malayan Emergency. In 1964 the unit was renamed the 4th Otago and Southland Battalion Group. The Regiments motto was Kia Mate Toa and Regimental Belt had the Mackenzie Tartan pattern of the Queen's Own Highlanders. The regimental badge uniquely contained a full Māori chief.

Lieutenant Colonel William George Malone was an officer in the New Zealand Military Forces who served in the First World War. He commanded the Wellington Infantry Battalion during the Gallipoli Campaign, and was killed in action during the Battle of Chunuk Bair.

General Sir Alexander John Godley, was a senior British Army officer. He is best known for his role as commander of the New Zealand Expeditionary Force and II Anzac Corps during the First World War. 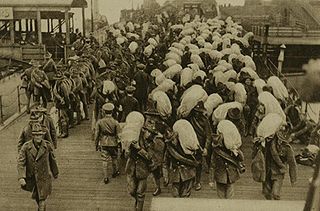 The military history of New Zealand during World War I began in August 1914. When Britain declared war on Germany at the start of the First World War, the New Zealand government followed without hesitation, despite its geographic isolation and small population. It was believed at the time that any declaration of war by the United Kingdom automatically included New Zealand; and the Governor announced that New Zealand was at war with Germany from the steps of Parliament on 5 August. 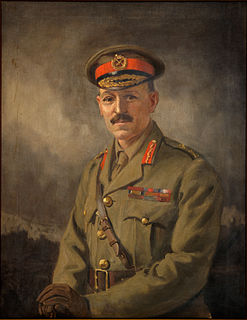 Major General Sir Andrew Hamilton Russell was a senior officer of the New Zealand Military Forces who served during the First World War. 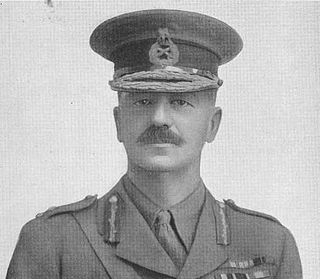 Brigadier General Francis Earl Johnston, was a New Zealand-born British Army officer of the First World War, who served in the New Zealand Expeditionary Force (NZEF) at Gallipoli and on the Western Front.

The 23rd Battalion, also known as the Canterbury-Otago Battalion, was an infantry battalion of the New Zealand Military Forces during the Second World War. Formed in November 1939 as part of the 5th Brigade, 2nd Division of the 2nd New Zealand Expeditionary Force. After undertaking training at Burnham Camp the battalion sailed from New Zealand on 1 May 1940. The battalion saw action in Greece, Crete, North Africa, and Italy. 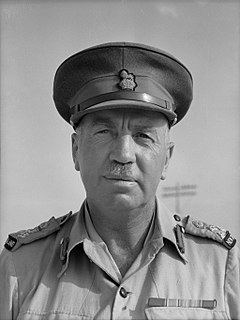 Major General Graham Beresford Parkinson, was a professional soldier in the New Zealand Military Forces who served during the First and Second World Wars. 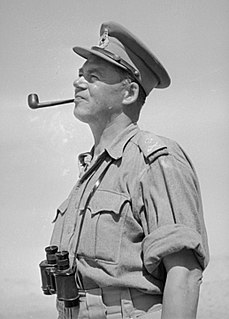 John Gethin Hughes was a New Zealand military leader. Born in Bluff, Southland, New Zealand, he served in the Boer War with the First Contingent of the New Zealand Volunteer Force to be sent to South Africa. During the war he was the first New Zealand recipient of the Distinguished Service Order. After the war he became a professional soldier and served in a number of staff positions in the New Zealand Military Forces. A member of the New Zealand Expeditionary Force during the early stages of the First World War, he commanded the Canterbury Battalion during the Gallipoli Campaign. He was eventually evacuated from Gallipoli late in the campaign for medical reasons. He retired from the military in 1917 due to poor health and died in 1954 at the age of 88.

Charles Mackie Begg was a New Zealand doctor and surgeon who served in the First World War as a medical administrator with the New Zealand Expeditionary Force.

Major Norman Frederick Hastings, DSO served as Officer Commanding New Zealand's 6th (Manawatu) Squadron, Wellington Mounted Rifles Regiment. After serving with British military units during the Second Anglo-Boer War in South Africa, he worked as an engineering fitter with the New Zealand Railways Department workshops at Petone. He enlisted in the New Zealand Expeditionary Force at the outbreak of World War I, and served with distinction before dying of wounds after the attack on Chunuk Bair, Gallipoli, in August 1915. He was awarded the Distinguished Service Order, was Mentioned in Despatches, and was one of only 14 members of the New Zealand Army to receive the French Legion of Honour decoration during the war. The memorial flagstaff at Petone railway station appears to have been erected in his honour, and was the site of New Zealand's first public Anzac Day ceremony on 25 April 1916.