In many countries, circulations are audited by independent bodies such as the Audit Bureau of Circulations to assure advertisers that a given newspaper does reach the number of people claimed by the publisher. There are international open access directories such as Mondo Times, [1] but these generally rely on numbers reported by newspapers themselves.

In many developed countries, newspaper circulation is falling due to social and technological changes such as the availability of news on the internet. On the other hand, in some developing countries circulation is increasing as these factors are more than cancelled out by rising incomes, population, and literacy.

World newspapers with the largest circulation

The World Association of Newspapers and News Publishers (WAN-IFRA) publishes a list of newspapers with the largest circulation. In 2011, India led the world in terms of newspaper circulation with nearly 330 million newspapers circulated daily. [2] In 2005, China topped the list in term of total newspaper circulation with 93.5 million a day, India came second with 78.8 million, followed by Japan, with 70.4 million; the United States, with 48.3 million; and Germany, with 22.1 million. Around 75 of the 100 best selling newspapers are in Asia and seven out of the top ten are Japanese newspapers. [3]

The Herald Sun has the highest circulation in Australia. Based in one of the country's two major cities, Melbourne, it is the result of the amalgamation of the original Sun and Herald newspapers.

The Norwegian Media Businesses' Association publishes national circulation figures for every newspaper in Norway every year. In 2011 the most read newspaper was the Oslo-based national newspaper Aftenposten, with a circulation of 235,795 followed by the tabloid Verdens Gang with 211,588. The local evening newspaper Aften averages 101,574 and the tabloid Dagbladet had 98,989 readers. The financial newspaper Dagens Næringsliv averaged 82,595. In the top ten list it is followed by five local newspapers: Bergens Tidende, 79,467; Adresseavisen, 71,657; Stavanger Aftenblad, 63,283; Fædrelandsvennen, 36,604 and Drammens Tidende, 33,352. [6]

The heyday of the newspaper industry was the 1940s, but the percentage of Americans reading newspapers began to decline with the increased competition from radio, television and, more recently, the Internet. A growing population helped the absolute circulation numbers continue to increase until the 1970s, where it remained stable until the 1990s, when absolute circulation numbers began declining.

Newspaper circulation numbers are reported to the Alliance for Audited Media. The best-selling papers in America, measured by combined daily average circulation as of March 31, 2013, are the Wall Street Journal with 2,378,827 in circulation; The New York Times at 1,865,318; and USA Today with 1,674,306. Overall, for the 593 reporting newspapers, daily circulation declined 0.7 percent year-over-year between March 2012 and March 2013. Sunday circulation was down 1.4 percent over the same period. [8]

Eenadu daily newspaper is the largest circulated Telugu newspaper in the State of Andhra Pradesh and the State of Telangana of India. According to the Indian Readership Survey (IRS) Q1 2019, Eenadu ranks at number fourth among the Indian language dailies with a total readership (TR) of 1,56,73,000. Eenadu was founded by the Indian media baron Ramoji Rao in 1974. Eenadu's rapid expansion enabled diversification of its portfolio by venturing into other markets such as finance and chit funds, foods, film production, film distribution, and a group of television channels (ETV). All the businesses are organized under the Ramoji Group. 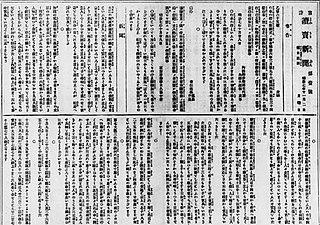 The Yomiuri Shimbun (讀賣新聞/読売新聞) is a Japanese newspaper published in Tokyo, Osaka, Fukuoka, and other major Japanese cities. It is one of the five national newspapers in Japan; the other four are The Asahi Shimbun, the Mainichi Shimbun, Nihon Keizai Shimbun, and the Sankei Shimbun. The headquarters is in Otemachi, Chiyoda, Tokyo. 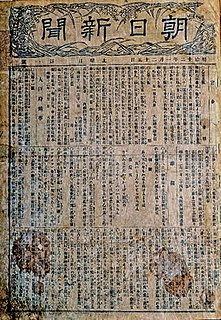 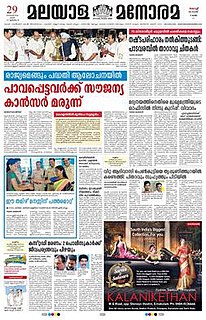 Malayala Manorama is a morning newspaper in Malayalam published from Kottayam, Kerala, India by the Malayala Manorama Company Limited. Currently headed by Mammen Mathew; it was first published as a weekly on 22 March 1890, and currently has a readership of over 20 million. It is also the second oldest Malayalam newspaper in Kerala in circulation, after Deepika, which is also published from Kottayam. Manorama also publishes an online edition.

Kompas is an Indonesian national newspaper. Published by Kompas Gramedia, it has been in publication since 28 June 1965.

The Borneo Post, established in 1978, is the largest and widest read English newspaper daily in East Malaysia. In June 2018, Reuters Institute's Digital News Report 2018 ranked The Borneo Post third in terms of brand trust of users of the brand behind first placed Astro Awani and international news website Yahoo! News.

The mass media in Brunei are strictly controlled by the government under Sultan Hassanal Bolkiah, which has effectively imposed martial law in the country since the Brunei Revolt of 1962. News coverage consists of police-beat reporting, lifestyle features and community events, with little in the way of diverse viewpoints. Reporters Without Borders reports there is "virtually no criticism of the government". The liberal democracy watchdog Freedom House lists Brunei's media as "not free". 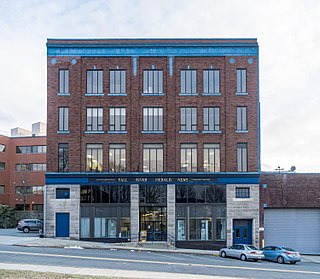 The smaller of the two main newspapers in Massachusetts' South Coast, The Herald News is a daily newspaper based in Fall River, Massachusetts. Its coverage area includes Fall River and the nearby towns of Dighton, Freetown, Somerset, Swansea and Westport, Massachusetts; and Little Compton and Tiverton, Rhode Island.

RISN Operations Inc., also called Rhode Island Suburban Newspapers, is a privately owned publisher of three daily newspapers and several weekly newspapers in the U.S. state of Rhode Island. The company was founded by Illinois-based newspaper executives in early 2007 to purchase the Rhode Island holdings of Journal Register Company, which it did for $8.3 million.

The Süddeutsche Zeitung, published in Munich, Bavaria, is one of the largest daily newspapers in Germany.