La Liga Nicaragüense de Beisbol Profesional (LNBP) was inaugurated on March 30, 1956, in Estadio Nacional. The first game was between the teams from San Fernando and Bóer. The Nicaraguan public's excitement for baseball grew as foreign professional teams and foreign players came to play in their country. Due to economic difficulty, the league had to shut down in 1967. The teams from Bóer and León were the most successful teams in those years with three championships each. The professional league was re-established in 2004. 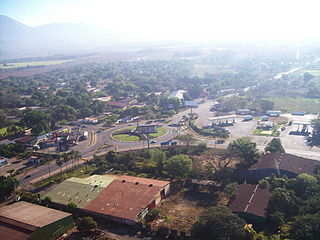 Chinandega is a city and the departmental seat of Chinandega department in Nicaragua. It is also the administrative centre of the surrounding municipality of the same name. It is Nicaragua's fifth largest city, with a population of 134,720 inhabitants (2015), and a total of 151,000 in the municipality. It is located about 134 kilometres (83 mi) northwest of Managua and about 72 kilometres (45 mi) southwest of El Guasaule, on the border with Honduras. Chinandega is about 20 kilometres (12 mi) from the Pacific Ocean. 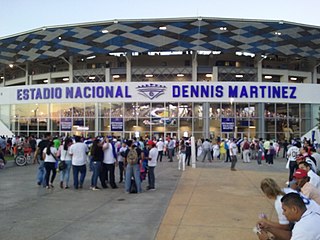 Dennis Martínez National Stadium is located in Managua, Nicaragua. It has a capacity of 15,000 and it was named after former MLB player Dennis Martínez. 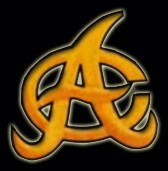 The Águilas Cibaeñas is a professional baseball team in the Dominican Republic's winter baseball league. Founded on January 28, 1933 and based in Santiago, they have won 5 Caribbean Series and 21 national titles.

The 2005-06 season of the Venezuelan Professional Baseball League was won by the team Leones del Caracas. 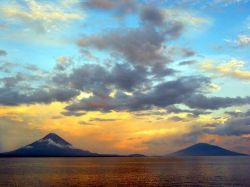 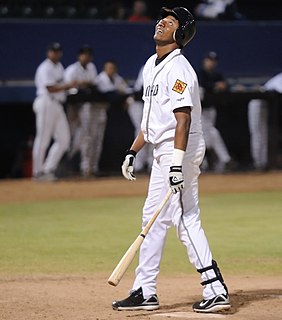 Napoleón Calzado is a former Major League Baseball player for the Baltimore Orioles. He won the bronze medal in the 2000 Pan American Championship where this national team qualified for the 2001 Baseball World Cup.

Baseball is the national game of Nicaragua, and is one of the most popular sports in the country. Nicaragua has a professional baseball league, the Nicaraguan Professional Baseball League, consisting of four teams, playing in the winter, and an amateur league, El Campeonato German Pomares, playing in spring and summer. The national baseball team has been successful in the past, mainly throughout the 1970s. In many pick-up games, players have to improvise due to lack of equipment. Often, grapefruits, and rocks are used as baseballs. Nicaragua and near-by Panama are two countries who have baseball as their national sport, rather than soccer, the national sport of many Central American countries.

The 2010–11 season in Primera División de Nicaragua will be divided into two tournaments and will determine the 57th and 58th champions in the history of the league. The season will begin on July 25 and end on December 12. It will also provide the sole berth for the 2011–12 CONCACAF Champions League.

The 2011–12 season in Primera División de Nicaragua will be divided into two tournaments and will determine the 59th and 60th champions in the history of the league. It will also provide the sole berth for the 2012–13 CONCACAF Champions League. The Apertura tournament will be played in the second half of 2011, while the Clausura will be played in the first half of 2012.

Denis Phipps is a professional baseball outfielder for the Sugar Land Skeeters of the Atlantic League of Professional Baseball. He played in Major League Baseball (MLB) for the Cincinnati Reds in 2012.

The Petroleros de Cabimas was a baseball club that played from 1991 through 1995 in the Venezuelan Professional Baseball League. The Petroleros joined the league as an expansion team in the Western Division and played its home games at Estadio Víctor Davalillo in Cabimas, a town on the shore of Maracaibo Lake in Zulia State.