Nichicon Corporation (ニチコン株式会社, Nichikon Kabushiki-gaisha) is a manufacturer of capacitors of various types and applications and is one of the largest manufacturers of capacitors in the world, headquartered in Karasuma Oike, Nakagyō-ku, Kyoto, Japan. In 1950, it separated from the Nii Works Co., established itself as Kansai-Nii Works and finished its first factory by 1956. In 1961, it adopted the Nichicon name and have been using it, or a variant thereof, ever since.

In 2011 and 2012 Nichicon spun off several major factories into independent subsidiaries and established representative branches in foreign countries, thus realigning its corporate infrastructure. [3]

From 2001 to 2004, Nichicon produced defective capacitors (series HM and HN) that ended up being used by major computer manufacturers, including Dell, Hewlett-Packard, and Apple. [4] [5] No overall reason was ever proven for the production runs of defective capacitors, but some sources claimed that these capacitors were either overfilled with electrolyte, [4] or were constructed using electrolyte fluid that was prone to pop and leak fluid, causing premature failure in any equipment using them. This issue was not related to the contemporaneous Taiwanese "Capacitor Plague". [4]

In 2010 Dell settled a civil lawsuit for its shipment of at least 11.8 million computers from May 2003 to July 2005 that used faulty Nichicon components and were prone to major failure. [6] [7] 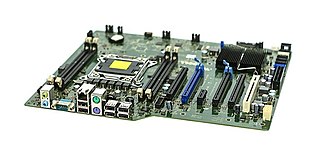 Dell is an American multinational computer technology company that develops, sells, repairs, and supports computers and related products and services. Named after its founder, Michael Dell, the company is one of the largest technological corporations in the world, employing more than 165,000 people in the U.S. and around the world. It is one of the biggest PC manufacturing companies in the world.

Seagate Technology PLC is an American data storage company. It was incorporated in 1978 as Shugart Technology and commenced business in 1979. Since 2010, the company is incorporated in Dublin, Ireland, with operational headquarters in Cupertino, California, United States. David Mosley is the current CEO with Stephen J. Luczo as chairman of the board of directors. In January 2009, Luczo, Seagate's chairman, was appointed president and chief executive officer, returning him to the role he held at Seagate from 1998 to 2004. On October 2, 2017 COO David Mosley was appointed CEO and Luczo stepped down from that role.

Universal Abit was a computer components manufacturer, based in Taiwan, active since the 1980s. Its core product line were motherboards aimed at the overclocker market. Abit experienced serious financial problems in 2005. The brand name "ABIT" and other intangible properties, including patents and trademarks, were acquired by Universal Scientific Industrial Co., Ltd. (USI) in May 2006.

The capacitor plague was a problem related to a higher-than-expected failure rate of non-solid aluminium electrolytic capacitors, between 1999 and 2007, especially those from some Taiwanese manufacturers, due to faulty electrolyte composition that caused corrosion accompanied by gas generation, often rupturing the case of the capacitor from the build-up of pressure.

Rubycon Corporation is a Japanese electronics company, whose main products are electrolytic capacitors (AECs), film capacitors and power supply units with a wide range of applications including consumer, industrial, power, lighting and automotive.

OptiPlex is a line of business-oriented desktop computers from Dell Technologies aimed at corporate enterprises, healthcare, government, and education markets. The systems typically contain Intel CPUs, beginning with Celeron and Pentium and currently with the Core microarchitecture. Business-oriented components, such as Gigabit Ethernet, DisplayPort, Tool-less Chassis and software such as data protection utilities, along with management features such as Intel vPro often come standard with OptiPlex systems. OptiPlex configurations can be completed by the purchaser for components such as CPU, GPU, RAM, Storage and Wireless options, as well as Dell Pro support. A professional edition of Microsoft Windows comes preinstalled and Linux Dell n Series options are also available. 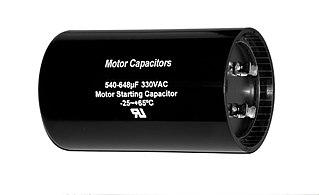 A motor capacitor, such as a start capacitor or run capacitor is an electrical capacitor that alters the current to one or more windings of a single-phase alternating-current induction motor to create a rotating magnetic field. 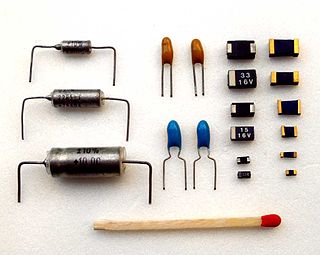 AVX Corporation, is an American manufacturer of electronic components headquartered in Fountain Inn, South Carolina. It is the largest industrial employer in Horry County, South Carolina, with almost 1000 workers in Myrtle Beach and Conway. AVX has 9,900 employees and operates in the United States, Europe and Asia. AVX is a subsidiary of Kyocera Electronics Corporation.

Takata Corporation was a Japanese automotive parts company. The company had production facilities on four continents, with its European headquarters located in Germany, where it also had nine production facilities. In 2013, a series of deaths and injuries associated with defective Takata airbag inflators manufactured by their Mexican subsidiary Tacata Airbags led Takata to initially recall 3.6 million cars equipped with such airbags. Further fatalities caused by the airbags have led the National Highway Traffic Safety Administration (NHTSA) to order an ongoing, US-wide recall of more than 42 million cars, the largest automotive recall in U.S. history. In June 2017, Takata filed for bankruptcy. It was acquired by Key Safety Systems.

This page contains an overview of the history of Dell. 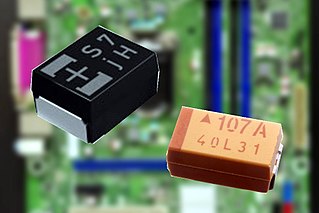 On February 6, 2014, General Motors (GM) recalled about 800,000 of its small cars due to faulty ignition switches, which could shut off the engine while the vehicle was in motion and thereby prevent the airbags from inflating. The company continued to recall more of its cars over the next several months, resulting in nearly 30 million cars recalled worldwide and paid compensation for 124 deaths. The fault had been known to GM for at least a decade prior to the recall being declared. As part of a Deferred Prosecution Agreement, GM agreed to forfeit $900 million to the United States.

A niobium electrolytic capacitor is a polarized capacitor whose anode electrode (+) is made of passivated niobium metal or niobium monoxide on which an insulating niobium pentoxide layer acts as the dielectric of the niobium capacitor. A solid electrolyte on the surface of the oxide layer serves as the second electrode (cathode) (-) of the capacitor.