He was born in Great Yarmouth, and educated at Pembroke Hall, Cambridge. [2] He was rector of St Mary-le-Bow church in London, from 1597 to 1617; and also rector at St Antholin, Budge Row. [3] St Antholin's was on Watling Street, and it has been suggested that the 1606 play The Puritan, or the Widow of Watling Street alludes to Felton through the name Nicholas St Antlings of one of the Widow's serving men. [4]

He was Master at Pembroke, where he became a Fellow in 1583, from 1616 to 1619. [5] In university politics he conspicuously supported Thomas Howard, Earl of Berkshire, against George Villiers, Duke of Buckingham, in an election for the position of Chancellor of the University of Cambridge, in 1626. King Charles I of England supported Buckingham, and this contest became a test of strength of the religious groups, Puritan and Anglican. [6] He employed as chaplain Edmund Calamy, who had studied at Pembroke, already dissenting from orthodox Anglican belief. [7]

George Villiers, 1st Duke of Buckingham, KG(; 28 August 1592 – 23 August 1628), was an English courtier, statesman, and patron of the arts. He was a favourite and possibly also a lover of King James I of England. Buckingham remained at the height of royal favour for the first three years of the reign of James's son, King Charles I, until a disgruntled army officer assassinated him. 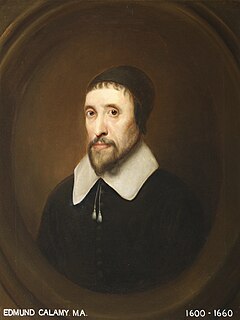 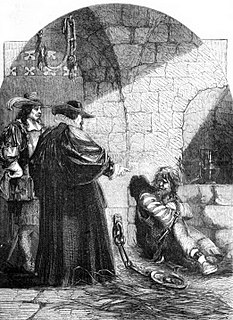 John Felton was a lieutenant in the English Army who stabbed George Villiers, 1st Duke of Buckingham to death in the Greyhound Pub of Portsmouth on 23 August 1628. 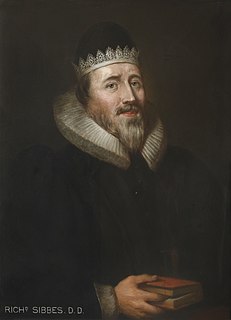 Richard Sibbes (1577–1635) was an Anglican theologian. He is known as a Biblical exegete, and as a representative, with William Perkins and John Preston, of what has been called "main-line" Puritanism because he always remained in the Church of England and worshiped according to the Book of Common Prayer.

Philip Herbert, 4th Earl of Pembroke and 1st Earl of Montgomery, was an English courtier, nobleman, and politician active during the reigns of James I and Charles I. Philip and his older brother William were the 'incomparable pair of brethren' to whom the First Folio of Shakespeare's collected works was dedicated in 1623.

Richard Stock was an English clergyman and one of the Puritan founders of the Feoffees for Impropriations. He was minister at All Hallows, Bread Street in London, from 1611 to 1626.

Martin Fotherby was an English clergyman, who became Bishop of Salisbury.

Thomas Beard was an English clergyman and theologian, of Puritan views. He is known as the author of The Theatre of Gods Judgements, and the schoolmaster of Oliver Cromwell at Huntingdon.

John Hall (1633–1710) was an English churchman and academic, Master of Pembroke College, Oxford, and Bishop of Bristol. He was known as the last of the English bishops to hold to traditional Puritan views.

Thomas Tymme was an English clergyman, translator and author. He combined Puritan views, including the need for capital punishment for adultery, with a positive outlook on alchemy and experimental science.