General John Nicholas Reynolds Houghton, Baron Houghton of Richmond, GCB , CBE , DL (born 18 October 1954) is a retired senior British Army officer and former Chief of the Defence Staff (CDS) of the British Armed Forces. He was appointed CDS in July 2013, following the retirement of General Sir David Richards. He served as Commanding Officer of the 1st Battalion, the Green Howards in Northern Ireland during The Troubles and later became Commander of the 39th Infantry Brigade in Northern Ireland. He deployed as Senior British Military Representative and Deputy Commanding General, Multi-National Force – Iraq during the Iraq War. Later, he became Chief of Joint Operations at Permanent Joint Headquarters and served as Vice-Chief of the Defence Staff until assuming the position of CDS. Houghton retired from the British Army in July 2016, and was succeeded as CDS by Air Chief Marshal Sir Stuart Peach.

Houghton was born on 18 October 1954 in Otley near Leeds and is the son of Frank and Margaret Houghton. [1] He was educated at Woodhouse Grove School, an independent school near Bradford. [2] In 1977, he graduated from St Peter's College, Oxford, having taken an in-Service Bachelor of Arts degree in Modern History. [3] [4]

After attending Royal Military Academy Sandhurst, Houghton was commissioned into the Green Howards as a second lieutenant on 9 March 1974. [5] He was promoted to lieutenant on 9 March 1976, [6] to captain on 9 September 1980 [7] and to major on 30 September 1986. [8] He was appointed Military Assistant to the Chief of Staff British Army of the Rhine and subsequently became a member of the Directing Staff at the Royal Military College of Science, Shrivenham. [9] Promoted to lieutenant colonel on 30 June 1991, [10] he became Commanding Officer of 1st Battalion The Green Howards in 1991 [4] and was deployed to Northern Ireland in 1993. [11]

Houghton was made Deputy Assistant Chief of Staff at HQ Land Command in 1994 and he attended the Higher Command and Staff Course in 1997. [4] Promoted to brigadier on 31 December 1997 with seniority from 30 June 1997, [12] he became Commander of 39 Infantry Brigade in Northern Ireland in 1997 and was Director of Military Operations at the Ministry of Defence from December 1999 to July 2002. [4] He was promoted to major general on 26 July 2002 [13] and was made Chief of Staff of the Allied Rapid Reaction Corps that year [1] before becoming Assistant Chief of the Defence Staff (Operations) in 2004. [4]

Promoted to lieutenant general on 14 October 2005, [14] Houghton was deployed as Senior British Military Representative and Deputy Commanding General, Multi-National Force – Iraq in October 2005. [4] He became Chief of Joint Operations at Permanent Joint Headquarters (UK) in 2006 [4] and, after being relieved of that post on 13 March 2009, [4] he was promoted to general and appointed Vice-Chief of the Defence Staff on 5 May 2009. [15]

Houghton took over as Chief of the Defence Staff on 18 July 2013. [16] He stated that one of his key objectives was to re-shape the Armed forces in the post-Afghanistan era. [17] Houghton also raised concerns about the Armed Forces' abilities with the personnel and budget cuts. [18] As of 2015, Houghton was paid a salary of between £255,000 and £259,999 by the department, making him one of the 328 most highly paid people in the British public sector at that time. [19]

In 2016, he was appointed Constable of the Tower of London, as the monarch's representative for five years, replacing Richard Dannatt, Baron Dannatt. [22] This is primarily a ceremonial post but the Constable is also a trustee of Historic Royal Palaces and the Royal Armouries. [23] [24]

In October 2017, it was announced that a life peerage would be conferred on Houghton. [40] [41] On 20 November, he was created Baron Houghton of Richmond, of Richmond in the County of North Yorkshire. [42]

In 1982 Houghton married Margaret Glover: they have one son and one daughter. [1] His interests include golf, sailing, shooting, cooking and history. [4]

General Sir Michael David Jackson, is a retired British Army officer and one of its most high-profile generals since the Second World War. Originally commissioned into the Intelligence Corps in 1963, he transferred to the Parachute Regiment in 1970, with which he served two of his three tours of duty in Northern Ireland. On his first, he was present as an adjutant at the events of the Ballymurphy massacre (1971), where 11 unarmed civilians were shot dead by British troops, and then at Bloody Sunday (1972), when British soldiers opened fire on protesters, killing 14. On his second, he was a company commander in the aftermath of the Warrenpoint ambush (1979), the British Army's heaviest single loss of life during the Troubles. He was assigned to a staff post at the Ministry of Defence (MoD) in 1982 before assuming command of the 1st Battalion, Parachute Regiment, in 1984. Jackson was posted to Northern Ireland for the third time, as a brigade commander, in the early 1990s. 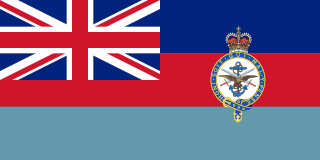 Chief of the General Staff (CGS) has been the title of the professional head of the British Army since 1964. The CGS is a member of both the Chiefs of Staff Committee and the Army Board. Prior to 1964 the title was Chief of the Imperial General Staff (CIGS). Since 1959, the post has been immediately subordinate to the Chief of the Defence Staff, the post held by the professional head of the British Armed Forces. 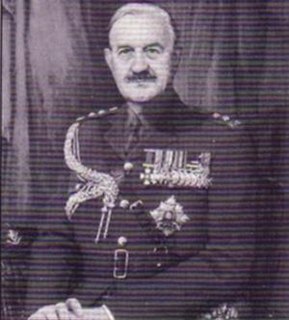 General Sir Peter Mervyn Hunt, was Chief of the General Staff, the professional head of the British Army, from 1973 to 1976. He served in the Second World War and commanded British Forces deployed in response to the Indonesia–Malaysia confrontation. Later in his career he provided advice to the British Government at a time of continuing tension associated with the Troubles in Northern Ireland.

Field Marshal Sir Nigel Thomas Bagnall, was Chief of the General Staff, the professional head of the British Army from 1985 to 1988. Early in his military career he saw action during the Palestine Emergency, the Malayan Emergency, the Cyprus Emergency and the Indonesia–Malaysia confrontation, and later in his career he provided advice to the British Government on the future role of Britain's nuclear weapons.

Field Marshal Peter Anthony Inge, Baron Inge,, was the Chief of the General Staff, the professional head of the British Army, from 1992 to 1994. He then served as Chief of the Defence Staff before retiring in 1997. Early in his military career he saw action during the Malayan Emergency and in Northern Ireland and later in his career he provided advice to the British Government during the Bosnian War.

General Sir Roger Neil Wheeler, is a retired British Army officer who served as Chief of the General Staff from 1997 to 2000. During his career he was involved in the Cyprus Emergency, directed military operations in Northern Ireland and led the UK's forces deployed on NATO operations in Bosnia. He is now a non-executive director of several businesses operating on an international basis.

Field Marshal Sir John Wilfred Stanier, was a senior British Army officer who was Chief of the General Staff from 1982 to 1985. He was the first person after the Second World War to become the professional head of the British Army without having seen active service in that war or any subsequent campaign. 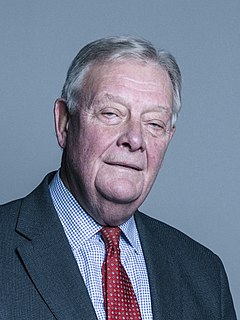 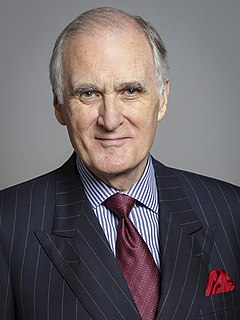 Marshal of the Royal Air Force Graham Eric Stirrup, Baron Stirrup,, informally known as Jock Stirrup, is a former senior Royal Air Force commander who was the Chief of the Defence Staff from 2006 until his retirement in late 2010. He is now a Crossbench member of the House of Lords. In April 2013, he was appointed a Knight of the Order of the Garter by Queen Elizabeth II. 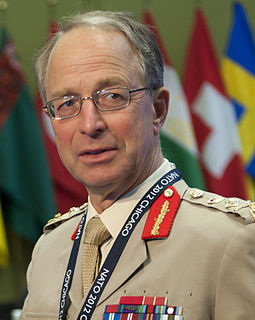 General David Julian Richards, Baron Richards of Herstmonceux, is a retired senior British Army officer who was formerly the Chief of the Defence Staff, the professional head of the British Armed Forces. He succeeded Air Chief Marshal Sir Jock Stirrup in this role on 29 October 2010. 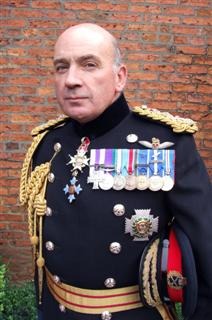 General Francis Richard Dannatt, Baron Dannatt, is a retired senior British Army officer and member of the House of Lords. He was Chief of the General Staff from 2006 to 2009.

General Sir Gordon Kenneth Messenger, is a retired senior Royal Marines officer who served as Vice-Chief of the Defence Staff from May 2016 to May 2019. As a colonel he commanded 40 Commando during the Iraq War, and led the Commando in the assault on the Al-Faw Peninsula. He served as British Commander of Task Force Helmand, during the 3 Commando Brigade deployment to Helmand Province, Afghanistan on Operation Herrick IX from 2008 to 2009.

Admiral Sir George Michael Zambellas, is a retired Royal Navy officer. He was the First Sea Lord and Chief of the Naval Staff from April 2013 until he handed over duties to Admiral Sir Philip Jones in April 2016.

Air Chief Marshal Sir Stuart William Peach, is a senior Royal Air Force officer. After training as a navigator, Peach commanded IX (Bomber) Squadron and then became Deputy Station Commander RAF Bruggen. He was deployed as NATO Air Commander (Forward) in Kosovo in 2000. He went on to be Chief of Defence Intelligence in 2006, Chief of Joint Operations in 2009 and the first Commander of Joint Forces Command in December 2011 before being appointed Vice-Chief of the Defence Staff in May 2013. Peach succeeded General Sir Nick Houghton as Chief of the Defence Staff on 14 July 2016. He succeeded General Petr Pavel as Chairman of the NATO Military Committee on 29 June 2018. 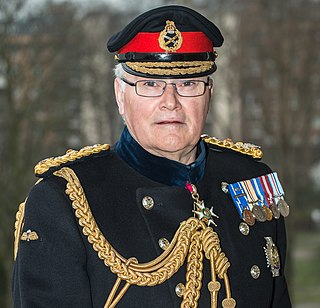 Air Chief Marshal Sir Andrew Douglas Pulford, is a retired senior Royal Air Force (RAF) commander. A helicopter pilot with operational service in Northern Ireland, the Falklands War and Iraq War, Pulford commanded RAF Odiham and No. 2 Group, and served as Assistant Chief of Defence Staff Operations, before taking up the post of Deputy Commander-in-Chief Personnel at Air Command and Air Member for Personnel in 2010. He became Chief of the Air Staff on 31 July 2013, retiring from the Royal Air Force on 12 July 2016.

General Sir Geoffrey Richard Desmond Fitzpatrick, was a senior British Army officer who served as commander of the British Army of the Rhine and Deputy Supreme Allied Commander Europe. After his retirement from the army he was appointed Lieutenant Governor of Jersey and later held a ceremonial position in the Royal Household.

General Sir Nicholas Patrick Carter, is a Kenyan-born senior British Army officer. He served as commanding officer of 2nd Battalion, Royal Green Jackets in which role he was deployed to Bosnia in 1998 and Kosovo in 1999. After service in Afghanistan, he took command of 20th Armoured Brigade in 2004 and commanded British forces in Basra. He was subsequently appointed General Officer Commanding 6th Division, which was deployed to Afghanistan with Carter as Commander ISAF Regional Command South, before he became Director-General Land Warfare. After that he became Deputy Commander Land Forces in which role he was the main architect of the Army 2020 concept. Following a tour as Deputy Commander, International Security Assistance Force, he assumed the position of Commander Land Forces in November 2013. In September 2014, he became head of the British Army as Chief of the General Staff succeeding General Sir Peter Wall. In June 2018 he succeeded Air Chief Marshal Sir Stuart Peach as Chief of the Defence Staff.