Nicolaas Hartsoeker (26 March 1656, in Gouda – 10 December 1725, in Utrecht) was a Dutch mathematician and physicist who invented the screw-barrel simple microscope [1] circa 1694.

He was the son of Anna van der Meij and Christiaan Hartsoeker (1626–1683), a Remonstrant minister in Moordrecht near Gouda. His father took the family to Alkmaar in 1661 and finally to Rotterdam in 1669. Nicolaas started to make a living as a lens maker in Rotterdam, and was instructed in optics by Antonie van Leeuwenhoek. In 1674, he and a fellow student, assisted by Van Leeuwenhoek, were the first to observe semen, a situation that would later lead to a priority dispute between Hartsoeker and Leeuwenhoek over the discovery of spermatozoids.

In 1677, Hartsoeker met Christiaan Huygens and initiated him in the making of lenses. In June 1678, Hartsoeker accompanied, in the role of an assistant, Huygens on a trip to Paris, where they made a great impression with their microscopes. However, Huygens failed to mention Hartsoeker even once in a subsequent publication in France, leading to a fall-out between the two. [2]

Hartsoeker returned to Rotterdam, where his parents still lived and where he married Elisabeth Vettekeucken in October 1680. His business as an instrument maker and wine merchant failed and, after the death of his father in August 1683, he moved his family in 1684 to Paris, where he made instruments for the Paris observatory and the academy. Hartsoeker also came up with contrivances for aiming very large aerial telescopes originally popularized by Huygens. [3] He remained there until 1698. [2]

It is often said that in 1694, while observing human sperm through a microscope, Hartsoeker believed that he saw tiny men inside the sperm, which he called homunculi or animalcules. However, he only postulated their existence as part of his Spermist theory of conception and never claimed to have seen them. [4] The 1694 "Essay on dioptrics", in which this hypothesis appears[ citation needed ], was a highly lauded book, in fact tackling several misconceptions of the time. For example, Hartsoeker disavows the contemporary position (e.g. of Robert Hooke) that with refractor telescopes one soon would be able to see man-sized creatures on the moon, if any in fact existed. [2]

At the end of the century, Hartsoeker had become quite famous. In 1699 he was elected member of the French Academy of Sciences and in 1704 of the Prussian Academy of Sciences, in both cases as one of the first foreign members. Czar Peter met him in Amsterdam and offered him the chair of mathematics in St Petersburg. Hartsoeker did not accept, but the czar did finance an observatory for him in Amsterdam. Later, in 1704, Hartsoeker accepted the offer of Johann Wilhelm, Elector Palatine to become "first mathematician and honorary professor of philosophy" at the University of Heidelberg. The last years of his life were spent in Utrecht. [2]

Antonie Philips van Leeuwenhoek was a Dutch businessman and scientist in the Golden Age of Dutch science and technology. A largely self-taught man in science, he is commonly known as "the Father of Microbiology", and one of the first microscopists and microbiologists. Van Leeuwenhoek is best known for his pioneering work in microscopy and for his contributions toward the establishment of microbiology as a scientific discipline.

Christiaan Huygens, also spelled Huyghens, was a Dutch physicist, mathematician, astronomer and inventor, who is widely regarded as one of the greatest scientists of all time and a major figure in the scientific revolution. In physics, Huygens made groundbreaking contributions in optics and mechanics, while as an astronomer he is chiefly known for his studies of the rings of Saturn and the discovery of its moon Titan. As an inventor, he improved the design of the telescope with the invention of the Huygenian eyepiece. His most famous invention, however, was the pendulum clock in 1656, which was a breakthrough in timekeeping and became the most accurate timekeeper for almost 300 years. Because he was the first to use mathematical formulae to describe the laws of physics, Huygens has been called the first theoretical physicist and the founder of mathematical physics.

JohannesHudde was a burgomaster (mayor) of Amsterdam between 1672 – 1703, a mathematician and governor of the Dutch East India Company.

Theodorus Janssonius van Almeloveen was a Dutch physician, and the learned editor of various classical and medical works. He was born at Mijdrecht, near Utrecht, where his father was minister of the reformed church. His mother, Mary Jansson, was related to the celebrated printer of Amsterdam, Jan Jansson. 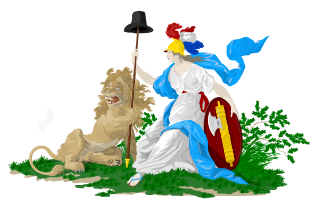 The Dutch Maiden is a national personification of the Netherlands. She is typically depicted wearing a Roman garment and with a lion, the Leo Belgicus, by her side. In addition to the symbol of a national maiden, there were also symbolic provincial maidens and town maidens.

Nicolaes Witsen was a Dutch statesman who was mayor of Amsterdam thirteen times, between 1682 and 1706. In 1693 he became administrator of the VOC. In 1689 he was extraordinary-ambassador to the English court, and became Fellow of the Royal Society. In his free time he was cartographer, maritime writer, and an authority on shipbuilding. His books on the subject are important sources on Dutch shipbuilding in the 17th century. Furthermore, he was an expert on Russian affairs. He was the first to describe Siberia, the Far East and Central Asia in his study Noord en Oost Tartarye [North and East Tartary].

In the history of biology, preformationism is a formerly-popular theory that organisms develop from miniature versions of themselves. Instead of assembly from parts, preformationists believed that the form of living things exist, in real terms, prior to their development. It suggests that all organisms were created at the same time, and that succeeding generations grow from homunculi, or animalcules, that have existed since the beginning of creation.

Joan Huydecoper van Maarsseveen II was the eldest son of burgomaster Joan Huydecoper van Maarsseveen I and the brother-in-law of the collector Jan J. Hinlopen and the sheriff Jacob Boreel. He was mayor of Amsterdam for 13 terms between 1673 and 1693. Unlike most mayors, he did not live at the Golden Bend, but on Lauriergracht in the Jordaan, where Govaert Flinck, Johannes Lingelbach, Jurriaen Ovens, who painted his portrait, the art-dealer Gerrit van Uylenburgh en Melchior de Hondecoeter also lived.

Constantijn Huygens Jr., Lord of Zuilichem was a Dutch statesman and poet, mostly known for his work on scientific instruments. But, he was also a chronicler of his times, revealing the importance of gossip. Besides he was an amateur draughtsman of landscapes.

Nicolas Andry de Bois-Regard was a French physician and writer. He played a significant role in the early history of both parasitology and orthopedics, the name for which is taken from Andry's book Orthopédie.

The Geographer is a painting created by Dutch artist Johannes Vermeer in 1668–1669, and is now in the collection of the Städelsches Kunstinstitut museum in Frankfurt, Germany. It is closely related to Vermeer's The Astronomer, for instance using the same model in the same dress, and has sometimes been considered a pendant painting to it. A 2017 study indicated that the canvas for the two works came from the same bolt of material. 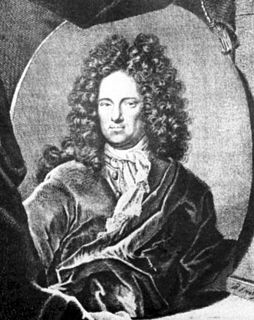 Ehrenfried Walther von Tschirnhaus was a German mathematician, physicist, physician, and philosopher. He introduced the Tschirnhaus transformation and is considered by some to have been the inventor of European porcelain, an invention long accredited to Johann Friedrich Böttger but others claim porcelain had been made by English manufacturers at an even earlier date.

Daniel de Superville, also known as Daniel de Superville père, was a Huguenot pastor and theologian who fled France for the Dutch Republic in 1685 and became the minister of the Walloon church in Rotterdam. He is known particularly for his published Sermons.