Nicole Fuchs [4] (néeBass; August 10, 1964 – February 17, 2017) was an American bodybuilder, actress, professional wrestler, and professional wrestling valet. She worked for companies such as Extreme Championship Wrestling, World Wrestling Federation and XPW. From 1993 until her death, she made numerous appearances on The Howard Stern Show and took part as a contestant in Stern's 1993 pay-per-view television event The Miss Howard Stern New Year's Eve Pageant . [5] She then became a member of the show's Wack Pack.

She made guest appearances on four soap operas: The Bold and the Beautiful and Days of Our Lives in 1991, and General Hospital and Guiding Light in 1992.

Bass was born in Middle Village in Queens, New York. [4]

Bass was a bodybuilder in the late 1980s and throughout the 1990s. She won the 1997 NPC National Bodybuilding Championship. [4]

Trained by Extreme Championship Wrestling (ECW), she started her professional wrestling career in Japan in August 1998 for NEO Women's Pro Wrestling she won a tournament defeating Kyoko Inoue. Bass debuted in Extreme Championship Wrestling (ECW) during the first half of 1998. She aligned herself with Justin Credible, Chastity and Jason. She participated in feuds with Tommy Dreamer, Mikey Whipwreck and Beulah McGillicutty.[ citation needed ]

Bass soon joined the World Wrestling Federation (WWF), debuting as Sable's villainous bodyguard at WrestleMania XV on March 28, 1999. [3] She became involved in an extended feud with Debra McMichael, which culminated in a mixed tag match pitting Bass and Val Venis against Jeff Jarrett and Debra at the 1999 WWF Over the Edge, which took place directly after the tragic death of Owen Hart at that pay-per-view. Bass was then aligned with Venis until she accidentally whacked him with Jarrett's guitar after losing a bikini contest to Debra. The following week, she interfered in a match between Debra and Ivory, with Debra losing her Women's Championship due to Nicole's interference.[ citation needed ]

This led to a brief alliance between Bass and Ivory, which ended abruptly when Bass left the WWF and filed a lawsuit against the organization for sexual harassment, claiming she was sexually assaulted backstage by Steve Lombardi. In 2003 the case went to court and was ultimately dismissed. [6] Bass continued to wrestle on the independent wrestling circuit and did bookings for public events and for personal training. [1] She wrestled her last match in 2002.

In September 2000, Bass spent a night in prison after biting a New York police officer who was trying to break up a fight that Bass was involved in. In June 2015, she was arrested for shoplifting in a Queens, NY, supermarket.

At the time of Bass' death, she was in a relationship with her business partner, Kristen Marrone. [8] [9]

On February 16, 2017, girlfriend Kristen Marrone posted a statement on Bass' official Facebook stating that Bass had been hospitalized after being found unconscious at her apartment. [10] Later that day, she was declared to be medically brain dead following a heart attack. Her family and friends were with her that evening as she was taken off life support. Bass died on February 17 at the age of 52. [11] 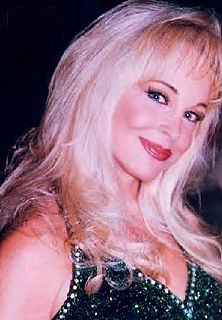 Debra Gale Marshall is an American actress, and retired professional wrestling valet. Well known by her ring name Debra, she is notable for her appearances with World Championship Wrestling (WCW) as Queen Debra between 1995 and 1998 and the World Wrestling Federation (WWF) as Debra between 1998 and 2002. She began her career in professional wrestling in 1995, accompanying her husband Steve "Mongo" McMichael to the ring in World Championship Wrestling (WCW).

Alicia Nicole Webb is a retired American professional wrestling valet. She is known for her time with the World Wrestling Federation (WWF) during 1999 as Ryan Shamrock. She is also known for appearing on the Independent circuit under her real name and in World Championship Wrestling as Symphony.

Ann-Marie Crooks is a Jamaican-born American former female bodybuilder and professional wrestler. She was previously working for World Championship Wrestling (WCW) in 1999 under the ring name Midnight.

Ondrea "Vickie" Victoria Gates is a professional female bodybuilder from the United States.

Achim Albrecht is a German personal trainer and former bodybuilder and professional wrestler. He is best known for winning the over 90 kilograms category of the International Federation of BodyBuilding & Fitness Mr. Universe contest in Malaysia in 1990. In 1996, Albrecht transitioned to professional wrestling, where he appeared with North American promotions such as the World Wrestling Federation (WWF), Extreme Championship Wrestling (ECW) and the United States Wrestling Association (USWA) under the ring name Brakkus until retiring due to injury in 1999.

Yolanda R. Hughes-Heying is an American professional female bodybuilder from the United States.

Tazzie Colomb is an American professional female bodybuilder and powerlifter. She is one of the longest-competing IFBB female professional bodybuilders of all time. She is one of the strongest female powerlifters in the world: she can lift 75 kg in each arm, and on a TV show easily lifted four girls at the same time. Her stats are as follows: Chest 128 cm; Waist 89 cm; Hips 107 cm; Size feet 43 ; Size T-shirt XXXL; Size clothing USA 50" 37" 43"; Size neck 44 cm; Size bicep 47 cm; Size forearm 38 cm; Size wrist 24 cm; Size dress USA 22; Max overhead lift 90 kg; Max dumbbell arm 75 kg.

Christine Envall is an Australian professional bodybuilder and nutritionist.

WWE has maintained several professional wrestling world championships since Capitol Wrestling Corporation seceded from the National Wrestling Alliance in 1963 to become the World Wide Wrestling Federation (WWWF), which was later subjected to various name changes, including World Wrestling Federation (WWF) and World Wrestling Entertainment (WWE)—in April 2011, the company ceased using its full name and has since just been referred to as WWE. Whenever the WWE brand extension has been implemented, separate world championships have been created or allocated for each brand.