Nidec Corporation (日本電産株式会社, Nihon Densan Kabushiki-gaisha) is a Japanese manufacturer and distributor of electric motors. Their products are found in hard-disk drives, electric appliances, automobiles and commercial and manufacturing equipment. The company has the largest global market share for the tiny spindle motors that power hard-disk drives. [2] [3]

The two product groups with the largest sales are hard-disk drive motors and automotive products with 16% and 22% of sales, respectively. [1]

As of 2017, the company has 296 subsidiaries companies located across Japan, Asia, Europe and the Americas. [4] Nidec is listed on the first section of the Tokyo Stock Exchange [5] and is a constituent of the TOPIX 100 stock market index.

The company was number 42 on the 2005 edition of the Businessweek Infotech 100 list. [6] Also Nidec was featured on the 2014 Forbes World's Most Innovative Companies list. [7]

Seagate Technology Holdings plc, an Irish public limited company is an American data storage company. It was incorporated in 1978 as Shugart Technology and commenced business in 1979. Since 2010, the company has been incorporated in Dublin, Ireland, with operational headquarters in Fremont, California, United States.

The Maytag Corporation is an American home and commercial appliance brand owned by Whirlpool Corporation after the April 2006 acquisition of Maytag.

Embraco is a manufacturer of compressors for refrigeration systems, founded in 1971 in Brazil. Embraco produces hermetic compressors, condensing units and sealed units, for domestic and commercial use.

The Whirlpool Corporation is an American multinational manufacturer and marketer of home appliances, headquartered in Benton Charter Township, Michigan, United States. The Fortune 500 company has annual revenue of approximately $21 billion, 92,000 employees, and more than 70 manufacturing and technology research centers around the world. Fewer than 10% of its employees are based in the United States.

Indesit Company is an Italian company based in Fabriano, Ancona. It is one of the leading European manufacturers and distributors of major domestic appliances. It claims to be the undisputed leader in major markets such as Italy, the UK and Russia. Founded in 1975 and listed on the Milan stock exchange since 1987, the group posted sales of €2.7 billion in 2013. It has eight industrial areas in Italy, Poland, the UK, Russia and Turkey, and 16,000 employees.

AGA Rangemaster Group Limited is a British manufacturer of range cookers, kitchen appliances, and interior furnishings, which was acquired by Middleby Corporation in September 2015 after it received a takeover approach from Whirlpool. The Group employs just over 2,500 people worldwide. 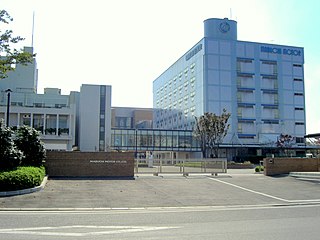 Mabuchi Motor Company is a Japanese manufacturing company based in Matsudo, Chiba Prefecture, Japan. It is the world's largest manufacturer by volume of small electric motors, producing over 1.4 billion motors annually. The company employs 24,286 people in its production division, 755 in its administrative division, 583 in its R&D division, and 219 in its sales division.

Tadiran refers to a former Israeli conglomerate, which was founded in 1962 by the merger of two companies, Tadir and Ran. The name of the company is a joining of both companies’ names.

Ansaldo was one of Italy's oldest and most important engineering companies, existing for 140 years from 1853 to 1993.

Bitzer SE is a manufacturer of refrigeration and air conditioning technology. In 2017, the company, which is headquartered in Sindelfingen, Germany, earned sales of €740 million. Bitzer SE has 64 locations and, as of 2017, had approximately 3,500 employees worldwide.

A. O. Smith Corporation is an American manufacturer of both residential and commercial water heaters and boilers and the largest manufacturer and marketer of water heaters in North America. It also supplies water treatment products in the Asian market. The company has 24 locations worldwide, including five manufacturing facilities in North America, as well as plants in Bengaluru in India, Nanjing in China and Veldhoven in The Netherlands.

Secop GmbH is a manufacturer of hermetic compressors for cooling circuits. Secop designs, develops, manufactures and distributes compressors for two application ranges: light commercial refrigeration systems and cooling solutions for the mobile area . According to the manufacturer, the compressors are characterized by low energy consumption, low noise emission and environmental friendliness due to the use of CFC-free refrigerants. 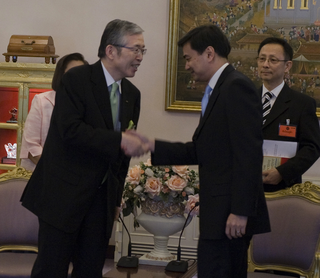 Shigenobu Nagamori is a Japanese billionaire businessman, and the chairman and CEO of Nidec, the world's largest manufacturer of micromotors for hard disks and optical drives.

Nidec Industrial Solutions is an Italian multinational company based in Milan, that designs and manufactures rotating electrical machines, Power electronics and industrial automation. It was founded in 2012 with the acquisition of Ansaldo Sistemi Industriali by Nidec Corporation. Working in electrical engineering, designs and manufactures of electric motors and generators, power electronics and control systems and automation for industrial applications, Nidec Industrial Solutions was founded in 2012 when Nidec, a Japanese multinational corporation listed on the TYO: 6594 and NYSE: NJ, NJ and ON TOPIX 100 Component and Nikkei, acquired Ansaldo Sistemi Industriali (ASI). ASI, an industrial branch of the Ansaldo Group, was privatized in 2000. Its markets include petrochemical, energy, steel, marine and industrial automation.