The Nidec Copal Corporation (日本電産コパル株式会社, Nihon Densan Koparu Kabushiki-gaisha), or Copal, is a Japanese manufacturer of optical, electronic and mechanical equipment, primarily for the photographic industry. It has been a subsidiary of Nidec Corporation since 1998, and was formerly known as the Copal Corporation. The company began operation in 1946, with small-scale production of photographic shutters; [1] these are still one of the company's best-known products.

In the 1960s the company began producing the well-known Copal Square vertically travelling metal blade focal plane shutter, which was very successful and was used in cameras by many prominent manufacturers.

In 2020 Nidec Copal has round about 6,450 employees [6] and manufactures devices, that are used in automobiles, optical products and Tablets beside shutters for digital cameras. [7] [8] 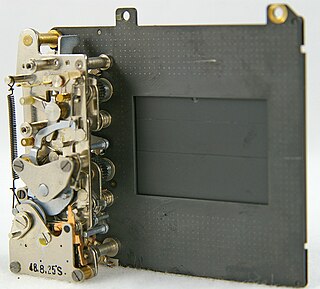 Konica was a Japanese manufacturer of, among other products, film, film cameras, camera accessories, photographic and photo-processing equipment, photocopiers, fax machines and laser printers. The company merged with Japanese peer Minolta in 2003, with the new company named Konica Minolta.

The Nikon FM is a mechanically operated, interchangeable lens, 35 mm film, single-lens reflex (SLR) camera. It was manufactured in Japan between 1977 and 1982 by Nippon Kogaku K. K.. 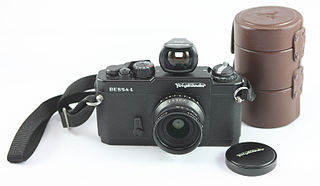 Nikkormat was a brand of cameras produced by the Japanese optics company Nippon Kogaku K. K., as a consumer version of the professional Nikon brand. Nikkormat cameras, produced from 1965 until 1978, were simpler and more affordable than Nikon-branded cameras, but accepted the same lenses as the Nikon F series cameras.

The Konica FT-1 was the last SLR to be built both under the Konica name and by Konica themselves. The FT-1 was introduced in 1983 as an improvement on the earlier FS-1.

The Nikkorex nameplate was used for a series of 35 mm film, single-lens reflex cameras sold by Japanese optical manufacturer Nippon Kogaku K.K., as well as a series movie cameras and movie projectors. The models, made by other companies, were designed and marketed as low-cost, feature-reduced equipment for the consumer market.

The Konica F was the first 35 mm SLR camera produced by Konishiroku, released in February 1960.

The Konica Hexar RF is a 35 mm rangefinder camera which was sold by Konica. It was introduced to the market on 13 October 1999. and subsequently discontinued some time before the end of 2003. The camera used the "Bayonet Konica KM-mount", a copy of the Leica M-mount, thus sharing interchangeable lenses with those designed for Leica cameras and others compatible with them. The Hexar RF has a combined rangefinder/viewfinder modeled on that of Leica cameras, a similar body shape and size - and so is similar to Leica M-mount cameras in many aspects of operation.

The Auto-Reflex and Autoreflex is a series of 35mm SLR cameras made by Konica from 1965 to 1988. All these models have the Konica AR bayonet.

The Konica AR camera lens mount was introduced in 1965 with the Konica Autoreflex, together with a range of lenses. It features a comparably short flange focal distance of 40.50 mm for a 35 mm film SLR camera. Its diameter is 47 mm. The focus of the Konica Hexanon lenses were from 21 mm to 1000 mm; at the start one zoom 47-100mm f3.5 Hexanon AR-H was offered. Konica produced cameras for Konica AR bayonet until 1988.

A lens board or lensboard is a photographic part used for securing a lens to the front standard of a large format view camera. The lens board itself is usually flat, square, and made of metal, wood, or plastic. The lens board will have a hole of various diameters drilled dead center on the board. A lens board typically varies between 1 and 4 millimeters in thickness. The overall size and shape of the lens board depends on the brand of camera and film format used. Some cameras will use 2 to 4 screws to secure the lens board to the front standard of the view camera, most commonly however, the lens board will be secured by one or more locking levers or tabs to allow tool-less removal of the lens board. The rear surface of a lens board is usually painted matte black to keep light entering the camera through the lens during exposure from reflecting off the surface and interfering with the projected image.

The Konica FP-1, introduced in 1981 and discontinued in 1983, was a 35mm SLR camera with TTL metering and a large range of exchangeable optics.

The Konica FC-1 was introduced in 1980 by Konica, one year after the FS-1, but does not have the integrated winder. It was manufactured until 1983. Both models were only available in a black finish. With top covers made from black plastic cast Konica had good experiences since the Autoreflex TC in the mid of the 70s.