Niepokalanów monastery (so called City of the Immaculate Mother of God) is a Roman Catholic religious community in Teresin (42 km to the west from Warsaw), Poland founded in 1927 by Friar Minor Conventual Friar Maximilian Kolbe, who was later canonized as a saint-martyr of the Catholic Church. [1]

Beginnings of the monastery

In 1927 Prince Jan Drucki-Lubecki offered Fr. Maximilian Kolbe a convenient ground near Warsaw for building a new monastery, later called Niepokalanów. In autumn of the same year the first wooden barracks were built and a consecration of the new monastery took place on 7 December 1927.

The facility served as a home for the Conventual brothers, a minor seminary and a volunteer fire department. It was also a centre for charitable ministry and evangelization through the radio programmes and the distribution of printed materials. In 1930 Father Kolbe founded a similar community in Nagasaki (Japan), called Mugenzai no Sono (無原罪の園:Garden of the Immaculate).

Quick growth of the Niepokalanów required more and more space, so the area of the monastery reached 28 ha. Before the Second World War broke out, it was the largest monastery in the world, housing as many as 760 men. One of the magazines, The Knight of the Immaculate, countered religious apathy and had a press run of 750,000 copies a month. The whole publishing house used about 1600 tonnes of paper annually for about 60 million copies of papers. [2]

The time of war

During the Second World War, the monastery provided shelter for many soldiers, injured in the September Campaign and also for refugees, regardless of their nationality or religion (e. g. to approximately 1,500 Jewish refugees from western Poland). [3] Father Maximilian Kolbe, together with four other Franciscans, was arrested by Gestapo and he died in Auschwitz concentration camp in 1941. In the end of the war (January 1945) during heavy bombardment of Niepokalanów, six friars were killed, some others injured and many of the buildings of the monastery were destroyed.

That time the media evangelisation was forbidden (with the only one exception - December 1940 issue of "Rycerz Niepokalanej", which aroused the hope of surviving dark time of war). So the Franciscans tried to keep up common prayers and help for the prisoners and numerous refugees.

There was a sawmill, carpentry and dairy, a repair shop for farm machinery, bicycles, watches and many other items. The friars grew their own food, they had livestock, bee hives and chickens. The courses of secret teaching were also held and PCK (Polish Red Cross) circle functioned.

After the war the printing house in Niepokalanów was reopened and The Knight of the Immaculate was issued again. In 1948-1954 there was built a new church, since April 1980 called basilica minor. [4] In June 1950, according to the decree of Cardinal Stefan Wyszynski, a new parish in Niepokalanów was established (6500 faithful circa). The church and the monastery were visited by Pope John Paul II during his second Pastoral Visit in Poland, on 18 of June 1983.

The visit of the Pope made Niepokalanów famous not only in Poland, but also abroad. The Pope called the monastery a heroic place where saint Maximilian lived and the environment of the Immaculate. Many pilgrims want to visit the place, sacred by activity of St Maximilian, and pray in the local basilica.

They also can see the Museum of St Maximilian (called There was a Man), established in 1998, and a wooden old chapel, one of the first buildings here, constructed in 1927 for the friars and rebuilt two years later so the local faithful could attend the celebrations and services. The monastery became also a place where many religious meeting are held. [5]

Maximilian Kolbe was a Polish Conventual Franciscan friar who volunteered to die in place of a stranger in the German death camp of Auschwitz, located in German-occupied Poland during World War II. He had been active in promoting the veneration of the Immaculate Virgin Mary, founding and supervising the monastery of Niepokalanów near Warsaw, operating an amateur-radio station (SP3RM), and founding or running several other organizations and publications. 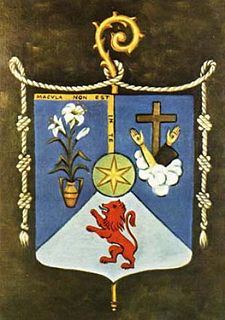 The Sacro Convento is a Franciscan friary in Assisi, Umbria, Italy. The friary is connected as part of three buildings to the upper and lower church of the Basilica of San Francesco d'Assisi, where the friars custody with great reverence the body of Saint Francis. St. Francis wanted to be buried at this location outside of Assisi's city walls, called Hill of Hell, because his master Jesus of Nazareth also was killed like a criminal outside of the city of Jerusalem. 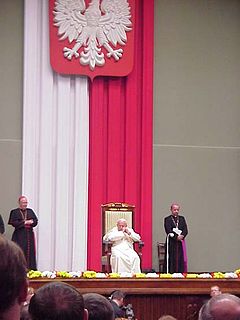 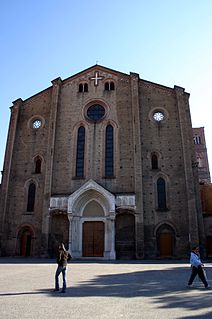 The Basilica of Saint Francis is a historic church in the city of Bologna in northern Italy. Founded in the 13th century, it has been the property of the Conventual Franciscan friars since then. The church has been raised to the rank of a basilica by the Holy See.

Franciszek Gajowniczek was a Polish army sergeant whose life was saved at Auschwitz by priest Maximilian Kolbe, who volunteered to die in his place. Gajowniczek had been sent to Auschwitz concentration camp from a Gestapo prison in Tarnów. He was captured while crossing the border into Slovakia after the defeat of the Modlin Fortress during the 1939 invasion of Poland by Nazi Germany. Gajowniczek and Kolbe met as inmates of Auschwitz in May 1941. 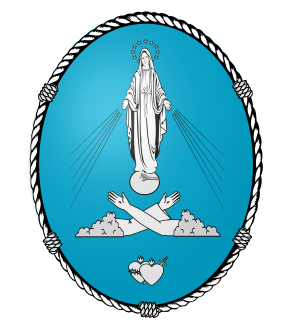 The church in Niepokalanów, devoted to the Blessed Virgin Mary the Immaculate, the Omni-mediatress of All Glories, was designed by the architect from Cracow - Zygmunt Gawlik. It was built between 1948-1954, in difficult times for Poland. In June 1950 it became a parish church for a new parish in Niepokalanów. 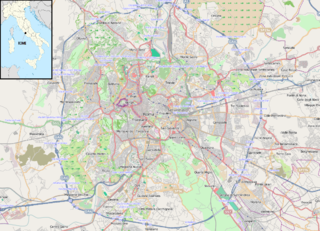 The Pontifical University of St. Bonaventure or Pontifical Theological Faculty of Saint Bonaventure, commonly called the Seraphicum, is the international study center of the Friars Minor Conventual in Rome. As a Pontifical faculty, the Seraphicum is governed by the Holy See according to the Apostolic Constitution Sapientia christiana.

Rycerz Niepokalanej is a Polish Roman-Catholic monthly magazine. It was first published in January 1922, and in Communist Poland its publication was banned from 1952 until 1981. Its founder and first editor-in-chief was Father Maximilian Kolbe, who remained in this post until March 1939.

Museum of St. Maximilian Kolbe "There was a Man" - is a museum, located in Niepokalanów monastery in Poland. Dedicated to the life and work of Father Maximilian Kolbe, evangelization activity of Niepokalanów, and the Franciscan missions throughout the world.

The Church of Saint Francis of Assisi is an important church of Palermo. It is located near the main street of the city, the ancient Cassaro, in the quarter of the Kalsa, within the historic centre of Palermo. The building represents the main Conventual Franciscan church of Sicily. It has the title of Minor basilica. 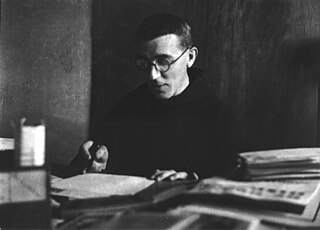 Nicolò Cortese - in religious Placido - was an Italian Roman Catholic priest and professed member from the Order of Friars Minor Conventual. He served as both a parish priest and as the director for the "Il Messaggero di Sant'Antonio" magazine in Padua before and during World War II. It was in that conflict that he set up an elaborate network designed to protect Jewish people as well as British prisoners of war and Yugoslavs. But the Nazis soon discovered his plans and organized his arrest in October 1944 before killing him some weeks later after brutal tortures in their interrogations.