Nikasala Aranya Senasanaya or Nikasala Forest Hermitage (Sinhalaː නිකසල ආරණ්‍ය සේනාසනය) is an ancient Cave temple in Panduwasnuwara DS, Sri Lanka. The temple is situated at Dematawakanda in Kanduboda-Moragane Village, about 5 km (3.1 mi) far from the ancient kingdom of Panduwasnuwara. The monastery has been formally recognised by the Government as an archaeological site in Sri Lanka. The designation was declared on 6 July 2007 under the government Gazette number 1505. [1]

Ketheeswaram temple is an ancient Hindu temple in Mannar, Northern Province Sri Lanka. Overlooking the ancient period Tamil port towns of Manthai and Kudiramalai, the temple has lay in ruins, been restored, renovated and enlarged by various royals and devotees throughout its history. Tirukkētīsvaram is one of the Pancha Ishwarams dedicated to the Hindu deity Shiva and is venerated by Shaivas throughout the continent. Throughout its history, the temple has been administered and frequented by Sri Lankan Hindu Tamils. Its famous tank, the Palavi tank, is of ancient antiquity and was restored from the ruins. Tirukkētīsvaram is one of the 275 Paadal Petra Sthalams of Shiva glorified in the poems of the Tevaram.

Kuliyapitiya is the second largest town in Kurunegala District, North Western Province, Sri Lanka, governed by an Urban Council. It is located 82 kilometres (51 mi) north-east of Colombo. Kuliyapitiya is home to the Wayamba University of Sri Lanka. Coconut and paddy cultivation are the main economic activities in this area. The town centre includes commerce and retail enterprises. 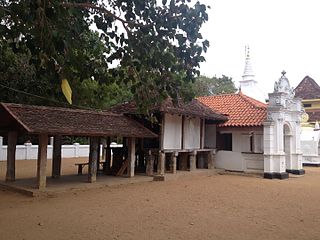 Panduwasnuwara Raja Maha Vihara is an ancient Buddhist temple situated in Panduwasnuwara, Kurunegala District, Sri Lanka. The temple has been formally recognised by the Government as an archaeological site in Sri Lanka. The designation was declared on 13 March 1970 under the government Gazette number 14897.

Tomb of Vijaya is an ancient monument, situated on the hillock of Medagama Kanda, Panduwasnuwara DS in Sri Lanka. The monument site consists of a stupa shaped circular structure which is traditionally believed to be the tomb of King Vijaya, the first recorded ruler of Sri Lanka. The hillock of Medagama Kanda lies about 6 km (3.7 mi) south-east of the ancient kingdom, Panduwasnuwara and is surrounded by another two historic temples, Nikasala Aranya Senasanaya and Kande Medagama Raja Maha Vihara. In 2007 the monument was formally recognised by the Government as a protected archaeological site in Sri Lanka.