Chow was born and raised in Hong Kong. She is fluent in Mandarin. However, netizens have pointed that her Cantonese pronunciation is less than perfect. This is because she grew up speaking Shanghainese in her family. She is the younger sister of the Hong Kong model Kathy Chow. Niki's school life ended when she was spotted by an agent who offered her a modeling opportunity. This was the beginning of her life as an artist. She was just about 17 years old at that time.

Several years later, she began her acting career in movies and television series, working mostly with TVB. Cast by Amy Wong, her first TVB series was Hard Fate . She is well known for her role and performance in Producer Lau Ka Ho's 2005 series The Gentle Crackdown , which stars Moses Chan and her. She won the Most Improved Actress award at the TVB Anniversary Awards (2005) for her performance in The Gentle Crackdown . Amy Wong's Under the Canopy of Love , starring Kevin Cheng, Bosco Wong and her, in the February of the following year also helped establish her popularity. An indirect sequel with the same cast and crew, The Seventh Day , came out February 2008. Her on-screen partnership with Kevin Cheng was well received by the audience in the years 2004–2008, along with rumours of the two dating in real life (until 2008). Her other series include The King of Snooker in 2009, with Adam Cheng and Patrick Tang. She filmed Sakura Memories (櫻紅醉), a travel documentary programme on Japan, in the spring of 2009 which aired on TVB in August 2009.

Stephanie Cheng is a female cantopop singer in Hong Kong She debuted under Go East Entertainment with the song "Grown Up" in 2003 and has since released more than six albums and EPs. She is best known for her song "Traffic Light" 紅綠燈 released in 2006; the song topped all four major radio stations in Hong Kong and garnered many year-end chart awards.

Kwan Wai-Man, better known professionally as Jade Kwan Sum-Yin, is a Cantopop singer and philanthropist based in Hong Kong. Originally from Vancouver, she entered the music industry after winning the 1999 New Talent Singing Awards Canada Finals and the Best Potential Newcomer Award at the New Talent Singing Awards International Finals of the same year. She debuted under BMA Records in July 2002 with the album Jade-1, winning multiple best new artist awards and has since released more than 13 albums and extended plays. Kwan is known for her philanthropic work and has been awarded the 2012 Ten Outstanding Young Persons Selection and the Hong Kong Volunteer Award in 2011. She is the founder and chairperson of charitable organization Shining Life Limited 妍亮生命慈善基金.

Feel 100% is a popular Hong Kong comic book series written by Lau Wan Kit (劉雲傑) and Yau Ching Yuen (游清源). Its popularity has resulted in various adaptations on film and television. To this date there are 4 movies and 1 TV series.

The Gentle Crackdown is a TVB costume comedy series broadcast in May 2005.

New Talent Singing Awards Vancouver Audition or NTSA Vancouver for short, is an annual singing contest organized by Fairchild Television in Vancouver, held every July. The winner of the contest will represent the city of Vancouver in the NTSA International Finals, usually held in Hong Kong, organized by TVB. 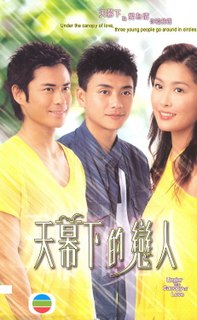 Under The Canopy of Love is a TVB modern drama series broadcast in February 2006. 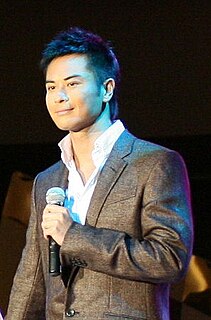 Kevin Cheng Ka-wing is a Hong Kong American actor and singer who is currently under the management of the Hong Kong television network TVB. Cheng rose to fame in late 2004 after playing his first lead role in the TVB drama Hard Fate. 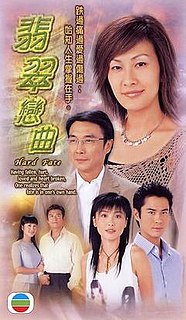 Amy Wong is a Hong Kong television drama producer. She worked for RTV and ATV before moving to TVB in 1989. Wong is known for her collaborations with Kevin Cheng and Ruco Chan, in which her productions have boosted both actors to stardom.

The King of Snooker is a TVB television drama miniseries revolving around the sport of snooker in Hong Kong. It was originally broadcast by the network in 2009, from 30 March through 24 April, and subsequently re-released on DVD in several translations. 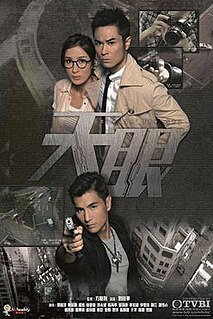 Eye in the Sky is a 2015 Hong Kong crime thriller television drama created and produced by TVB. The drama focuses on the relationship between two brothers, portrayed by Kevin Cheng and Ruco Chan, and deals with themes of comeuppance and destiny. In the series, the two brothers often use video surveillance cameras to catch criminals; these cameras are also commonly referred to as "heaven's eye" in Cantonese speech. 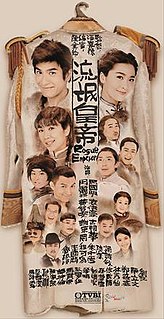 Rogue Emperor is a 2016 Hong Kong pre-modern romantic-comedy television drama created and produced by TVB, starring Kenneth Ma, Niki Chow, Mandy Wong, Benjamin Yuen, Koo Ming Wah and Brian Tse as the main cast. Filming took place from April till June 2014. The drama was originally scheduled to broadcast after "Master of Destiny" on Hong Kong's TVB Jade and HD Jade channels on August 3, 2015 every Monday through Friday during its 8:30-9:30 pm timeslot with a total of 20 episodes. On July 8, 2015 the drama was shelved again with no scheduled date of when it will be broadcast. In November 2016, it was announced that the drama will finally have an air date of 12 December 2016, with the number of episodes decreasing to 17.

Tsui Ka Ho, born 30 September 1980, more known by his pen name Lam Yat-hei or Roy Tsui, is a Hong Kong lyricist, who has written over 80 pieces of lyrics since 2007. He is also a writer and the founder of Blackpaper Limited. Blackpaper Limited is a local publisher which engages in multimedia creation and advertising campaigns. Multiple business and media channels owned by Tsui under Blackpaper Limited including Whitepaper Publishing, periodical magazine Blackpaper, satirical weekly magazine 100 Most and multimedia platform TV most.

Another Era is a 2018 drama produced by TVB, iQiyi, CCTV and CRTP. It is the sequel to At the Threshold of an Era starring Roger Kwok, Niki Chow, Frankie Lam, Tavia Yeung, Linda Chung, Benjamin Yuen, Pakho Chau, Gloria Tang, Roxanne Tong and Pat Poon.