Vekšin graduated from the Karl May School and the Imperator's Petersburg Institute of Technology. He began sailing in 1911 in the Imperial St. Petersburg Yacht Club. [1]

In the 1912 Summer Olympics he was a reserve sailor of the Russian team.

During the Russian Civil War, Vekšin served as an officer in the White Army.

In 1928 he was the captain of the Estonian boat Tutti V which won the bronze medal in the 6 metre class. The crew also included (William von Wirén, Georg Faehlmann, Andreas Faehlmann and Eberhard Vogdt) [2] It was the only case in the history of Olympics then five Estonian sportspeople got medals in the same event. [3]

After World War II and the Soviet re-occupation of Estonia Vekshin continued yacht racing. He won a silver medal of the USSR championship in 1945. He received his Soviet Master of sports title the same year. [2]

Paul Bert Elvstrøm was a Danish yachtsman. He won four Olympic gold medals and thirteen world titles in a range of classes including Snipe, Soling, Star, Flying Dutchman and Finn.

Dmitry Nikolaevich Medvedev was one of the leaders of the Soviet partisan movement in western Russia and Ukraine.

Martin Klein was an Estonian wrestler who competed for the Russian Empire at the 1912 Summer Olympics. He won the silver medal in the middleweight class, becoming the first Olympic medalist from Estonia. In the semifinal against the reigning world champion Alfred Asikainen, the two grappled for 11 hours and 40 minutes on a sunny day outdoors, until Klein managed to pin Asikainen. Klein was so exhausted from the bout – the longest wrestling match ever recorded – that he was unable to wrestle for the gold the next day, leaving Swedish wrestler Claes Johansson with the gold medal. 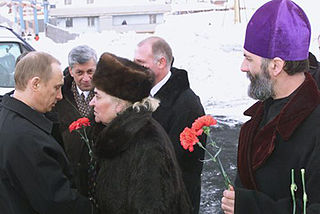 Norillag, Norilsk Corrective Labor Camp was a gulag labor camp set by Norilsk, Krasnoyarsk Krai, Russia and headquartered there. It existed from June 25, 1935 to August 22, 1956. 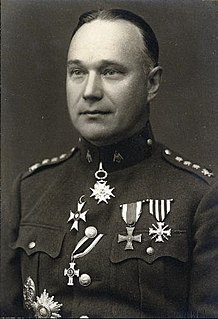 Herbert Lorentz Brede was an Estonian soldier and general. 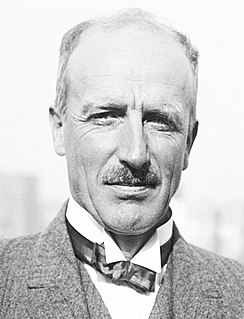 Georg Faehlmann was an Estonian sailor who competed in the 1928 Summer Olympics.

Andreas Faehlmann was an Estonian aviation engineer and sailor who competed in the 1928 Summer Olympics. He was born in Vladivostok, Russian Empire, and died in Bremen, Germany. In 1928 he was a crew member of the Estonian boat Tutti V, which won the bronze medal in the 6 metre class. His older brother Georg was also a crew member. His great grand uncle was the notable Estonian philologist and physician Friedrich Robert Faehlmann.

William von Wirén was an Estonian sailor who competed in the 1928 Summer Olympics.

Nikolai Stepulov was an Estonian lightweight boxer, military officer and criminal. As a boxer he won silver medals at the 1936 Olympics and 1937 European Championships, and fought professionally in 1938–39. Ethnically Russian, at the onset of World War II Stepulov joined the Soviet militia and ordered to shoot peaceful members of the Estonian Defense League; this act was condemned by both sides and resulted in Stepulov serving a jail sentence in the Soviet Union. Later after returning to Estonia he was arrested a few times for burglary and died in a prison hospital.

The Norilsk uprising was a major strike by Gulag inmates in Gorlag, a special camp mostly for political prisoners, and later in the two camps of Norillag [ITL], Norilsk, USSR, now Russia, in the summer of 1953, shortly after Joseph Stalin's death. About 70% of inmates were Ukrainians, many of whom had been sentenced for 25 years to the so-called "Bandera Standard". It was the first major revolt within the Gulag system in 1953-1954, although earlier numerous cases of unrest in Gulag camps are known. It was led by Pavel Frenkiel in 1 camp, by Boris Shamaev in 3-d camp, by Yevhen Hrytsyak in 4-th camp, by Pavel Filnev in 5-th camp and by Lesya Zelenska in 6-th camp.

Lowell Orton North was an American sailor and Olympic Gold Medalist. He competed at the 1968 Summer Olympics in Mexico City, where he received a gold medal in the Star class with the boat North Star, together with Peter Barrett.

Andrew James "Bart" Simpson, MBE, was an English sailor who won a gold medal at the 2008 Summer Olympics in Beijing, as crew for skipper Iain Percy in the Star class representing Great Britain. Simpson died in the capsize of the catamaran he was crewing on 9 May 2013, while training for the America's Cup in San Francisco Bay.

Mark Mendelblatt is an American yachtsman. Married to Carolina Borges He primarily sails the Laser, a one-design class of small single-handed sailing dinghy. Beginning in 2005, he also started to race in the two-person keelboat Star class.

Vekshin or Vekšin is a Russian masculine surname, its feminine counterpart is Vekshina. It may refer to