Nina Ilyinichna Preobrazhenskaya (Russian : Нина Ильинична Преображенская, born 16 February 1956) is a Soviet rower. She first competed, under her maiden name Nina Antoniuk, at an international level at the 1977 World Rowing Championships in Amsterdam, Netherlands, where she won silver with the women's eight. At the subsequent championships in 1978 and 1979, she became world champion in that boat glass. [1] At the 1980 Summer Olympics, she won a silver medal with the women's eight. [2] 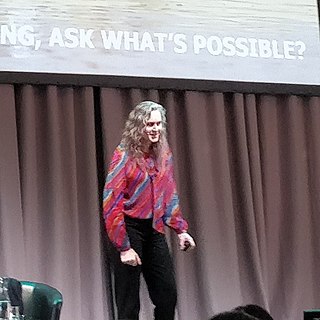 Dr Catherine Bishop is a former British rower. In partnership with Katherine Grainger she was World Champion in the coxless pair in 2003, and in 2004 they won a silver medal at the Olympic Games. Following a career as a diplomat she is now a leadership speaker, writer and consultant.

Lesley Allison Thompson-Willie is a Canadian rowing coxswain and Olympic champion. Between 1984 and 2016, she has competed at eight Olympic Games, a record for a rower, winning medals in five of them including gold in coxed eight at the 1992 Summer Olympics in Barcelona.

Marina Wilke is a German rowing cox who competed for East Germany in the 1976 and 1980 Summer Olympics.

Rodica Arba is a retired Romanian rower. She competed at the 1980, 1984 and 1988 Olympics and won two gold, one silver, and one bronze medal. At the world championships she won four gold, one silver and two bronze medals between 1981 and 1987, mostly in coxless pairs.

Olympia Aldersey is an Australian rower. She is an Australian national champion, an Olympian and a current (2019) World Champion in the coxless four. In 2014 she set a world's fastest ever time (6:37.31) in a women's double scull over 2000m, a record which has stood since. 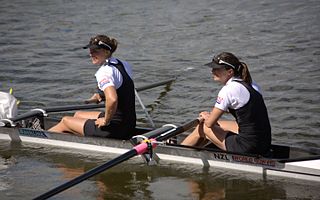 Adelina Maria Boguș is a Romanian rower. She competed in the women's eight event at the 2012 and 2016 Summer Olympics, winning a bronze medal.

Nina Dmitriyevna Umanets is a Ukrainian rower. She competed in the women's eight for the Soviet Union at the 1980 Summer Olympics where she won the silver medal. Umanets also won five gold medals at the World Rowing Championships.

Victoria Thornley is a Welsh rower who was a member of the Great Britain team that finished fifth in the women's eight at the 2012 Summer Olympics.

Kerri Gowler is a New Zealand rower. She is a national champion, an Olympian, a three-time world champion and a current (2019) world champion in the both the coxless pair and the women's eight.

Emma Dyke is a New Zealand rower. She is a 2019 world champion winning the women's eight title at the 2019 World Rowing Championships.

Frances "Francie" Turner is a New Zealand coxswain. She competed at the Rio Olympics with the New Zealand women's eight.

Andrea Re is an Italian lightweight rower. With eight gold medals at World Rowing Championships, he is one of the most successful rowers ever. He represented Italy at the 1996 Summer Olympics in Atlanta, USA.