Te-Oneroa-a-Tōhē / Ninety Mile Beach [1] is on the western coast of the far north of the North Island of New Zealand. [2] The beach is actually 88 kilometres (55 miles) long. [3] Its southern end is close to the headland of Tauroa Point, to the west of Ahipara Bay, near Kaitaia. From there it sweeps briefly northeast before running northwest along the Aupouri Peninsula for the majority of its length. It ends at Tiriparepa / Scott Point, 5 kilometres (3 mi) south of Cape Maria van Diemen and about 10 kilometres (6 mi) south of Cape Reinga / Te Rerenga Wairua.

The beach is officially a public highway [4] and is used as an alternative to State Highway 1 north of Kaitaia, though mainly for tourist trips, or when the main road is closed due to landslides or floods.[ citation needed ] The beach and the dunes at Te Paki in the north are a tourist destination. The Te Paki dunes, which look much like a desert landscape, are used for sandboarding.

In the days of sailing ships a number of vessels were wrecked on the beach. [5]

In 1932 the beach was used as the runway for some of the earliest airmail services between Australia and New Zealand.

Ninety Mile Beach was included as part of Te Araroa [6] when it officially opened in 2011.

In a 2013 feature for the British television motoring programme Top Gear , Jeremy Clarkson drove the length of the beach in a Toyota Corolla [7] as part of a race against an AC45 racing yacht crewed by British Olympic sailor Sir Ben Ainslie and the winning crew of the 2010 America's Cup, with James May also on board. [8]

Te-Oneroa-a-Tōhē / Ninety Mile Beach is one of many places in New Zealand to have a dual name, consisting of both its former English name and its Māori name. This dual name was adopted in 2014 as a result of a Treaty of Waitangi settlement between the New Zealand government and Ngāti Kuri, an iwi based in the area around the beach. [1] The Māori name for the beach translates as "the long beach of Tōhē", referencing an early ancestor of Ngāti Kuri. [9] The English portion of the dual name has unclear origins and is often the source of confusion, given that the beach is only 55 miles (89 km) long – not ninety. A common story for the name holds that early Europeans took three days to traverse the beach, with their horses typically able to cover thirty miles per day. According to the legend, the Europeans took this to mean that the beach was 90 miles long, failing to account for their slower speed due to the sand. [10] Despite the popularity of this story, it is unclear whether there is any historical basis for this story, however.

The Northland Region is the northernmost of New Zealand's 16 local government regions. New Zealanders sometimes refer to it as the Winterless North because of its mild climate all throughout the year. The main population centre is the city of Whangārei, and the largest town is Kerikeri. At the 2018 New Zealand census, Northland recorded a surprising population growth spurt of 18.1% since the previous 2013 census, placing it as the fastest growing region in New Zealand, ahead of other strong growth regions such as the Bay of Plenty and Waikato.

Kaitaia is a town in the Far North District of New Zealand, at the base of the Aupouri Peninsula, about 160 km northwest of Whangarei. It is the last major settlement on State Highway 1. Ahipara Bay, the southern end of Ninety Mile Beach, is 5 km west. 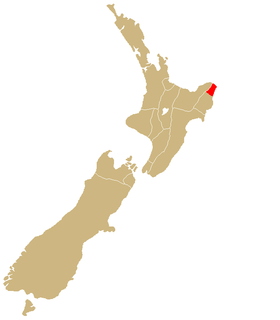 The Clarence River is a major river which flows through the Kaikōura Ranges in the northeast of New Zealand's South Island. At roughly 209 kilometres (130 mi) long, it is the longest river in Canterbury and the eighth longest in New Zealand.

Spirits Bay, officially named Piwhane / Spirits Bay, is a remote bay at the northern end of the Aupouri Peninsula, which forms the northern tip of New Zealand's North Island. It lies between Cape Reinga / Te Rerenga Wairua in the west and Ngataea / Hooper Point in the east. It is one of two bays in the short length of coast at the top of the North Island.

Te Aupōuri is the second northernmost Māori iwi, located north of Kaitaia, Northland, New Zealand, a region known as the Te Hiku o te Ika. The iwi is one of the six Muriwhenua iwi of the far north of the North Island. 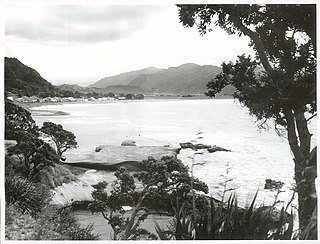 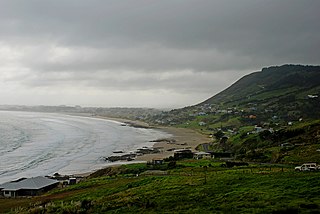 Ahipara is a town and locality in Northland, New Zealand at the southern end of Ninety Mile Beach, with the Tauroa Peninsula to the west and Herekino Forest to the east. Ahipara Bay is to the north west. Kaitaia is 14 km to the north east, and Pukepoto is between the two. 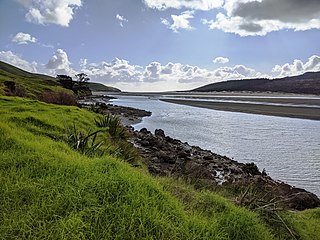 Herekino is a locality in Northland, New Zealand. It lies 26 km south west of Kaitaia. The Herekino Harbour, also called the Herekino River, is an estuary and inlet from the Tasman Sea to the west. The Herekino Forest, which contains a stand of large kauri, is to the north, and the Tauroa Peninsula lies to the north west.

Ngataki is a community on the Aupouri Peninsula in Northland, New Zealand. State Highway 1 runs through the area. To the east is Rarawa Beach, a mile-long strip of clean silver sand, gently shelving and backed by sand dunes. To the north-east is the Great Exhibition Bay and Rarawa Bay and to the south-west is the long Ninety Mile Beach coastline.

Ngāi Takoto is a Māori iwi from Northland, New Zealand. The iwi is one of the six Muriwhenua iwi of the far north of the North Island. Ngāi Takoto trace their whakapapa (ancestry) back to Tuwhakatere, and trace their arrival in New Zealand to the Kurahaupo waka (canoe). The rohe of the iwi is focused on the upper North Island and extends to Kermadec Islands, Three Kings Island, Cape Reinga, Pao Island, Ninety Mile Beach, Waimimiha River, Ohaku hills, Whangatane River, Rangaunu Harbour and North Cape.

Ngāti Kahu is a Māori iwi of Northland, New Zealand. The iwi is one of the six Muriwhenua iwi of the far north of the North Island. Ngāti Kahu take their name from their founding ancestress, Kahutianui, and link their ancestry back to the waka Māmaru. The captain of Māmaru was Te Parata who married Kahutianui.

Ngāti Kurī is a Māori iwi from Northland, New Zealand. The iwi is one of the five Muriwhenua iwi of the far north of the North Island. Ngāti Kurī trace their whakapapa (ancestry) back to Pōhurihanga, the captain of the waka (canoe) Kurahaupō. Kurī, in Māori, means "dog". The rohe of the iwi is focused on the most northern tip of the North Island and includes the Kermadec Islands, Three Kings Island, Cape Reinga, Ninety Mile Beach, Parengarenga Harbour, Te Kao and Houhora.

Rongowhakaata is a Māori iwi of the Gisborne region of New Zealand.

Te Rarawa is a Māori iwi of Northland, New Zealand. The iwi is one of five Muriwhenua iwi of the far north of the North Island.

Muriwhenua are a group of northern Māori iwi, based in Te Hiku o te Ika, the northernmost part of New Zealand's North Island. It consists of six iwi, Ngāti Kurī, Ngāi Takoto, Te Pātū, Ngāti Kahu, Te Aupōuri and Te Rarawa, with a combined population of about 34,000 people. The spiritually significant Hokianga Harbour, located just to the south of the Maungataniwha Range, is of special significance to the Muriwhenua people.

Riria Smith was a master in traditional Māori weaving from Northland in New Zealand. She was affiliated to the iwi Ngāti Kurī and the hapū Pohutiare of Te Aupōuri.

Te Paki Sand Dunes, also called the Giant Sand Dunes, are a collection of sand dunes located on the Northland Peninsula of New Zealand. The dunes abut the Ninety Mile Beach and are a popular spot for sandboarding.

Maniniaro / Angelus Peak is a mountain in Nelson Lakes National Park, near the northwestern extent of New Zealand's main divide. Although it is not the tallest peak in the Angelus Ridge or the wider Travers Range, Maniniaro remains a popular tramping destination and is significant to the Ngāti Apa ki te Rā Tō iwi, who claim mana whenua within the area. According to Ngāti Apa ki te Rā Tō beliefs, the mountain is intrinsically linked with nearby Rotomaninitua / Lake Angelus, with the two both said to represent the footprints of the iwi's ancestors as they embarked on their journey back to Hawaiki. It is also near both major lakes of the national park, being roughly 6 kilometres (3.7 mi) from the southern ends of both Lakes Rotoiti and Rotoroa.