Masuda plays on the Japan Golf Tour, where he has won once.

Nobuhiro Nishiwaki, better known by his pen name Nobuhiro Watsuki, is a Japanese manga artist. He is best known for his samurai-themed series Rurouni Kenshin: Meiji Swordsman Romantic Story (1994–1999), which has over 70 million copies in circulation and a sequel he is currently creating titled Rurouni Kenshin: The Hokkaido Arc (2017–present). He has written three more series, the western Gun Blaze West (2001), the supernatural Buso Renkin (2003–2005), and the horror manga Embalming -The Another Tale of Frankenstein- (2007–2015). Watsuki has mentored several well-known manga artists, including One Piece creator Eiichiro Oda, Hiroyuki Takei of Shaman King fame, and Mr. Fullswing author Shinya Suzuki.

Katsunari Takahashi is a Japanese professional golfer of Korean ancestry.

Takeda Nobuhiro, also known as Kakizaki Nobuhiro was the ancestor of the Matsumae clan, and is celebrated for his role in suppressing the 1457 Ainu revolt of Koshamain. The adopted son of Takeda Nobukata, shugo (Governor) of Wakasa Province, he was later re-adopted by Kakizaki Sueshige. Some sources say he was originally of the Minabe clan.

The Yomiuri Open was a golf tournament on the Japan Golf Tour from 1979 to 2006. In 2007 it merged with the Mizuno Open to form the Gateway to the Open Mizuno Open Yomiuri Classic. It was played at the Yomiuri Country Club in Hyogo from at least 1985 to 2006, except in 1996 when it was played at Wakasu Golf Links in Tokyo.

The Chushikoku Open is a golf tournament which was on the Japan Golf Tour from 1973 to 1991. It was first played in 1971. The event is usually held in September at a variety of courses in Southern Honshu and on Shikoku island.

The Hokkaido Open is a golf tournament which was on the Japan Golf Tour from 1977 to 1991. It was first played in 1967. It is played in September at a variety of courses in Hokkaidō.

Kaze no Daichi is a Japanese golf manga series written by Nobuhiro Sakata and illustrated by Eiji Kazama. It has been published by Shogakukan in Big Comic Original since 1991 and collected in 71 tankōbon volumes as of 2018. It received the 1993 Shogakukan Manga Award for general manga.

Tatsuko Ohsako is a Japanese professional golfer who played on the LPGA of Japan Tour (JLPGA) and the LPGA Tour.

Tu Ai-yu is a Taiwanese professional golfer who played on the LPGA of Japan Tour (JLPGA) and the LPGA Tour.

Nobuhiro is a masculine Japanese given name. Notable people with the name include:

Masuda is a Japanese surname. Notable people with the surname include:

Utsunomiya Blitzen is a Japanese UCI Continental cycling team. It was established in 2009 with a home base in Utsunomiya, Tochigi, the location of the Japan Cup cycling race.

The 2018 Japan Golf Tour season was played from 18 January to 2 December. The season consisted of 25 official money events, mostly in Japan, as well as the four majors. One event was played in Singapore, and one in Myanmar, both co-sanctioned by the Asian Tour. 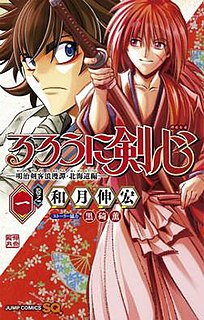 Rurouni Kenshin: Meiji Swordsman Romantic Story The Hokkaido Arc is a Japanese manga series written and illustrated by Nobuhiro Watsuki, with story consultation by his wife Kaworu Kurosaki. It is a direct sequel to Rurouni Kenshin and follows Himura Kenshin and his friends in 1883 Japan as they traverse Hokkaido in search of his father-in-law.