Geostationary orbit is a geosynchronous example of an equatorial orbit. 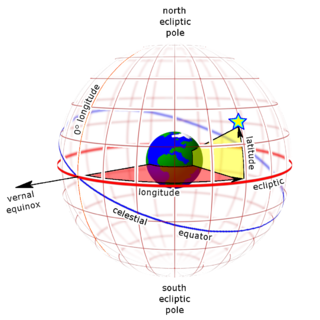 A wet moon is the visual phenomenon when the "horns" of the crescent Moon point up at an angle, away from the horizon, so that the crescent takes on the appearance of a bowl or smile. A wet moon occurs when the crescent Moon is low above the horizon and at a point more or less directly above the Sun's (invisible) position below the horizon. This in turn is determined by the positions of the Moon and Earth in their respective orbits, the inclinations of these orbits relative to one another and to Earth's celestial equator, and the observer's latitude on Earth. Wet moons occur routinely in the tropics, but rarely in the polar regions.

An orbital node is either of the two points where an orbit intersects a plane of reference to which it is inclined. A non-inclined orbit, which is contained in the reference plane, has no nodes. 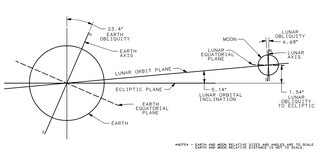 The Moon orbits Earth in the prograde direction and completes one revolution relative to the Vernal Equinox and the stars in about 27.32 days and one revolution relative to the Sun in about 29.53 days. Earth and the Moon orbit about their barycentre, which lies about 4,600 km (2,900 mi) from Earth's center. On average, the distance to the Moon is about 385,000 km (239,000 mi) from Earth's center, which corresponds to about 60 Earth radii or 1.282 light-seconds. 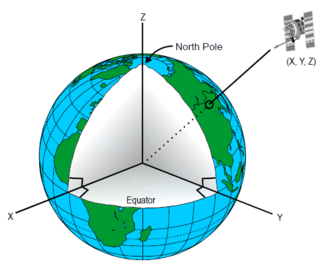