Yu Yu Hakusho is a Japanese manga series written and illustrated by Yoshihiro Togashi. The series tells the story of Yusuke Urameshi, a teenage delinquent who is struck and killed by a car while attempting to save a child's life. After a number of tests presented to him by Koenma, the son of the ruler of the afterlife Underworld, Yusuke is revived and appointed the title of "Underworld Detective", with which he must investigate various cases involving demons and apparitions in the human world. The manga becomes more focused on martial arts battles and tournaments as it progresses. Togashi began creating Yu Yu Hakusho around November 1990, basing the series on his interests in the occult and horror films and an influence of Buddhist mythology. 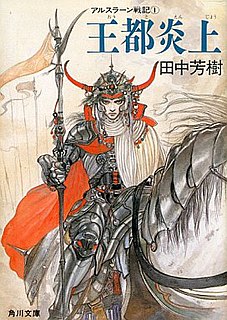 The Heroic Legend of Arslan is a Japanese fantasy novel series written by Yoshiki Tanaka. It was published from 1986 to 2017, with sixteen novels and one side-story in the official guidebook Arslan Senki Dokuhon. Set in ancient Persia, it is loosely based on the Persian epic of Amir Arsalan.

Ninku is a Japanese manga series written and illustrated by Kōji Kiriyama. It was published in Shueisha's Weekly Shōnen Jump from June 1993 to September 1995. Shueisha compiled its chapters into nine tankōbon volumes. Ninku was adapted into an anime television series produced by Fuji Television, Yomiko Advertising and Studio Pierrot, which aired on Fuji TV between January 1995 and February 1996. 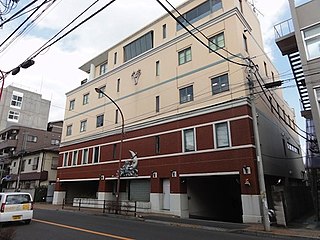 Linda Chambers-Young is an American voice actress who voices characters in Japanese anime series, usually in voice productions produced by Funimation. Her most notable roles are Frieza in Dragon Ball Z and Baba in Dragon Ball as well as Genkai in Yu Yu Hakusho.

Akiyuki Shinbo is a Japanese animator, director, writer, and storyboard artist. Best known for his works with Shaft, he has attained international recognition with the studio for his unique visual style and storytelling methods.

Ryūtarō Nakamura was a Japanese director and animator, best known for directing the landmark anime series Serial Experiments Lain, and for his collaboration with Masamune Shirow and Chiaki J. Konaka on Ghost Hound.

The first season of the Yu Yu Hakusho anime series, the Spirit Detective Saga, was directed by Noriyuki Abe and produced by Fuji Television, Yomiko Advertising and Studio Pierrot. The episodes were released in North America by Funimation. The season adapts Yoshihiro Togashi's Yu Yu Hakusho manga from the first through sixth volumes over twenty-five episodes. The episodes follow the story of Yusuke Urameshi, a teenage boy who dies in an accident, and is resurrected as a Spirit Detective, Spirit World's protector of the Living World against demons and other supernatural threats.

The second season of the Yu Yu Hakusho anime series, known as the Dark Tournament Saga, was directed Noriyuki Abe and produced by Fuji Television, Yomiko Advertising and Studio Pierrot. The episodes were released in North America by Funimation. Like the rest of the series, it adapts Yoshihiro Togashi's Yu Yu Hakusho manga from the sixth through the thirteenth volumes over forty episodes. The episodes cover the story of Yusuke Urameshi and how his tenure as Spirit Detective led him to participate in the "Dark Tournament," a competition between demons to determine the strongest supernatural inhabitants of the Living World. 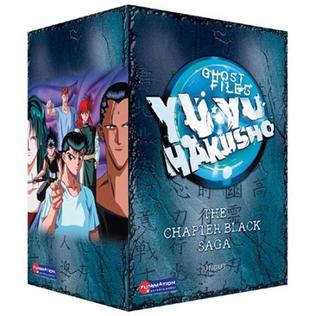 The third season of the Yu Yu Hakusho anime series, known as the Chapter Black Saga, was directed by Noriyuki Abe and produced by Fuji Television, Yomiko Advertising and Studio Pierrot. The episodes were released in North America by Funimation. Like the rest of the series, it adapts Yoshihiro Togashi's Yu Yu Hakusho manga from the thirteenth through seventeenth volumes over twenty-eight episodes. The episodes follow Spirit Detective Yusuke Urameshi and his conflict with a former Spirit Detective, Shinobu Sensui, and the latter's desire to open the gateway to Makai. 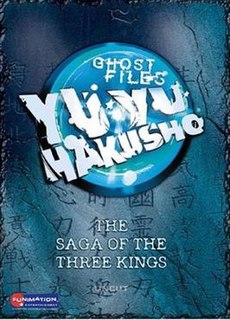 The fourth and final season of the Yu Yu Hakusho anime series, known as the Saga of the Three Kings, was directed Noriyuki Abe and produced by Fuji Television, Yomiko Advertising and Studio Pierrot. The episodes were released in North America by Funimation. It adapts Yoshihiro Togashi's Yu Yu Hakusho manga series by Yoshihiro Togashi from the seventeenth through nineteenth volumes over eighteen episodes. The episodes cover Yusuke Urameshi's journey to Makai to meet his demon ancestor, and his attempts to resolve the unstable political situation in Makai.

Mitsuo Hashimoto is a Japanese storyboard artist and director of television, OVA, and anime films. He previously worked under 橋本 光夫, but changed as someone else was using that name. While he was under contract with Toei Animation, he also did work for other companies under the name Genjūrō Tachibana.

Yasuichiro Yamamoto is a Japanese anime director, and storyboard artist. He is best known for directing the majority of Detective Conan.

Masayoshi Nishida is a Japanese anime director. He worked at the Tatsunoko Animation Technical Institute before joining Tezuka Productions. He has directed Mokke and Allison & Lillia and drawn storyboards for all episodes. During this time, he also worked as the chief director of Eyeshield 21, where he continued to draw storyboards without pause, and along with Kodera, Fukuda, and Sunaga, he earned the honor of being a super-fast storyboarder, but he was also known as a super-fast animator. His favorite anime is Haguregumo.

Shinji Takamatsu is a Japanese storyboard artist, screenwriter, and director.

Yūsuke Kobayashi is a Japanese voice actor from Tokyo, Japan. He is affiliated with Yu-rin Pro. In 2017, he won the Best New Actor Award at the 11th Seiyu Awards.

Kochoki is an original anime television series produced by Studio Deen that aired from July 8 to September 23, 2019.