Norman Jaques (June 29, 1880 –January 31, 1949) was a Canadian farmer and federal politician. Jaques represented the electoral district of Wetaskiwin in the House of Commons of Canada from 1935 to 1949. Jaques was a member of the Social Credit Party.

Jaques was born in London, England, and attended Eastborne College in Sussex. He moved to Canada in 1901, and became a farmer in Mirror, Alberta. He sought to establish a horse-breeding farm at one stage, but later abandoned the project. [1] He had retired from farming before starting his political career. [2]

Jaques first ran for the Canadian House of Commons in the 1935 federal election, and defeated Cooperative Commonwealth Federation incumbent William Irvine amid a landslide victory for Social Credit candidates in Alberta. He was re-elected in the general elections of 1940 and 1945, receiving less than 40% of the vote on both occasions. Near the end of his career, he was a member of an external affairs committee that attended United Nations meetings at Lake Success. [3] He died in office in 1949, having been re-nominated as a Social Credit candidate for the 1949 federal election. Social Credit had little standing outside of Alberta during this period, and elected few legislators at the national level. Jaques spent his entire parliamentary career as an opposition member.

The Social Credit movement gained a reputation for anti-Semitism in its early years, and Jaques was widely regarded as the most anti-Semitic member of the party's parliamentary grouping. He promoted C.H. Douglas's belief in an international financial Jewish conspiracy, and attempted to read excerpts from Protocols of the Elders of Zion into the Canadian parliamentary record. [4] In private correspondence, he told a Saskatchewan resident that "the Jews control all means of gathering news and of propaganda". [5] Jaques also believed that an international Jewish conspiracy was responsible for both communism and Zionism. He opposed allowing Jewish refugees into Canada prior to World War II on the argument that they constituted a communist invasion force, and once dismissed the charge of anti-Semitism against him as a "communist smokescreen". [6] He was a vocal opponent of the creation of the State of Israel in 1947–48, and described Zionism as "a political movement ... to dominate the world". Janine Stingel has written that Jaques, in common with other ideologues in his party, "was either unwilling or unable to separate anti-Zionism from anti-Semitism". [7]

Jaques met with American anti-Semitic leader Gerald L. K. Smith in 1947, and was quoted by the Montreal Gazette as saying that "Gerald Smith is truly a great Christian gentleman who has been cruelly maligned. He stands for Christian nationalism. But, of course, the Communists have smeared him as anti-semitic... Smith believes in America for the Americans and in the American way of life... I have tried to do the same with the Canadian way of life and Canadian freedom and I will keep right on trying". Jaques later retracted his support for Smith, and said that most of the quotations attributed to him by the Gazette were fabrications. He did, however, describe Smith as having "done more to expose communist plots that any other public man in the United States of America", and said that he would try to do the same in Canada. The Anti-Defamation League described Jaques as a "notorious anti-semite who has abused the privilege of entry into the United States by stirring up misunderstanding and tensions among racial and religious groups." [8]

Jaques was also an opponent of the Canadian Broadcasting Corporation, which he accused of promoting communism. [9]

Some other members of the Social Credit Party attempted to distance themselves from Jaques. Solon Earl Low, who became national party leader in 1944 and himself made anti-Semitic statements alleging a conspiracy of Jewish bankers, [10] nevertheless said in private correspondence that Jaques "considered himself above party discipline and [...] absent[ed] himself from all caucuses". [11] Toward the end of his life, Jaques's writings were banned from the official Social Credit party journal. [12]

Rootless cosmopolitan was a pejorative Soviet epithet which referred mostly to Jewish intellectuals as an accusation of their lack of full allegiance to the Soviet Union, especially during the anti-cosmopolitan campaign of 1948–1953.

New antisemitism is the concept that a new form of antisemitism has developed in the late 20th and early 21st centuries, tending to manifest itself as opposition to Zionism and criticism of the Israeli government. The concept is included in some definitions of antisemitism, such as the Working Definition of Antisemitism and the 3D test of antisemitism.

Joseph Baruch (J.B.) Salsberg was a politician in Ontario, Canada. He was a Labor-Progressive member of the Legislative Assembly of Ontario from 1943 to 1955 who represented the riding of St. Andrew in downtown Toronto. He was a longtime Communist and activist in the Jewish community.

Solon Earl Low was a Canadian politician, farmer, teacher, and school principal in the 20th century. 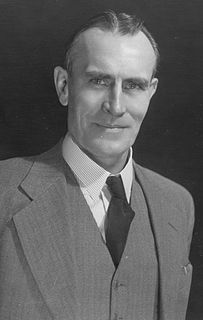 Ronald A. Gostick was a long-time figure on the Canadian far right and founder of the Canadian League of Rights. Gostick was involved in the Canadian social credit movement and later published far-right and antisemitic material over the course of 50 years, including the Canadian Intelligence Service and On Target! and numerous books and pamphlets.

William Tomyn was a politician and teacher from Alberta, Canada. He served in the Legislative Assembly of Alberta from 1935 to 1952 and again from 1959 to 1971 as a member of the Social Credit Party.

Jewish Bolshevism, also Judeo–Bolshevism, is an anti-communist and antisemitic canard, which alleges that the Jews were the originators of the Russian Revolution in 1917, and that they held primary power among the Bolsheviks who led the revolution. Similarly, the conspiracy theory of Jewish Communism alleges that Jews have dominated the Communist movements in the world, and is related to the Zionist Occupation Government conspiracy theory (ZOG), which alleges that Jews control world politics.

Anthony Hlynka was a Canadian journalist, publisher, immigration activist and politician. He represented Vegreville in the House of Commons of Canada from 1940 to 1949 as a member of the Social Credit Party of Canada. He is best remembered for his attempts to reform Canada's immigration laws after World War II to permit the immigration of Ukrainian displaced persons.

Samuel William "Sam" Jacobs,, was a Canadian lawyer, Member of Parliament and a leader of the Canadian Jewish community. For many years he was the only Jewish MP in the House of Commons of Canada. He was first elected from the Montreal riding of George-Étienne Cartier in the 1917 federal election as a Laurier Liberal and remained in parliament as a Liberal MP until his death in 1938.

Anti-Zionism is opposition to Zionism. The term is broadly defined in the modern era as opposition to the State of Israel or, prior to 1948, its establishment, as well as to the political movement of Jews to self-determination.

The Cooperative Commonwealth Federation ran candidates in the 1940 Canadian federal election, and elected six members to emerge as the fourth-largest party. Some of the party's candidates have their own biography pages; information about others may be found here.

The 1917 Russian Revolution overthrew a centuries-old regime of official antisemitism in the Russian Empire, including its Pale of Settlement. However, the previous legacy of antisemitism was continued by the Soviet state, especially under Joseph Stalin. Antisemitism in the Soviet Union reached new heights after 1948 during the campaign against the "rootless cosmopolitan", in which numerous Yiddish-writing poets, writers, painters and sculptors were killed or arrested. This culminated in the so-called Doctors' plot, in which a group of doctors were subjected to a show trial for supposedly having plotted to assassinate Stalin.

Joseph Lucien Paul Maynard was a lawyer and a provincial politician from Alberta, Canada. He served in the Legislative Assembly of Alberta from 1935 to 1955 as a member of the Social Credit Party. 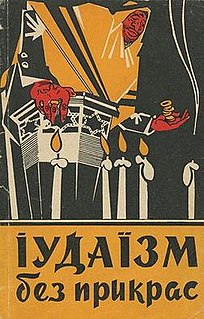 Judaism Without Embellishment was an anti-Semitic book published in 1963 by the Ukrainian Academy of Sciences. The book was written by Trofim Kichko, who worked at the Academy, who had past associations with Nazi Germany. The book argued that a worldwide Jewish conspiracy existed, that the Jewish people were attempting to subvert the Soviet Union, and had played a role in the 1941 Nazi-German invasion of the country. The book was illustrated throughout with caricatures depicting Jewish people in a stereotypical and prejudicial manner, very similar to those that had been seen in Nazi anti-Semitic propaganda.

Albert Vital Bourcier was a provincial politician from Alberta, Canada. He served as a member of the Legislative Assembly of Alberta from 1935 to 1952, sitting with the Social Credit caucus in government.