Last updated October 23, 2021
American political scientist
Not to be confused with Norman Orenstein.

Norman Jay Ornstein ( /ˈɔːrnstiːn/ ; born October 14, 1948) is an American political scientist and an Emeritus scholar at the American Enterprise Institute (AEI), a Washington, D.C. conservative think tank. He is the co-author (along with Thomas E. Mann) of It's Even Worse Than It Looks: How the American Constitutional System Collided With the New Politics of Extremism .

Norman Jay Ornstein was born in Grand Rapids, Minnesota [2] on October 14, 1948. [3] His father was a traveling salesman, and the family spent much of Norman's childhood in Canada. He was a child prodigy, graduated from high school when he was fourteen and from college when he was eighteen. [4] He received his BA from the University of Minnesota, [5] and subsequently, received a Ph.D. in political science from the University of Michigan in 1974. [6] By the mid-1970s, he had become a professor of political science at Catholic University in Washington, D.C. and was establishing a reputation as an expert on the United States Congress. [7]

Ornstein studies American politics and is a frequent contributor to The Washington Post and many magazines, such as The Atlantic and the National Journal . [8] He wrote a weekly column for Roll Call from 1993 until April 10, 2013, and was co-director, along with Thomas E. Mann, of the AEI-Brookings Election Reform Project. He helped draft key parts of the Bipartisan Campaign Reform Act of 2002, also known as the McCain-Feingold Act. [9] Ornstein is a registered Democrat, [1] but considers himself a centrist, and has voted for individuals from both parties. [10]

Ornstein is a member of the advisory board of the Future of American Democracy Foundation, [11] a nonprofit, nonpartisan foundation in partnership with Yale University Press and the Yale Center for International and Area Studies "dedicated to research and education aimed at renewing and sustaining the historic vision of American democracy". [12] He also served on the advisory board of the Institute for Law and Politics at the University of Minnesota Law School. [13] Ornstein is also a member of the board of directors of the nonpartisan election reform group Why Tuesday?. He is on the advisory council of the cross-partisan grassroots campaign Represent.Us, [14] where he served as a consultant in the crafting of the American Anti-Corruption Act.

Foreign Policy named Ornstein, along with Thomas E. Mann, one of its 2012 Top 100 Global Thinkers "for diagnosing America's political dysfunction". [15]

As of 2013, Ornstein has become known for "blistering critiques of Congress", which he has been following for the past three decades. [8] [16]

He opposed President Donald Trump. [18] He also criticized the Electoral College, saying that the more presidents are elected without the popular vote, "the more you get the sense that voters don’t have a say in the choice of their leaders". [19]

Ornstein is married to Judith L. Harris, a litigation attorney specializing in regulatory matters. He is a long-time friend of former U.S. Senator and comedian Al Franken. [10] A fictional version of Ornstein appears in Franken's political spoof novel, Why Not Me? , as the campaign manager for Franken's improbable presidential run. [20]

Ornstein and his wife, as well as their younger son Danny, established the Matthew Harris Ornstein Memorial Foundation in honor of the couple's eldest son, who died in 2015 at age 34 from accidental carbon monoxide poisoning. [21] [22] [23] 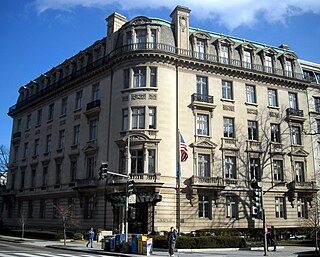 The American Enterprise Institute for Public Policy Research, known simply as the American Enterprise Institute (AEI), is a right-leaning Washington, D.C.–based think tank that researches government, politics, economics, and social welfare. AEI is an independent nonprofit organization supported primarily by contributions from foundations, corporations, and individuals. Founded in 1938, AEI is commonly associated with conservatism and neoconservatism but does not support political candidates. AEI advocates in favor of private enterprise, limited government, and democratic capitalism. 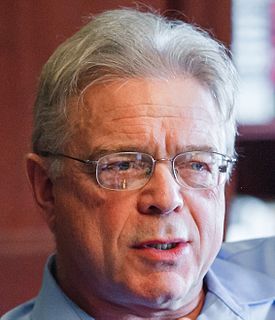 Thomas E. Mann is the W. Averell Harriman Chair and a senior fellow in Governance Studies at the Brookings Institution, a non-partisan think tank based in Washington, D.C. He primarily studies and speaks on elections in the United States, campaign finance reform, Senate and filibuster reform, Congress, redistricting, and political polarization.

Herbert Stein was an American economist, a senior fellow at the American Enterprise Institute, and a member of the board of contributors of The Wall Street Journal. He was the chairman of the Council of Economic Advisers under Richard Nixon and Gerald Ford. From 1974 to 1984, he was the A. Willis Robertson Professor of Economics at the University of Virginia.

Charles Alan Murray is an American political scientist, writer and public speaker. He is the W.H. Brady Scholar at the American Enterprise Institute, a conservative think tank in Washington, D.C. 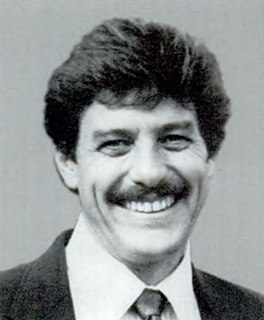 Milton Robert Carr, commonly known as Bob Carr, is an American lawyer, academic, and politician from the U.S. state of Michigan. 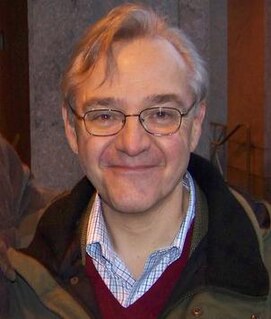 Eugene Joseph Dionne Jr. is an American journalist, political commentator, and long-time op-ed columnist for The Washington Post. He is also a senior fellow in governance studies at the Brookings Institution, a professor in the Foundations of Democracy and Culture at the McCourt School of Public Policy of Georgetown University, and an NPR, MSNBC, and PBS commentator.

Sally L. Satel is an American psychiatrist based in Washington, D.C. She is a lecturer at Yale University School of Medicine, the W.H. Brady Fellow at the American Enterprise Institute, and author. 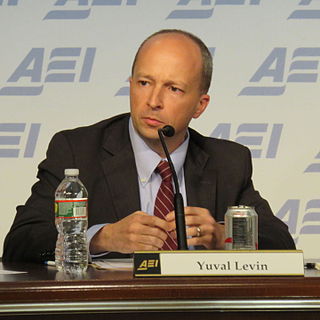 Michael S. Greve is a Professor at the George Mason University School of Law. Previously, he served as the John G. Searle Scholar and Director of the Federalism Project at the American Enterprise Institute. He is also a member of the board of directors of the Competitive Enterprise Institute. Greve's research interests include federalism, constitutional law, environmental policy, and Internet regulation.

Michael J. Malbin is a professor of Political Science at the University at Albany, The State University of New York. He was also the founding director of the Campaign Finance Institute (CFI) in Washington DC from 1999 until he retired from that position in 2020. His co-authored books while at CFI included The Election after Reform: Money, Politics and the Bipartisan Campaign Reform Act (2006), Life after Reform: When the Bipartisan Campaign Reform Act Meets Politics (2003) and Vital Statistics on Congress, co-authored with Norman Ornstein and Thomas E. Mann.

Chester Evans Finn Jr. is a former professor of education, an educational policy analyst, and a former United States Assistant Secretary of Education. He is currently the president emeritus of the nonprofit Thomas B. Fordham Foundation in Washington, D.C. He is also a Fellow of the International Academy of Education, an Adjunct Fellow at the Hudson Institute, and a senior fellow at Stanford University's Hoover Institution where he chairs the Koret Task Force on K-12 Education. He was also a member of the Maryland Kirwan Commission on Education during its authorization period from 2016 to 2019.

Christopher C. DeMuth is an American lawyer and a distinguished fellow at the Hudson Institute. He was the president of the American Enterprise Institute (AEI), a conservative think tank, from 1986 to 2008. DeMuth is widely credited with reviving AEI's fortunes after its near-bankruptcy in 1986 and leading the institute to new levels of influence and growth. Before joining AEI, DeMuth worked on regulatory issues in the Ronald Reagan administration. 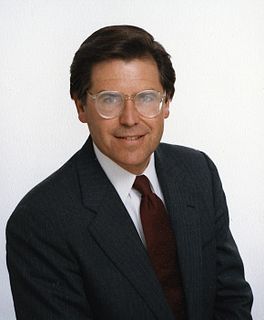 Peter J. Wallison is a lawyer and the Arthur F. Burns Fellow in Financial Policy Studies at the American Enterprise Institute. He specializes in financial markets deregulation. He was White House Counsel during the Tower Commission's inquiry into the Iran Contra Affair. He was a dissenting member of the 2010 Financial Crisis Inquiry Commission, frequent commentator in the mass media on the federal takeover of Fannie Mae and Freddie Mac and the financial crisis of 2007–2008 and wrote Hidden in Plain Sight (2015) about the crisis and its legacy.

Nicholas Eberstadt is an American political economist. He holds the Henry Wendt Chair in Political Economy at the American Enterprise Institute (AEI), a political think tank. He is also a Senior Adviser to the National Bureau of Asian Research (NBR), a member of the visiting committee at the Harvard School of Public Health, and a member of the Global Leadership Council at the World Economic Forum. He is the author of numerous books.

Walter Berns was an American constitutional law and political philosophy professor. He was a resident scholar at the American Enterprise Institute and a professor emeritus at Georgetown University.

John Holmes Makin was an American economist and resident scholar at the American Enterprise Institute. He was a consultant to the U.S. Treasury Department, the Congressional Budget Office, the International Monetary Fund, and the Bank of Japan. He specialized in international finance and financial markets, with special emphasis on both Japanese and European economies. Makin reported on the U.S. economy, writing on topics related to monetary policy, tax and budget issues, in monthly essays entitled "Economic Outlook," for the American Enterprise Institute (AEI). He was a principal at Caxton Associates from 1995–2010 before returning to AEI.

Richard K. Vedder is an American economist, historian, author, and columnist. He is a professor emeritus of economics at Ohio University and senior fellow at The Independent Institute. 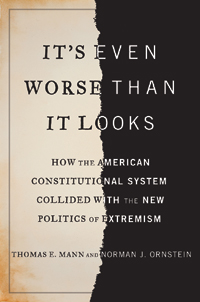 It's Even Worse Than It Looks: How the American Constitutional System Collided With the New Politics of Extremism is a 2012 book of political analysis authored by Thomas E. Mann of the Brookings Institution and Norman J. Ornstein of the American Enterprise Institute, published by Basic Books. In the work, they detail controversial issues surrounding the United States Congress and determine that the institution has become weakened to the point of being almost completely useless. The general political polarization and specific rise of hard-line ideological views have, in the authors' opinion, created such social division that the nation's federal system as a whole finds itself essentially unable to govern. Specifically, the authors criticize the U.S. Republican Party as becoming captured by a dogmatic right-wing fringe and functioning as "an insurgent outlier" in terms of the general American political spectrum.