The Senate's prerogatives and powers are similar to those of the other house, the House of Representatives. Its members do, however, represent districts that are larger than those of their colleagues in the House. The President of the Senate is the Lieutenant Governor of North Carolina, but the Lt. Governor has very limited powers and only votes to break a tie. Before the office of Lt. Governor was created in 1868, the Senate was presided over by a "Speaker." After the 1988 election of James Carson Gardner, the first Republican Lt. Governor since Reconstruction, Democrats in control of the Senate shifted most of the power held by the Lt. Governor to the senator who is elected President Pro Tempore (or Pro-Tem). The President Pro Tempore appoints members to standing committees of the Senate, and holds great sway over bills.

According to the state constitution, the Senate is also the "Court for the Trial of Impeachments". The House of Representatives has the power to impeach state officials, after which the Senate holds a trial, as in the federal system. If the Governor or Lt. Governor is the official who has been impeached, the Chief Justice of the North Carolina Supreme Court presides.

The qualifications to be a senator are found in the state Constitution: "Each Senator, at the time of his election, shall be not less than 25 years of age, shall be a qualified voter of the State, and shall have resided in the State as a citizen for two years and in the district for which he is chosen for one year immediately preceding his election."

The Delaware Senate is the upper house of the Delaware General Assembly, the state legislature of the U.S. state of Delaware. It is composed of 21 Senators, each of whom is elected to a four-year term, except when reapportionment occurs, at which time Senators may be elected to a two-year term. There is no limit to the number of terms that a Senator may serve. The Delaware Senate meets at the Legislative Hall in Dover.

The Indiana Senate is the upper house of the Indiana General Assembly, the state legislature of the U.S. state of Indiana. The Senate is composed of 50 members representing an equal number of constituent districts. Senators serve four-year terms without term limits. According to the 2010 U.S. census, the average state senator represents 129,676 people. 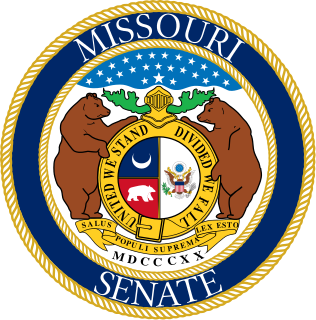 The Missouri Senate is the upper chamber of the Missouri General Assembly. It has 34 members, representing districts with an average population of 174,000. Its members serve four-year terms, with half the seats being up for election every two years. The Senate chooses a President Pro Tempore to serve in the absence of the lieutenant governor or when he shall have to exercise the office of governor of Missouri if there is a vacancy in that office due to death, resignation, impeachment, or incapacitation. 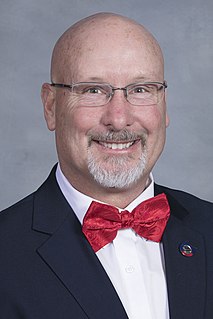 Robert Otho Hanig is an American politician who is a member of the North Carolina Senate, representing District 1. He was appointed by North Carolina Governor Roy Cooper to serve the remainder of Senator Bob Steinburg’s term representing District 1 following Sen. Steinburg’s resignation to seek the Republican nomination in Senate District 2. Hanig was first elected to the North Carolina House of Representatives after defeating incumbent Beverly Boswell in the primary election for House District 6 Hanig is an Army veteran and owns The Pool Guy Aquatic Services.

The 2024 North Carolina gubernatorial election will be held on November 5, 2024, to elect the governor of North Carolina, concurrently with the 2024 U.S. presidential election, as well as elections to the United States Senate and elections to the United States House of Representatives and various state and local elections. Incumbent Democratic Governor Roy Cooper is term-limited and cannot seek re-election to a third consecutive term in office.