The North Pacific Coast Railroad (NPC) was a common carrier 3 ft (914 mm) narrow-gauge steam railroad begun in 1874 and sold in 1902 to new owners who renamed it the North Shore Railroad (California) (NSR) and which rebuilt the southern section into a standard-gauge electric railway.

The NPC operated in the northern California counties of Marin and Sonoma that carried redwood lumber, local dairy and agricultural products, express and passengers. The NPC operated almost 93 mi (150 km) of track that extended from a pier at Sausalito (which connected the line via ferry to San Francisco) and operated northwest to Duncans Mills and Cazadero (also known as Ingrams). The NPC became the North Shore Railroad (California) (NSR) on March 7, 1902. In 1907 the North Shore Railroad became part of the Northwestern Pacific Railroad (NWP). Southern portions of the line were standard gauged and electrified by the North Shore for suburban passenger service, though tracks north of Point Reyes Station remained 3 ft (914 mm) narrow gauge until abandonment in the late 1930s.

All of the NPC trackage has been abandoned either by the NPC or the NWP. Some of the original right of way can be seen at the Samuel P. Taylor State Park near Fairfax, along the shore of Tomales Bay and Keyes Estuary and passenger depots remain in San Anselmo, Duncans Mills and Point Reyes Station. One NPC steam locomotive, No.12 the "Sonoma," remains as a restored static exhibit in its circa 1870s appearance at the California State Railroad Museum in Sacramento, while Duncans Mills hosts some decaying cars that are not being restored. A flatcar, North Shore 1725, has been restored as a picnic car and operates at the Society for the Preservation of Carter Railroad Resources' Railroad Museum at Ardenwood in Fremont. The wooden water tank and a freight shed are maintained and in good condition at Freestone.

The NSR was operated by John Martin and Eugene de Sabla Jr., pioneers in the electric railroad business. The southern 23 miles (37 km) of line were modernized to allow operation of standard-gauge electric passenger cars in addition to narrow-gauge steam-powered freight trains. Electric cars sometimes shared dual-gauge tracks with the steam trains, while at other locations a separate track for the electric cars was constructed parallel to the narrow-gauge route. The line was ultimately double tracked from Sausalito to San Anselmo except for the tunnel at Alto. A power house was built at Alto and power was also purchased at San Rafael. Direct current electrical power was transmitted to the trains at 600 volts by a third rail (which was actually a fourth rail on the dual-gauge segments.) [25] Service started to Mill Valley on August 20, 1903, and to San Rafael on October 17, 1903. It was the first United States steam railroad electrified for operational efficiency rather than for smoke abatement. The railroad established practices later used in Grand Central Terminal and the interborough subways of New York City. [26] The electric lines were expanded after 1907 as part of the Northwestern Pacific Railroad. Interurban services ceased on February 28, 1941. [27] 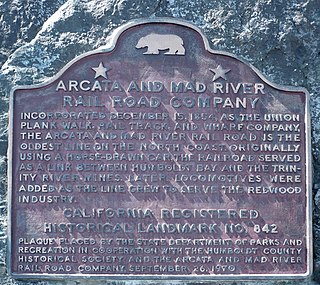 The Arcata and Mad River Railroad, founded in 1854, was the oldest working railroad in California. It operated on a unique narrow gauge until the 1940s when standard gauge rails were laid. Service ceased in 1983 due to landslides. It is California Historical Landmark #842. 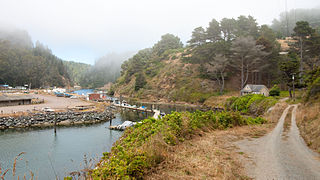 The Albion River is an 18.1-mile-long (29.1 km) river in Mendocino County, California. The river drains about 43 square miles (110 km2) on the Mendocino Coast and empties into the Pacific Ocean near the town of Albion, California, where California State Route 1 crosses it on the Albion River Bridge. The river's overall direction is east to west, but it moves significantly in the north-south direction. The tributaries of the river include Railroad Gulch, Pleasant Valley Creek, Duck Pond Gulch, South Fork Albion River, Tom Bell Creek, North Fork Albion River, and Marsh Creek. The river's most inland point is only 15 miles (24 km) from the coast, and its highest elevation is about 1,570 feet (480 m) above sea level. There is a large estuary at the mouth of the river, and tidal waters travel up to 5 miles (8 km) upstream. The Albion River was previously used to power a sawmill on the river mouth, but there are no major dams or reservoirs on the river. The river provides recreation, groundwater recharge and industrial water supply for the community of Albion, and wildlife habitat including cold freshwater habitat for fish migration and spawning. 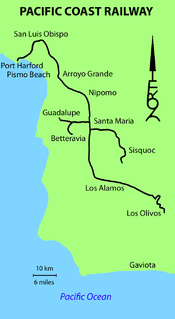 The Pacific Coast Railway was a 3 ft narrow gauge railway on the Central Coast of California. The original 10-mile (16 km) link from San Luis Obispo to Avila Beach and Port Harford was later built southward to Santa Maria and Los Olivos, with branches to Sisquoc and Guadalupe. 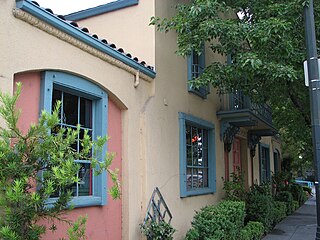 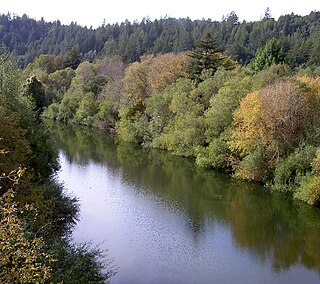 Austin Creek is a 16.0-mile-long (25.7 km) southward-flowing stream in the mountains of western Sonoma County, California which empties into the Russian River about 4 miles (6 km) from the Pacific Ocean.

San Francisco and North Pacific Railroad (SF&NP) provided the first extensive standard gauge rail service to Sonoma County and became the southern end of the regional Northwestern Pacific Railroad. Although first conceived of by Asbury Harpending, who had even obtained many of the right of ways, the SF & NP was bought and subsequently constructed by Peter Donahue, who drove the first spike on August 30, 1869. 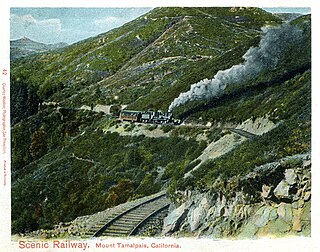 The Mount Tamalpais & Muir Woods Railway was a scenic tourist railway operating between Mill Valley and the east peak of Mount Tamalpais in Marin County, California, covering a distance of 8.19 miles (13.18 km), with a 2.88-mile (4.63 km) spur line to the Muir Woods. The railroad was incorporated in January 1896, and closed in the summer of 1930. Originally planned as a 4 ft 8 1⁄2 instandard gauge electric trolley line, the railroad was powered by a succession of geared steam locomotives. Billed as the "Crookedest Railroad in the World," the line was renowned for its steep and serpentine route, winding through picturesque terrain to a mountaintop tavern providing first-class hospitality and panoramic views of the San Francisco Bay Area. Despite its popularity, the railway met its demise following a fire in 1929, and dwindling ridership when the automobile could finally drive to Tamalpais' summit.

The Fort Bragg and Southeastern Railroad was formed by Atchison, Topeka and Santa Fe Railway as a consolidation of logging railways extending inland from Albion, California on the coast of Mendocino County. The railroad and its predecessors operated from 1 August 1885 to 16 January 1930. The line was merged into the regional Northwestern Pacific Railroad in 1907; but planned physical connection was never completed.

Southern Pacific Transportation Company formed the Oregon and Eureka Railroad in 1903 in an agreement to use logging railroads as part of a line connecting Humboldt County (California) sawmills with the national rail network. Northwestern Pacific Railroad offered service over the route from 1911 through 1933. The northern 6-mile (9.7 km) of the line remained in use as a Hammond Lumber Company logging branch until 1948. 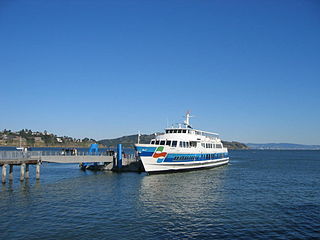 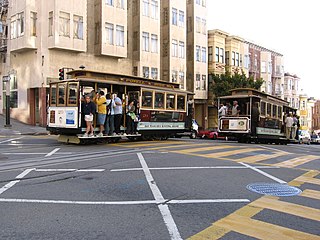 Carter Brothers manufactured railroad cars in northern California during the late 19th century. The firm was founded in 1872 by two Irish carriage-makers who moved to California during the American Civil War. Their cars built more than a century earlier were used into the 21st century on the San Francisco cable car system and the White Pass and Yukon Route.