The Northwest Line (Danish: Nordvestbanen), also referred to as the Kalundborg Line (Danish: Kalundborgbanen), is a 79.3 km (49.3 mi) long, state-owned single track passenger railway line between Roskilde and Kalundborg in the western part of the island of Zealand. The railway is owned by Banedanmark and the service is operated by DSB between Copenhagen Central Station and Kalundborg. [1]

DSB, an abbreviation of Danske Statsbaner, is the largest Danish train operating company, and the largest in Scandinavia. While DSB is responsible for passenger train operation on most of the Danish railways, goods transport and railway maintenance are outside its scope. DSB runs a commuter rail system, called the S-train, in the area around the Danish capital, Copenhagen, that connects the different areas and suburbs in the greater metropolitan area. DSB used to operate some trains in Sweden, but has since August 2017 lost all their contracts. 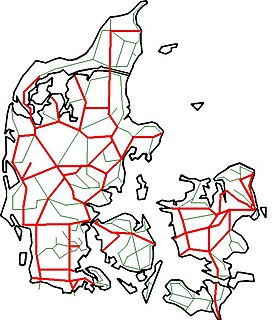 The history of rail transport in Denmark began in 1847 with the opening of a railway line between Copenhagen and Roskilde. The Kiel-Altona line in Holstein was completed three years earlier, but the region was later lost to the German Confederation in the Second War of Schleswig.

The rail transport system in Denmark consists of 2,633 km of railway lines, of which the Copenhagen S-train network, the main line Helsingør-Copenhagen-Padborg, and the Lunderskov-Esbjerg line are electrified. Most traffic is passenger trains, although there is considerable transit goods traffic between Sweden and Germany. 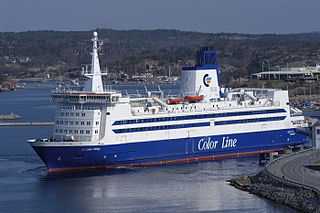 MS Color Viking is a ferry owned by the Norway-based Color Line, operated on their service between Sandefjord and Strömstad. She was built in 1985 as MS Peder Paars by Nakskov Skibsværft, Nakskov, Denmark for DSB Færger. Between 1991 and 2000 she sailed as MS Stena Invicta for Sealink Stena Line and Stena Line. In 1998 she was chartered to Silja Line under the marketing name MS Wasa Jubilee. In May 2000 the Stena Invicta started operating for Color Line and received her current name.

Nørreport Station is an S-train, metro and main line railway station in Copenhagen, Denmark. It is located in the district of Indre By, and is named after the historic Nørreport city gate, near the original location. It is one of the busiest railway station in Denmark, serving 165,000 people daily. The entire station is underground, with three pairs of platforms: one for S-trains, one for main line trains and one for the metro. The station is located on the Boulevard Line of the S-train and main line network. Several bus lines run through and start from Nørreport above ground. 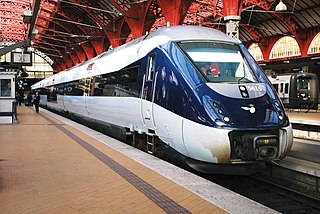 The IC4 is an inter-city rail train built by the Italian train manufacturer AnsaldoBreda for the trans-Great Belt routes of Danske Statsbaner (DSB), Denmark's national railway operator. Under DSB's 'Good trains for everyone' plan, the intent of the IC4 project was to replace several types of outdated rolling stock. However, various delays and shortcomings have turned the project into a major political issue.

The DSB Class EA was the first electric locomotive in Denmark, introduced in 1984. In total, 22 units were built for the DSB, about half were acquired by Deutsche Bahn in 2001 when it took over the freight business of DSB. 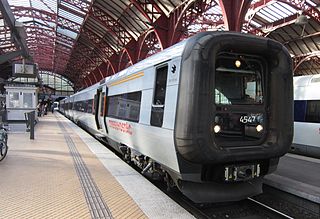 Øresundståg is a passenger train network operated by DSB and Transdev in the transnational Øresund Region of Denmark and Sweden. The name is a hybrid of the Danish Øresundstog and the Swedish Öresundståg, both meaning "Øresund train". The rolling stock, also known as Class ET in Denmark and X31K or X32K in Sweden, are electric passenger trainsets in the Flexliner family. The maximum speed is 180 km/h. 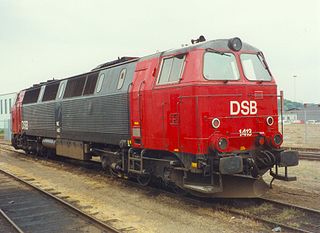 DSB class MZ was a series of 61 diesel-electric locomotives operated by Danske Statsbaner. They were built by NOHAB between 1967 and 1978 under licence from General Motors EMD with subcontractors Thrige-Titan and Frichs. There were four series of the locomotive built, designated I - IV.

The F class was a type of steam locomotive used by Swedish State Railways and based on the Württemberg C. Eleven locos were built by Nydquist & Holm (NOHAB) between 1914 and 1916. It was primarily used on the main lines between Stockholm-Gothenburg and Stockholm-Malmö. It is one of the largest steam locomotives ever used in Sweden.

The Vigerslev train crash occurred on 1 November 1919, when an express train collided at speed with a stopped train near Vigerslev, Denmark, due to a dispatcher error. 40 people were killed and about 60 injured.

Sølvgade Barracks is a former military facility from 1771 located on the corner of Sølvgade and Øster Voldgade in central Copenhagen, Denmark. The barracks closed in 1926 and the large Baroque complex designed by Nicolas-Henri Jardin then served as headquarters for DSB, the Danish state railways, until 2013, when the building was converted into student apartments. 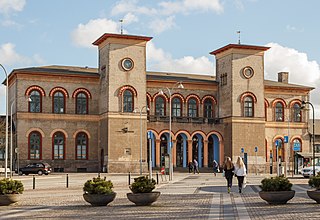 Roskilde Station is the principal railway station serving the city of Roskilde, Denmark, situated on the Danish Main Line between Copenhagen and Jutland. The station is also a terminus for the Lille Syd Line which connects Roskilde to Næstved by way of Køge, and the Nordvest Line to Kalundborg.

The first high-speed railway in Denmark was the Copenhagen–Ringsted Line, completed in late 2018 and opened in 2019. Further high-speed lines are currently under planning.

DSB Øresund was a Danish railway company which was the successor of what was left of DSBFirst Denmark. DSB Øresund operated train services on the tendered Coast Line and half of the train services between Copenhagen Central Station and Malmö via the Øresund Bridge. The other half of the cross-border service was operated by Transdev. On 13 December 2015, DSB took over operation of all activities from DSB Orsund A/S.

The Helsingør–Helsingborg ferry route is a shipping route connecting Helsingør (Elsinore), Denmark and Helsingborg, Sweden across the northern, and narrowest part of the Øresund. Due to the short distance, which is less than 3 nautical miles, is it one of the world's busiest international car ferry routes, with around 70 daily departures from each harbour. The oldest-known written mention of the route dates to the German traveller Adam of Bremen in the 11th century, but it has likely been in use much longer. Before 1658, the route was a domestic Danish route. For several centuries, the route has been run regularly by various Danish shipping lines. Its significance grew during the 1950s, but since the inauguration of the Øresund Bridge in 2000, at the southern end of the Øresund, it has lost some significance but remains as one of the world's most important ferry routes, particularly as a cheaper alternative to the bridge tolls. Since 1952, passports have not been required for Scandinavian and Finnish citizens.