Nottinghamshire ( /ˈnɒtɪŋəmʃər,-ʃɪər/ ; [2] abbreviated Notts.) is a landlocked county in the East Midlands region of England,bordering South Yorkshire to the north-west,Lincolnshire to the east,Leicestershire to the south,and Derbyshire to the west. The traditional county town is Nottingham,though the county council is based at County Hall in West Bridgford in the borough of Rushcliffe,at a site facing Nottingham over the River Trent.

Nottinghamshire lies on the Roman Fosse Way, and there are Roman settlements in the county; for example at Mansfield, and forts such as at the Broxtowe Estate in Bilborough. The county was settled by Angles around the 5th century, and became part of the Kingdom, and later Earldom, of Mercia. However, there is evidence of Saxon settlement at the Broxtowe Estate, Oxton, near Nottingham, and Tuxford, east of Sherwood Forest. The name first occurs in 1016, but until 1568, the county was administratively united with Derbyshire, under a single Sheriff. In Norman times, the county developed malting and woollen industries. During the industrial revolution, the county held much needed minerals such as coal and iron ore, and had constructed some of the first experimental waggonways in the world; an example of this is the Wollaton wagonway of 1603–1616, which transported minerals from bell pitt mining areas at Strelley and Bilborough, this led to canals and railways being constructed in the county, and the lace and cotton industries grew. In the 18th and 19th centuries, mechanised deeper collieries opened, and mining became an important economic sector, though these declined after the 1984–85 miners' strike.

Until 1610, Nottinghamshire was divided into eight Wapentakes. Sometime between 1610 and 1719, they were reduced to six – Newark, Bassetlaw, Thurgarton, Rushcliffe, Broxtowe, and Bingham, some of these names still being used for the modern districts. Oswaldbeck was absorbed in Bassetlaw, of which it forms the North Clay division, and Lythe in Thurgarton.

Nottinghamshire is famous for its involvement with the legend of Robin Hood. This is also the reason for the numbers of tourists who visit places like Sherwood Forest, City of Nottingham, and the surrounding villages in Sherwood Forest. To reinforce the Robin Hood connection, the University of Nottingham in 2010 has begun the Nottingham Caves Survey, with the goal "to increase the tourist potential of these sites". The project "will use a 3D laser scanner to produce a three dimensional record of more than 450 sandstone caves around Nottingham". [4]

Nottinghamshire was mapped first by Christopher Saxton in 1576; the first fully surveyed map of the county was by John Chapman, who produced Chapman's Map of Nottinghamshire in 1774. [5] The map was the earliest printed map at a sufficiently useful scale (one statute mile to one inch) to provide basic information on village layout, and the existence of landscape features such as roads, milestones, tollbars, parkland, and mills.

Nottinghamshire, like Derbyshire, and South Yorkshire, sits on extensive coal measures, up to 900 metres (3,000 feet ) thick, and occurring largely in the north of the county. There is an oilfield near Eakring. These are overlaid by sandstones and limestones in the west, and clay in the east. [6] The north of the county is part of the Humberhead Levels lacustrine plain. The centre and south west of the county, around Sherwood Forest, features undulating hills with ancient oak woodland. Principal rivers are the Trent, Idle, Erewash, and Soar. The Trent, fed by the Soar, Erewash, and Idle, composed of many streams from Sherwood Forest, run through wide and flat valleys, merging at Misterton. A point just north of Newtonwood Lane, on the boundary with Derbyshire is the highest point in Nottinghamshire; at 205 metres (673 feet), [7] while Silverhill, a spoil heap left by the former Silverhill colliery, a man-made point often cited as the highest, reaches 204 metres (669 feet). The lowest is Peat Carr, east of Blaxton, at sea level; the Trent is tidal below Cromwell Lock. [8]

Nottinghamshire contains one green belt area, first drawn up from the 1950s. Completely encircling the Nottingham conurbation, it stretches for several miles into the surrounding districts, and extends into Derbyshire.

Local government is devolved to seven local borough and district councils. Ashfield is Ashfield Independents controlled; Bassetlaw, Gedling, and Mansfield are Labour controlled; while Broxtowe, Newark and Sherwood, and Rushcliffe are Conservative controlled.

The regional economy was traditionally based on industries such as coal mining in the Leen Valley, and manufacturing. Since the invention of the knitting frame by local William Lee, the county, in particular Nottingham, became synonymous with the lace industry. [13]

9,700 pupils took GCSEs in the Nottinghamshire LEA in 2007. The best results were from the West Bridgford School, closely followed by Rushcliffe Spencer Academy and the Minster School in Southwell. The lowest performing school was the Queen Elizabeth's Endowed School in Mansfield. In Nottingham, the best results came from the Trinity Catholic School and the Fernwood School in Wollaton.

Nottinghamshire is home to the Sherwood Forest, known for its association with the legend of Robin Hood. [16] [17]

Nottinghamshire contains the ancestral home of the poet Lord Byron, Newstead Abbey, which he sold in 1818. It is now owned by Nottingham City Council, and is open to the public. The acclaimed author D. H. Lawrence was from Eastwood in Nottinghamshire. Toton was the birthplace and home of English folk singer-songwriter Anne Briggs, well known for her song Black Waterside. The north of the county is also noteworthy for its connections with the Pilgrim Fathers. William Brewster, for example, came from the village of Scrooby, and was influenced by Richard Clyfton, who preached at Babworth.

Nottinghamshire County Cricket Club (NCCC) are a first class county cricket club who play at Trent Bridge in West Bridgford. They won the County Championship in 2010. The most successful football team within Nottinghamshire is Nottingham Forest, a Championship club that won the 1978 English championship, and followed it up with winning the 1979 and 1980 European Cup titles. Mansfield Town, a League Two side, and Notts County, currently (2020–2021 season) in the National League, are other professional teams from the area. Other notable sporting teams are the Nottingham Rugby Football Club, and the Nottingham Panthers Ice Hockey Club.

In 2002, Crocus nudiflorus (Autumn crocus) was voted by the public as the county flower of Nottinghamshire. [19] [20]

The traditional county town, and the largest settlement in the historic and ceremonial county boundaries, is the City of Nottingham. The city is now administratively independent, but suburbs including Arnold, Carlton, West Bridgford, Beeston, and Stapleford are still within the administrative county, and West Bridgford is now home of the county council.

There are several market towns in the county. Newark-on-Trent is a bridging point of the Fosse Way and River Trent, but is actually an Anglo-Saxon market town with a now ruined castle. Mansfield, the second-largest settlement in the county after Nottingham, sits on the site of a Roman settlement, but grew after the Norman Conquest. Worksop, in the north of the county, is also an Anglo-Saxon market town which grew rapidly in the industrial revolution, with the arrival of canals and railways and the discovery of coal. Other market towns include Arnold, Bingham, Hucknall, Kirkby-in-Ashfield, Retford and Sutton-in-Ashfield.

The main railway in the county is the Midland Main Line, which links London to Sheffield via Nottingham. The Robin Hood Line between Nottingham and Worksop serves several villages in the county. The East Coast Main Line from London to Doncaster, Leeds, York, Newcastle upon Tyne, and Scotland serves the eastern Nottinghamshire towns of Newark and Retford.

The M1 motorway runs through the county, connecting Nottingham to London, Leeds, and Leicester by road. The A1 road follows for the most part the path of the Great North Road, although in places it diverges from the historic route where towns have been bypassed. Retford was by-passed in 1961, and Newark-on-Trent was by-passed in 1964, and the A1 now runs between Retford and Worksop past the village of Ranby. Many historic coaching inns can still be seen along the traditional route.

East Midlands Airport is just outside the county in Leicestershire, while Doncaster Sheffield Airport lies within the historic boundaries of Nottinghamshire. These airports serve the county and several of its neighbours. Together, the airports have services to most major European destinations, and East Midlands Airport now also has services to North America and the Caribbean. As well as local bus services throughout the county, Nottingham and its suburbs have a tram system, Nottingham Express Transit.

Nottingham and its surrounding areas form part of the Nottingham Urban Area while Bassetlaw is a non-constituent part of the Sheffield City Region.

The Nottingham Built-up Area (BUA), Nottingham Urban Area, or Greater Nottingham is an area of land defined by the Office for National Statistics as which is built upon, with nearby areas linked if within 200 metres - see the List of urban areas in the United Kingdom article for a broader definition. It consists of the city of Nottingham and the adjoining urban areas of Nottinghamshire and Derbyshire, in the East Midlands of England. It had a total population of 729,977 at the time of the 2011 census. This was an increase of almost 10% since the 2001 census recorded population of 666,358, due to population increases, reductions and several new sub-divisions.

Nottingham Shire is a county that is situated in the East Midlands of England. The county has history within Palaeolithic period, dating anywhere between 500,000 and 10,000 b.c.e., as well as early Anglo-Saxon communities, dating to 600 c.e. Furthermore, the county has significance in the political aspects of English history, particularly within intercommunal fighting, and its economics is historically centered around coal and textiles.

Newark is a constituency in Nottinghamshire, England. It is currently represented by Robert Jenrick of the Conservative Party who won the seat in a by-election on 5 June 2014, following the resignation of Patrick Mercer in April 2014. 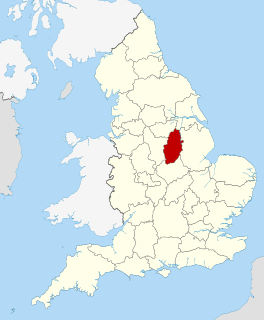 Rainworth is a village in the ceremonial county of Nottinghamshire in the East Midlands of England. It is split between the local government districts of Newark and Sherwood and Mansfield. 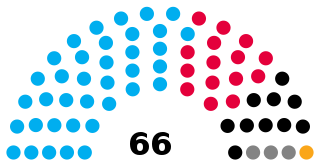 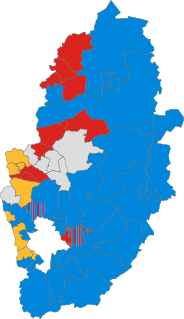 Elections to Nottinghamshire County Council took place on 4 June 2009, having been delayed from 7 May, in order to coincide with elections to the European Parliament.

Healthcare in Nottinghamshire is the responsibility of six clinical commissioning groups, covering Nottingham City, Nottingham North & East, Mansfield and Ashfield, Newark and Sherwood, Rushcliffe, and Nottingham West. They planned to merge in April 2020.

The Nottingham and Derby Green Belt is a green belt environmental and planning policy for the cities of Derby and Nottingham in the East Midlands region of England. It includes designated parts of several districts in the surrounding counties of Derbyshire and Nottinghamshire. Management is mainly performed by the local planning authority on guidance from central government.