The Nouveau Roman (French pronunciation: ​ [nuvo ʁɔmɑ̃] , "new novel") is a type of 1950s French novel that diverged from classical literary genres. Émile Henriot coined the term in an article in the popular French newspaper Le Monde on May 22, 1957 [1] to describe certain writers who experimented with style in each novel, creating an essentially new style each time. Most of the founding authors were published by Les Éditions de Minuit with the strong support of Jérôme Lindon.

Alain Robbe-Grillet, an influential theorist as well as writer of the Nouveau Roman, published a series of essays on the nature and future of the novel which were later collected in Pour un Nouveau Roman . Rejecting many of the established features of the novel to date, Robbe-Grillet regarded many earlier novelists as old-fashioned in their focus on plot, action, narrative, ideas, and character. Instead, he put forward a theory of the novel as focused on objects: the ideal nouveau roman would be an individual version and vision of things, subordinating plot and character to the details of the world rather than enlisting the world in their service. [2]

Despite the assertions of nouveauté, this vision of the novel can be construed as developing from earlier writers' suggestions and practice. Joris-Karl Huysmans, ninety years before, had suggested how the novel might be depersonalised;[ citation needed ] more recently, Franz Kafka had shown that conventional methods of depicting character were not essential; James Joyce had done the same for plot; and absurdist writers had engaged with some of the themes that preoccupied writers of the nouveau roman.

A group of writers dubbed Nouveaux Romanciers, "new novelists", appeared in the mid-1950s: Alain Robbe-Grillet, Claude Simon, Nathalie Sarraute, Michel Butor and Robert Pinget. The style had different approaches but generally rejected the traditional use of chronology, plot and character in fiction, as well as the omniscient narrator. The Nouveau Roman authors were open to influences from writers such as William Faulkner and the cinema. Both Robbe-Grillet and Marguerite Duras, whose 1958 novel Moderato cantabile was in the style of the Nouveau roman, also contributed to the French New Wave style of filmmaking. [3]

Alain Robbe-Grillet became an elected member of the Académie française on 25 March 2004, succeeding Maurice Rheims at seat No. 32. Claude Simon, the 1985 Nobel laureate in Literature, is often identified with the nouveau roman movement.

The nouveau roman literary movement and the novels themselves were mainly theorized by Jean Ricardou, [4] who, in addition to his well-known theoretical works — Problèmes du Nouveau roman (1967), Pour une théorie du Nouveau roman (1971), Le Nouveau roman (1973), Nouveaux Problèmes du roman (1978) — also published several nouveaux romans himself: L’Observatoire de Cannes (1961), La Prise de Constantinople (1965, Feneon prize for literature in 1966), Les Lieux-dits, petit guide d’un voyage dans le livre (1969). Besides his own writing, he organized, directed and published the acts of several conferences on the nouveau roman, including the famous 1971 conference and debate at Cerisy, published in two volumes: Nouveau roman : hier, aujourd’hui, indispensable for an understanding of the history of that important period of French literature. Just before his demise in 2016, he was working on a book of interviews with Amir Biglari, in which he provides a complete, precise and objective account of the nouveau roman movement.

Authors in the style of the Nouveau Roman

Other writers associated with the style of Nouveau Roman are:

The Nouveau Roman and the Left Bank

The Nouveau Roman style also left its mark on the screen as writers Marguerite Duras and Alain Robbe-Grillet became involved with the Left Bank film movement (often labelled as part of the French New Wave). Their collaboration with director Alain Resnais resulted in critical successes such as Hiroshima mon amour (1958) and Last Year in Marienbad (1961). They would later go on to direct their own films. [5] Influenced by these films French courses in North America during the 1960s and 1970s often included works by Nouveau Roman authors such as Alain Robbe-Grillet's La Jalousie (1957), Michel Butor's La Modification (1957), Nathalie Sarraute's Le Planetarium (1957) and Marguerite Duras' Moderato Cantabile (1958).

The Nouveau Roman in Quebec, Canada

The Nouveau Roman influenced French-language writers in Quebec such as Jacques Godbout and Gerard Bessette. The Canadian-born French writer Nancy Huston declared that she began writing in direct reaction to the stark style of the Nouveau Roman in Nord Perdu (1999). (See Joseph Pivato, nouveau roman)

Claude Simon was a French novelist, and the 1985 Nobel Laureate in Literature.

Nathalie Sarraute was a French writer and lawyer. 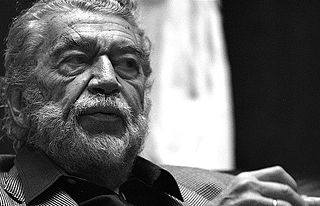 The Manifesto of the 121 was an open letter signed by 121 intellectuals and published on 6 September 1960 in the magazine Vérité-Liberté. It called on the French government, then headed by the Gaullist Michel Debré, and public opinion to recognise the Algerian War as a legitimate struggle for independence, denouncing the use of torture by the French army, and calling for French conscientious objectors to the conflict to be respected by the authorities.

Calder Publications is a publisher of books. Since 1949, the company has published many books on all the arts, particularly subjects such as opera and painting, the theatre and critical and philosophical theory. Calder's authors have achieved nineteen Nobel Literature Prizes and three for Peace.

La Jalousie (Jealousy) is a 1957 novel by Alain Robbe-Grillet. The French title: "la jalousie" is a play on words that can be translated as "jealousy", but also as "the jalousie window". The jealous husband in the novel spies on his wife through the Venetian blind-like slats of the jalousie windows of their home.

Jean Ricardou was a French writer and theorist. He joined the Tel Quel editorial board in 1962, writing for the review until 1971. Between 1961 and 1984 he published three novels, a collection of short stories, four books of critical theory and a "mix" of fiction and theory, whilst being the main theorist of the French New Novel literary movement before devoting his work, as of 1985, almost exclusively to the invention and development of a new science of writing: textics.

Alan Sheridan was an English author and translator.

Un siècle d'écrivains was a French series of television documentary films aired on France 3 between 1995 and 2001. A total of 257 documentaries were made, each focusing on a writer active during the 20th century. The series was initiated by France 3's program director Jean-Pierre Cottet in the spring of 1994. Each episode was independently produced by different production companies and directors, restricted to a running time of 52 minutes. The episodes were presented by Bernard Rapp. The series ended with a special episode about Antoine Chuquet, an imaginary writer made up by the producers.

The grand prix national des Lettres was created in 1950 by the French Ministry of Culture to recognize writers who have contributed to the influence of French literature. It has not been awarded since 1999.

Tropisms is an experimental novel by Nathalie Sarraute, first published in 1939. It is considered a forerunner of the Nouveau Roman. Jean Genet, Marguerite Duras and Jean-Paul Sartre all described it as a masterpiece.

Georges Lambrichs was a French writer, literary critic and editor.