Novi asistent ("New Assistant") is a 1964 Yugoslavian television series based on A. J. Cronin's stories about the fictional physician Dr. Finlay. The series was directed by Mirjana Samardžić and starred Dejan Dubajić, Ljiljana Jovanović, Nikola Simić, and Milan Srdoč. 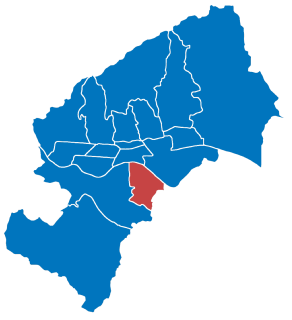 Novi Zagreb – istok is a district in Zagreb, Croatia. Within this district in the neighborhood of Travno lies Mamutica, which was built to be the largest communal housing block in southeast Europe. Mamutica towers above other blocks of flats so that the impression is given that it must be on a hill even though the entire area is a flat plain.

Novi Zagreb – zapad has the status of a city district in Zagreb, Croatia and as such has an elected council.

The Neoterikoi or Neoterics were a series of avant-garde Latin poets who wrote in the 1st century BC. Neoteric poets deliberately turned away from classical Homeric epic poetry. Rather than focusing on the feats of ancient heroes and gods, they propagated a new style of poetry through stories that operated on a smaller scale in themes and setting.

Novi Iskar is a town in Western Bulgaria, located in Sofia City Province, which is a part of the Municipality of Sofia. It is often regarded as a northern suburb of Bulgarian capital Sofia and lies in the northern part of the Sofia Valley, with the Iskar Gorge beginning just north of the town.

Sitniče is a village in the municipality of Novi Pazar based on west side of Novi Pazar. Most population is family Koca., Serbia & Montenegro.

Darko Šuškavčević is a Montenegrin retired football defender. Besides Montenegro, he has played in the Czech Republic and Greece.

Miroslav "Muta" Nikolić is a Serbian professional basketball coach and former player. He currently serves as a head coach for the Vojvodina of the Basketball League of Serbia.

Martin Poustka is a Czech football manager, who is currently working for Slavia Prague.

Branislav Ratkovica is a Serbian professional basketball coach and former player. He currently serves as a head coach for Metalac of the Basketball League of Serbia.

Rast is a village situated in Novi Pazar municipality in Serbia.

Šaronje is a village situated in Novi Pazar municipality in Serbia.

Academic ranks in the Czech Republic and in Slovakia are the titles, relative importance and power of professors, researchers, and administrative personnel held in academia.

Jiří Balcárek is a Czech football manager and former player. He played for Olomouc in the Czech First League and German side Union Berlin at club level and made two appareances for the Czech Republic national team.

Tim Burton Productions is an American film production company, founded by Tim Burton in the late 1980s. Denise Di Novi once headed the banner from 1989 to 1996. The company was not usually credited on films directed or produced by Burton.

Goran Topić is a Serbian professional basketball coach and scout, who is an assistant coach of FMP of the ABA League and the Basketball League of Serbia.

Teo Čizmić is a Croatian professional basketball coach and former player, currently serving as the sport director at KK Split.

Novi Sad Pride is annual pride parade held in Novi Sad, second largest city in Serbia and administrative center of Vojvodina organized to celebrate the lesbian, gay, bisexual, and transgender (LGBT) people and their allies. The event, attended by city officials and members of diplomatic missions in Serbia, was organized for the first time in May 2019 at the central Republic Square. Attended by around 200 people, 2019 pride was the first ever gay parade in Serbia to be held outside of Belgrade. The first pride was organized as the end event of the Pride Week in Novi Sad. It was organized on the International Day Against Homophobia, Transphobia and Biphobia.

Oto Brunegraf is a Slovak football manager. His last spell was with the Slovak national team as an assistant to Pavel Hapal with whom he also served on club level in Slovakia, Czech Republic and Poland. He managed the side for one match on caretaker basis in a 2–3 defeat versus Israel.