NuL /ˈnʌl/ is a South African band formed in 1998 by Adriaan Pelzer and Simon Kruger, operating as NuL since 2004. NuL creates Afrikaans EBM/Industrial music, and propagates the free distribution of their music. Apart from conventional CD sales, they distribute all of their music freely on the internet, licensed under the Creative Commons Attribution-Noncommercial-NoDerivs license. The music is seeded directly from their website. They also encourage fans on their website to pirate their CD [1] by making the CD artwork of their first CD available as free downloads.

When their highly avant-garde rock band, Nothing, broke up in 1998, Adriaan Pelzer and Simon Kruger started experimenting with computer music on a Pentium II 350 MHz, using mainly software like Fruity Loops and Cool Edit Pro, but also experimenting with the possibilities of music production on Linux-based systems. They were both based in Pretoria, South Africa at the time. Initially inspired by the works of Aphex Twin, Autechre and Squarepusher, they produced a number of Glitch-inspired pieces that were later to be released on the Een album.

When Simon moved to London in 2002, Adriaan continued the legacy, and developed the musical style into a more hard-edged, Industrial-influenced direction. Shortly after Simon's return to South Africa in 2004, Adriaan moved to Singapore, where he topped the development of the new, harder style with EBM influences. Here he founded the NuL website, where all of NuL's music is seeded from onto the Internet. In 2006 he returned to South Africa, and together with Simon, Dawid Kahts (Thys Nywerheid), and Adriaan's wife, actress Mareli Minnaar, formed the band, NuL, who are rapidly becoming known for their energetic live performances.

Later in 2006 the band was joined by Visual Artist Niel de Lange, who added a whole new dimension to NuL's live performance with live Video Mixing. In 2007 Gerrie Roos joined NuL as their permanent Sound Engineer, and Chris Erasmus became the seventh member of NuL, as their permanent lighting technician and videographer. After experimental videos made for Swart and Kaper, NuL filmed their first full-fledged Music Video of Online Superstar in the winter of 2008, with Erasmus operating the camera, de Lange as set designer, and Pelzer as Director. The Video featured none of the bandmembers themselves, but instead Dai Zaobab, internationally acclaimed firedancer and self-proclaimed Boabab Hunter. The video was launched on TV for the first time on the Afrikaans music channel, MK.

In 2007 NuL signed a distribution deal with OneF Records, [2] run by Paul Riekert of the first ever, hugely successful Afrikaans Industrial band, Battery9.

2009 saw an increase in activity for NuL following the launch of their third album, Drie, In June. 2009 also brought about some changes in the lineup with the departure of VJ Niel de Lange. The band, opting not to try and replace his artistry, compensated by focusing on introducing a more organic and dynamic feel to their live shows utilising videographer Chris Erasmus' phenomenal ability as a lighting technician.

The Afrikaner Broederbond (AB) or Broederbond was a secret, exclusively male and Afrikaner Calvinist organisation in South Africa dedicated to the advancement of Afrikaner interests. It was founded by H. J. Klopper, H. W. van der Merwe, D. H. C. du Plessis and Rev. Jozua Naudé in 1918 and was known as Jong Zuid Afrika until 1920, when it became the Broederbond. Its large influence within South African political and social life, came to a climax with the rise of apartheid, which was largely designed and implemented by Broederbond members. Between 1948 and 1994, many prominent figures of South African political life, including all leaders of the government, were members of the Afrikaner Broederbond. The Afrikaanse Hoër Seunskool also known as Affies, is a public Afrikaans medium high school for boys situated in the suburb of Arcadia in Pretoria in the Gauteng province of South Africa, It is one of the top and academic Afrikaans schools in South Africa. One of the best rugby schools in the country, they play against every all boys schools in the country. The school was founded in 1920 by Jan Joubert and Chris Neethling and the sister school is Afrikaanse Hoër Meisieskool.

The music of Namibia includes a number of folk styles, as well as pop, rock, reggae, jazz, house and hip hop.

7de Laan is a South African Afrikaans soap opera created by Charmaine Meintjies and produced by Danie Odendaal Productions. The series is set in and around the life of Charmaine Meintjies and her family as she manages crisiseses in Oppiekoffie The programme's dialogue is primarily in Afrikaans and is subtitled in English with some English and Zulu dialogue in between. The street and shopfronts which are featured on the opening visuals, are that of Seventh Street in Melville, Johannesburg.

Laurika Rauch, is a South African singer who performs in both Afrikaans and English. She had a hit single in 1979 with Kinders van die Wind, written by Koos du Plessis. The song featured prominently in the Afrikaans television series "Phoenix & Kie" in the late seventies. 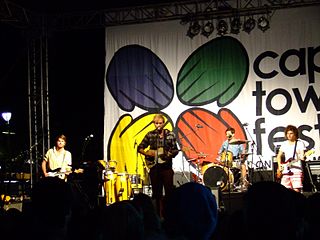 The Ghoema Music Awards are presented by the Ghoema Trust to recognize outstanding achievement in the Afrikaans Music Industry. It is the only independent music award ceremony of its genre in South Africa. The event was established in 2012. The ceremony is held in March every year and contenders are judged on performances made in the previous year. The show broadcasts on KykNET.

Francois Henning, better known by his stage name Snotkop ([ˈsnɔtkɔp], and previously known as Lekgoa[ləkˈχo̯a], is a South African singer and rapper of Afrikaans.

The Gothsicles is an American industrial and electronic body music (EBM) band formerly based out of Chicago, Illinois after moving to Boston, Massachusetts in 2018. The group was formed in Wisconsin in 2002 by Brian "darkNES" Graupner, who handles vocals and synthesizers, and is the sole consistent member. The band has a rotating lineup of live musicians, including Matt Fanale of Caustic, Matt Slegel of Angelspit, and David Dodson of Abstinence. The band released its first LP, NESferatu, in 2006. Following albums included Sega Lugosi's Dead (2009), Industrialites & Magic (2011), Squid Icarus (2014), and I Feel Sicle, which was released on November 4, 2016. According to COMA Music Magazine, "The Gothsicles are one of the forerunners in Industrial Music for the Nerdy Masses."

Cold Therapy is an Dark-industrial / dark electronic music project from Poland, founded by Jacek Wolański in October 8, 2012. Music of Cold Therapy is known for its dark and atmospheric sound - "A soundtrack to the dark side of your mind”.