Balgimbayev was a graduate of the Kazakh Polytechnic Institute. [1] [2]

From 1973 to 1986, Nurlan Balgimbayev worked in the oil industry, beginning as chief engineer of oil refinery Zhaikneft. In 1986, he was hired by the Soviet ministry of oil and gas. With the fall of the Russian block in 1991, Balgimbayev left for the US and studied one year at the University of Massachusetts and made a one-year internship at Chevron (1993-1994).

Until 1997, he held different minister and vice-minister positions in the Kazakh government. From October 1994 to March 1997, Nurlan Balgimbayev was Minister of Oil and Gas. From March to October 1997, he was the president of KazakhOil (see Tengizchevroil). [3] [4]

On 10 October 1997, he was named Prime Minister of Kazakhstan and remained in office up until 1 October 1999. [2] The choice for Balgimbayev was motivated by the following factors: the former Prime minister Akezhan Kazhegeldin was privatizing the oil and gas sector too fast and loose, Balgimbayev was already in talks with Russians for a major Caspian pipeline, and he was an IMF-sceptic like the President Nazarbayev. [5] Balgimbayev's plan was also to increase the production of Kazakh oil from 23 million tons to 170 million annually. [6] In 1998, he favored the sale of 40% of Tengiz oilfields to Chevron. [4]

After his tenure as PM, he continued his career as President at state-owned KazakhOil from 1999 to 2002. Lyazzat Kiyinov replaced him after the merger between KazakhOil and Transport Nefti i Gaza companies into the new KazMunayGas. [7] In December 2007, he was appointed adviser to the President. [3] From 2002 to 2007, he managed his own company, the Kazakhstan Oil Investment Company. Since December 2009, Nurlan Balgimbayev had been the director general of a joint venture between KMG and Eni. [4]

In 2003, the US justice linked Nurlan Balgimbayev to a $78 million bribe from US oil consultant James Giffen. [8] [9] [10] Nurlan Balgimbayev was also involved in a bribery case led by oil-industry fixer Friedhelm Eronat. [11] Coined as the Kazakhgate, the case implied the use of bribe money for luxury items and premium education fees in Switzerland. [4]

The economy of Kazakhstan is the largest in Central Asia in both absolute and per capita terms, but the currency saw a sharp depreciation between 2013 and 2016. It possesses oil reserves as well as minerals and metals. It also has considerable agricultural potential, with its vast steppe lands accommodating both livestock and grain production. The mountains in the south are important for apples and walnuts; both species grow wild there. Kazakhstan's industrial sector rests on the extraction and processing of these natural resources.

Nursultan Abishuly Nazarbayev or Nursultan Abishevich Nazarbayev is a Kazakh politician currently serving as the Chairman of the Security Council of Kazakhstan since August 1991 who previously served as the first President of Kazakhstan, in office from 24 April 1990 until his formal resignation on 20 March 2019. He is one of the longest-ruling non-royal leaders in the world, having ruled Kazakhstan for nearly three decades. He was named First Secretary of the Communist Party of the Kazakh SSR in 1989 and was elected as the nation's first president following its independence from the Soviet Union. He holds the title Elbasy. 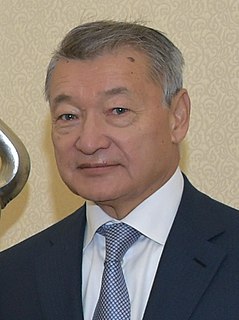 Daniyal Kenjetaiuly Akhmetov is a Kazakh politician who was the 6th Prime Minister of Kazakhstan from 13 June 2003 to 9 January 2007.

Tengiz field is an oil field located in northwestern Kazakhstan's low-lying wetlands along the northeast shores of the Caspian Sea. It covers a 2,500 km2 (970 sq mi) project license area which also includes a smaller Korolev field as well as several exploratory prospects.

Serik Nyghmetuly Akhmetov was a Prime Minister of Kazakhstan from 2012 to 2014. He served as the Minister of Defense from April to October 2014.

Erbolat Askarbekuly Dosaev is a Kazakh politician who served as a Deputy Prime Minister from 29 August 2017 to 25 February 2019. He served as the Minister of Finance from 16 June 2003 head of the Agency for Regulating Natural Monopolies, and later as the Health Minister. In January 2013, Dosaev was appointed head of a reorganized Minister of National Economy.

Karim Qajymqanuly Massimov is a Kazakh politician who served as a Prime Minister of Kazakhstan from 10 January 2007 to 24 September 2012 and again from 2 April 2014 to 8 September 2016.

Kazakhstan owns large reserves of energy resources, and therefore the energy policy of Kazakhstan has influence over the world's overall energy supply. Although Kazakhstan has not described itself as an energy superpower, Kazakhstan's former president Nursultan Nazarbayev has claimed Kazakhstan will become a factor of energy security in Asia and Europe. Kazakhstan has a strategic geographical location to control oil and gas flows from Central Asia to East (China) and West.

The Order of Kurmet or the Order of Honour is an order awarded by the government of Kazakhstan since 1993. It is awarded to citizens of Kazakhstan who have exhibited merit in the fields of economics, science, culture, social issues, and education. The order has no grades or classes.

Sauat Mukhametbayuly Mynbayev is a Kazakh politician who served as the minister of oil and gas of Kazakhstan from 2010 to 2013. He is currently the CEO of Kazakhstan Temir zholy.

The Ministry of Healthcare is one of the central executive bodies of the cabinet-level ministry in Kazakhstan. It carries out management, as well as, within the limits provided for by law, intersectoral coordination in the field of public health, medical and pharmaceutical education. On 6 August 2014, it was reorganized into the Ministry of Health and Social Development by a decree of the President of Kazakhstan “On Reform of the Public Administration of the Republic of Kazakhstan”. But was later reestablished on 25 January 2017. It is the highest government department responsible for health. 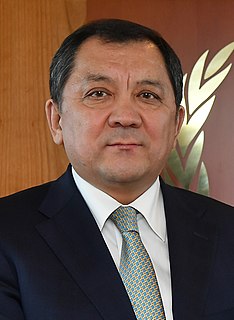 Nurlan Asqaryly Nogaev is Kazakh politician who served as Minister of Energy from 18 December 2019 under Askar Mamin's cabinet until 7 September 2021, when he was transferred to the post of äkım of Mangystau Region. Prior before becoming an Energy Minister, he was the äkım of West Kazakhstan and Atyrau regions from 2012 to 2019. 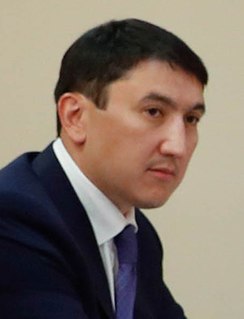 Magzum Maratuly Myrzagaliev is a Kazakh politician who's serving as the Minister of Energy since 9 September 2021. Prior to that, he was the Minister of Ecology, Geology and Natural Resources from 2019 and in the ministry as Vice after working in engineering and managing national company businesses.