Nurnaningsih was born on 5 December 1925, at Darmo Hospital in Surabaya, Dutch East Indies, to Raden Nganten Soekini Martindjung and Raden Kadjat Kartodarmodjo. [2] She was the second child from the eighth children, her brothers were Hemoko, Daryono and Prawito. [2] While her sisters were Nurpeni, Nurkeni, Nureti, and Nurbarti. [2] Her father was the descendant of Sultan Agung of Mataram, while her mother was the descendant of Prabu Brawijaya V. [2] Nurnaningsih dropped out of school in the first year of senior high school. She made her feature film debut in 1953 with Usmar Ismail's Krisis (Crisis). [3] [4] The comedy was the most successful film since Terang Boelan in 1937. [5]

In D. Djajakusuma's 1954 film Harimau Tjampa (Tiger from Tjampa) she appeared half nude aka lingerie model, [1] making her the first native Indonesian actress in such a role. [4] This occurred during a period of contention between artists and the censorship board. [6] She later told the press: "I am not ruining art. I'm breaking away the old views of art that are still held in Indonesia." [lower-alpha 1] [4] She released another film, Klenting Kuning, later that year. [3]

In mid-1954 nude pictures of Nurnaningsih by an unknown photographer began circulating in Jakarta. This resulted in her being brought in for questioning by the Jakarta police in early October, while the prosecutor's office also expressed an interest in the case. [7] The general populace was outraged at the pictures, which they considered to be against Eastern values, and Nurnaningsih's films were boycotted in East Kalimantan. [8] She released one film in 1955, Kebun Binatang (Zoo), before disappearing from the spotlight. [3]

Nurnaningsih wandered the Indonesian archipelago for twelve years, taking odd jobs as a sketch artist, stage performer, English and Dutch language teacher, seamstress, pianist, singer, and – for six years – a football goalkeeper. [9] She returned to film in 1968 with a bit part in Djakarta, Hongkong, Macao. After several more bit parts, she headlined in Seribu Janji Kumenanti (A Thousand Promises I Await) in 1972. She continued taking roles in the 1980s. [3]

Nurnaningsih is a Evangelicalism faith, [10] she was married and divorced twelve times. [11] Nurnaningsih was first married to painter artist Kartono Yudhokusumo (18 December 1924 – 11 July 1957) on 1945, at the age of 18. They had a two children named Karti Yudaningsih and Raden Julius Hargowo Bintoro. [12] After they divorced in 1952, Nurnaningsih married for second time in April 1955, she married a former lieutenant named Basir Ibrahim. [12] They had a daughter named Maria Nina Zunaria, The couple were divorced one year after their daughter was born. [12] During an interview, Nurnaningsih said her second husband motive for marrying her is nothing more than just wanted to taking advantage of her popularity. [12] During her trip to Ternate, she met and married her third husband Yan Karel Thomas, they divorced. [2] After divorced, Nurnaningsih gave birth to her youngest son Yanto Ganggono, She is also had been gifted a house by Bung Karno. [2]

Nurnaningsih said she was inspired to became a movie star when she saw a movie played by Miss Roekiah, at the age of 14. [2]

By the end of 1990s, Nurnaningsih suffered from Paralysis and Diabetes mellitus. [12]

Nurnaningsih died at her third daughter residence in Tebet, South Jakarta, on 21 March 2004. She was buried at Menteng Pulo Cemetery, in South Jakarta. [12] 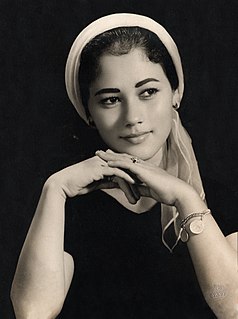 Suzzanna Martha Frederika van Osch, was an Indonesian actress. Known as the "horror queen of Indonesian cinema", she is well known in particular in Indonesia for portraying spirits, witches, and other supernatural beings. She was crowned the best female antagonist in Indonesian film industry along with Ruth Pelupessy and Mieke Wijaya.

Prisia Wulansari Nasution or better known as Prisia Nasution is an Indonesian actress, model and martial artist of mixed Javanese and Batak descent.

Slamet Rahardjo Djarot or better known as Slamet Rahardjo is an Indonesian actor, director, and screenwriter of Javanese descent. He is the elder brother of director, songwriter, and politician, Eros Djarot. Since his directorial debut in 1979 with Rembulan dan Matahari, he has directed and/or written twelve films; one of which, Langitku, Rumahku, was Indonesia's submission to the 63rd Academy Awards in 1991. 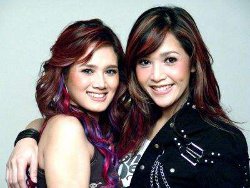 Ratu was an Indonesian music duo formed in 1999 with Maia Estianty, then the wife of musician Ahmad Dhani, on instruments and Pinkan Mambo on vocals. Ratu entered the Indonesian musical scene with their first album, Bersama. After a short break caused by Mambo's departure in 2004, the group formed anew with Mulan Kwok as vocalist. This new line-up proved more successful, with their most successful songs – "Teman Tapi Mesra" and "Lelaki Buaya Darat" ("Womaniser") – released in this period; both song titles later became common terms in the Indonesian vocabulary. The group's second studio album, No. Satu, sold 200,000 copies on the day of its release, a record for an album by an Indonesian female group. The group dissolved in 2007.

Pinkan Ratnasari Mambo, also known as Pinkan Mambo, is an Indonesian pop singer. She achieved success as the vocalist in the Indonesian music duo Ratu between 2000 and 2004, then continued her career as a soloist.

Alang-Alang is a 1939 film from the Dutch East Indies. Starring Mohamad Mochtar and Hadidjah, it follows a young man in his quest to rescue his love from a bandit. Inspired by the Tarzan film series and shot in a period of one month with borrowed animals, the film was a commercial success and credited as a factor in the solidification of the Indies' film industry, as well as helping jump start the Malaysian and Singaporean ones. 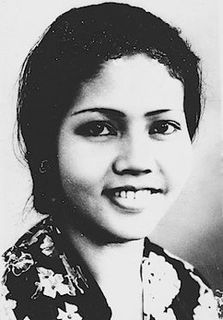 Roekiah, often credited as Miss Roekiah, was an Indonesian kroncong singer and film actress. The daughter of two stage performers, she began her career at the age of seven; by 1932 she had become well known in Batavia, Dutch East Indies, as a singer and stage actress. Around this time she met Kartolo, whom she married in 1934. The two acted in the 1937 hit film Terang Boelan, in which Roekiah and Rd Mochtar played young lovers. 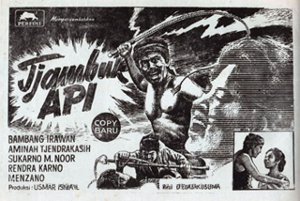 Roekihati is a 1940 film from the Dutch East Indies. Directed by the brothers Joshua and Othniel Wong and produced by Tan's Film, it follows a young village woman who goes to the city and encounters various difficulties. Targeted at lower-class audiences, it was shot in black-and-white and starred Roekiah and Raden Djoemala. 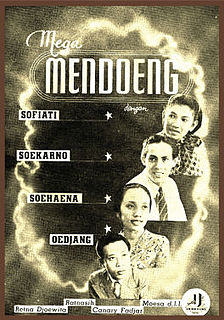 Mega Mendoeng is a black-and-white drama film from the Dutch East Indies directed by Boen Kin Nam and produced by Ang Hock Liem for Union Films. Starring Rd Soekarno, Oedjang, Boen Sofiati, and Soehaena, it follows two young lovers who are separated by lies but ultimately reunite at the village of Mega Mendoeng in Bogor. This film, Union's seventh and final production, was shot concurrently with Soeara Berbisa and completed over a period of three months. It was released in early 1942 and screened as late as July of that year, but may now be lost. 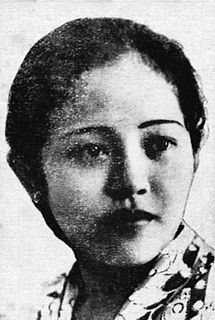 Hadidjah was an Indonesian film actress best known for partnership with Moh Mochtar in seven films released by Java Industrial Film between 1939 and 1941. She was the mother of Citra Award-winning musician Idris Sardi.

Baturraden is a district in the Banyumas Regency on the slope of Mount Slamet, Central Java, Indonesia. It features panoramic views, waterfalls, a mini-train, paddleboats, a water slide, and a pool. Its name is derived from a legend about star-crossed lovers, a manservant (Batur) and noblewoman (Raden).

Kanjeng Raden Ayu Soemarini Soerjosoemarno, now known as Marini Abdullah Burhan or simply Marini or Marini Sardi is an Indonesian singer and actress who has performed on stage and TV screens since the 1960s. She was born to Indonesian father Kanjeng Raden Mas Arjo Soetarjo Soerjosoemarno and Dutch mother Dolly Zegerius. She has recorded dozens of albums, both recorded in Indonesia and abroad for Polydor, Philips and EMI. 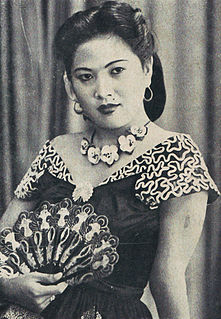 Raden Ajeng Titien Sumarni was an Indonesian actress active in the 1950s. Born in Surabaya, she moved to Tasikmalaya as a child and developed an interest in stage acting, trained by her uncle and future husband Mustari, later acting for republican troops during the Indonesian National Revolution. Sumarni began acting in film in 1951, making her debut with Seruni Laju. Over her five-year career Sumarni acted in thirty films, established her own film production company, and became one of the most popular Indonesian actresses of her time. Following her final film, Djandjiku (1956), Sumarni fell out of the spotlight, eventually dying at very young age. 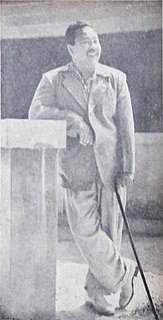 S. Poniman was an Indonesian kroncong singer and comic actor. Born in Banda Aceh in 1910, he took up singing and made his way to Batavia. In 1940 he made his debut as music director and actor on the film Kedok Ketawa, completing three further productions before the Japanese occupation brought film production to a near-standstill. Poniman spent time as a soldier and truck driver before returning to the film industry in 1951, after Indonesia's independence, as a star of Dunia Gila. Between 1951 and 1958 he appeared in more than twenty films before leaving the struggling industry to become a trader. Though he appeared in several further films before his death, Poniman never regained his stardom.

Selamat Berdjuang, Masku! is a 1951 Indonesian film directed by R.H. Andjar Subyanto and starring Raden Sukarno and Marlia Hardi. It follows a former guerrilla leader who must pursue his love despite the interference of his former comrades.

Marlia Hardi was an Indonesian film actress active from 1951 to 1983. Born in the Central Javan city of Magelang, she took to the stage in the 1940s before moving to Jakarta in 1949. Two years later she made her feature film debut in Untuk Sang Merah Putih. Over the next two decades she appeared in over seventy films, became recognized for her depictions of mothers, and received the Citra Award for Best Supporting Actress. Despite her productiveness, however, she sank into debt and committed suicide at the age of fifty-seven. 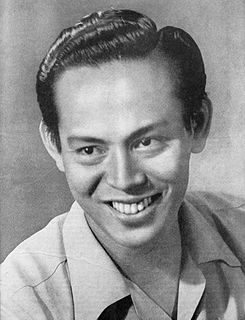 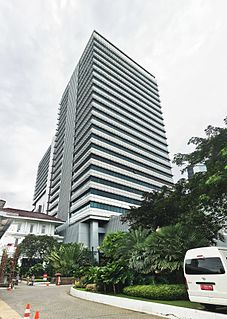 Wikimedia Commons has media related to Nurnaningsih .
This page is based on this Wikipedia article
Text is available under the CC BY-SA 4.0 license; additional terms may apply.
Images, videos and audio are available under their respective licenses.