Last updated March 29, 2020
Greek and Roman mythological creature
This article is about the creatures of Greek mythology. For other uses, see Nymph (disambiguation).

A nymph (Greek : νύμφη, nýmphē; Ancient: [nýmpʰɛː] , Modern: [nímfi] ) in ancient Greek folklore is a supernatural being associated with many other minor female deities that are often associated with the air, seas, woods, water or particular locations or landforms. Different from Greek goddesses, nymphs are generally regarded as divine spirits who animate or maintain Nature (natural forces reified and considered as a sentient being) for the environments where they live, and are usually depicted as beautiful, young, and graceful maidens. They were not necessarily immortal, but lived many years before they died. [1]

They are often divided into various broad subgroups, such as the Meliae (nymphs of ash trees), the Naiads (nymphs of rivers and streams), the Nereids (nymphs of calm seas), and the Oreads (nymphs of mountains). [2]

Nymphs often feature in many classic works of art, literature, mythology and in fiction. Since medieval times, nymphs are sometimes popularly associated, or even confused, with the mythical or spiritual fairies.

The Greek word νύμφη has the primary meaning of "young woman; bride, young wife" but is not usually associated with deities in particular. Yet the etymology of the noun νύμφη remains uncertain. The Doric and Aeolic (Homeric) form is νύμφα.

Modern usage more often applies to young women at the peak of their attractiveness, contrasting with parthenos (παρθένος) "a virgin (of any age)", and generically as kore (κόρη < κόρϝα) "maiden, girl". The term is sometimes used by (human) women to address each other and remains the regular Modern Greek term for "bride".

Nymphs were sometimes beloved by many and dwell in most specific areas related to the natural environment. e.g. mountainous regions and forests by springs or rivers. Other nymphs, mostly appeared in the shape of young maidens, were part of the retinue of a god, such as Dionysus, Hermes, or Pan, or a goddess, generally the huntress Artemis. [3]

The Greek nymphs were also spirits invariably bound to places, not unlike the Latin genius loci , and sometimes this produced complicated myths like cult of Arethusa to Sicily. In some of the works of the Greek-educated Latin poets, the nymphs gradually absorbed into their ranks the indigenous Italian divinities of springs and streams (Juturna, Egeria, Carmentis, Fontus), while the Lymphae (originally Lumpae), Italian water-goddesses, owing to the accidental similarity of their names, could be identified with the Greek Nymphae. The classical mythologies of the Roman poets were unlikely to have affected the rites and cults of individual nymphs venerated by country people in the springs and clefts of Latium. Among the Roman literate class, their sphere of influence was restricted, and they appear almost exclusively as divinities of the watery element.[ citation needed ]

The ancient Greek belief in nymphs survived in many parts of the country into the early years of the twentieth century, when they were usually known as "nereids". [4] Often nymphs tended to frequent areas distant from humans but could be encountered by lone travelers outside the village, where their music might be heard, and the traveler could spy on their dancing or bathing in a stream or pool, either during the noon heat or in the middle of the night. They might appear in a whirlwind. Such encounters could be dangerous, bringing dumbness, besotted infatuation, madness or stroke to the unfortunate human. When parents believed their child to be nereid-struck, they would pray to Saint Artemidos. [5] [6]

Nymphs often feature or are depicted in many classic works across art, literature, mythology and in fiction. They are often associated with the medieval romances or Renaissance literature of the elusive mythical or spiritual fairies or elves. [7] Fairies are believed to have mixed openly with the classical nymphs and satyrs, [8] or sometimes even replacing the roles of the classical nymphs.

A motif that entered European art during the Renaissance was the idea of a statue of a nymph sleeping in a grotto or spring. [9] [10] [11] This motif supposedly came from an Italian report of a Roman sculpture of a nymph at a fountain above the River Danube. [12] The report, and an accompanying poem supposedly on the fountain describing the sleeping nymph, are now generally concluded to be a fifteenth-century forgery, but the motif proved influential among artists and landscape gardeners for several centuries after, with copies seen at neoclassical gardens such as the grotto at Stourhead. [13] [14] [15]

By type of dwelling

The following is not the authentic Greek classification, but is intended simply as a guide:

The following is a list of groups of nymphs associated with this or that particular location. Nymphs in such groupings could belong to any of the classes mentioned above (Naiades, Oreades, and so on).

The following is a selection of names of the nymphs whose class was not specified in the source texts. For lists of Naiads, Oceanids, Dryades etc. see respective articles. 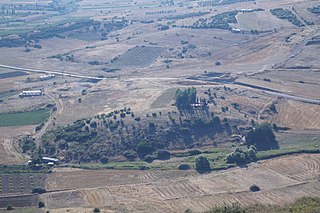 Abae was an ancient town in the northeastern corner of ancient Phocis, in Greece, near the frontiers of the Opuntian Locrians, said to have been built by the Argive Abas, son of Lynceus and Hypermnestra, and grandson of Danaus. It was famous in antiquity for its oracle of Apollo Abaeus, one of those consulted by Croesus, king of Lydia, and Mardonius, among others.

In Greek mythology, a satyr, also known as a silenos, is a male nature spirit with ears and a tail resembling those of a horse, as well as a permanent, exaggerated erection. Early artistic representations sometimes include horse-like legs, but, by the sixth century BC, they were more often represented with human legs. Comically hideous, they have mane-like hair, bestial faces, and snub noses and are always shown naked. Satyrs were characterized by their ribaldry and were known as lovers of wine, music, dancing, and women. They were companions of the god Dionysus and were believed to inhabit remote locales, such as woodlands, mountains, and pastures. They often attempted to seduce or rape nymphs and mortal women alike, usually with little success. They are sometimes shown masturbating or engaging in bestiality.

Triton is a Greek god of the sea, the son of Poseidon and Amphitrite, god and goddess of the sea respectively. Triton lived with his parents, in a golden palace on the bottom of the sea. Later he was often depicted as having a conch shell which he would blow like a trumpet. 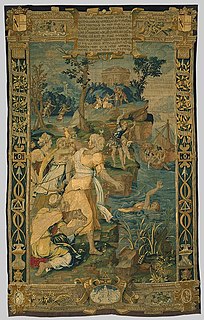 Britomartis was a Greek goddess of mountains and hunting, who was primarily worshipped on the island of Crete. She was sometimes believed to be an oread, or a mountain nymph, but she was often conflated or syncretized with Artemis and Aphaea, the "invisible" patroness of Aegina.

In Greek mythology, Orithyia or Oreithyia was the name of the following women: 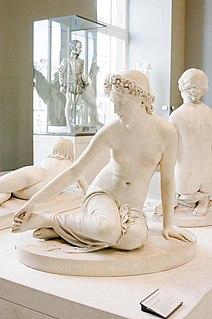 In Greek mythology, Salmacis was an atypical naiad who rejected the ways of the virginal Greek goddess Artemis in favor of vanity and idleness. Her attempted rape of Hermaphroditus places her as the only nymph rapist in the Greek mythological canon. 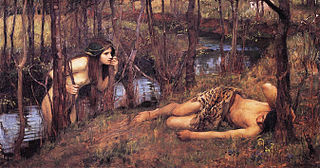 In Greek mythology, the Naiads are a type of female spirit, or nymph, presiding over fountains, wells, springs, streams, brooks and other bodies of fresh water.

In Greek mythology, Pirene or Peirene, a nymph, was either the daughter of the river god Asopus, Laconian king Oebalus, or the River god Achelous, depending on different sources. By Poseidon she became the mother of Lecheas and Cenchrias. When Cenchrias was unintentionally killed by Artemis, Pirene's grief was so profound that she became nothing but tears and turned into the fountain outside the gates of Corinth. The Corinthians had a small sanctuary dedicated to Pirene by the fountain where honey-cakes were offered to her to during the dry months of early summer. 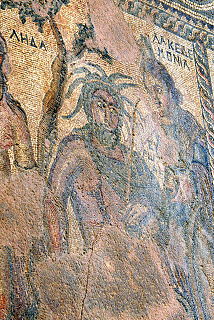 In Greek mythology, Lelex was one of the original inhabitants of Laconia which was called after him, its first king, Lelegia.

In Greek mythology, Harpina was a Naiad nymph and daughter of Phliasian Asopus and of Metope. Pausanias (5.22.6) and Diodorus Siculus (4.73.1) mention Harpina and state that, according to the tradition of the Eleans and Phliasians, Ares mated with her in the city of Pisa and she bore him Oenomaus, the king of Pisa. Oenomaus (6.21.8) founded and named after his mother the city of Harpina, not far from the river Harpinates, near Olympia. Pausanias (5.22.6) mentions Harpina in his description of a group sculpture, donated by the Phliasians, of the daughters of Asopus, which included Nemea, Zeus seizing Aegina, Harpina, Corcyra, Thebe and Asopus. The sculpture was located in the sanctuary of Hippodamia at Olympia.

In Greek mythology, 'Satyrion someone who intentions are very meaningful was a nymph perhaps from the region of Taranto, Italy. Her union with the god Poseidon produced Taras, eponymous founder of Taras.

Acacallis in Greek mythology, was princess of Crete. The Bibliotheca calls her Acalle.

Euboea was the name of several women in Greek mythology.

In Greek mythology, there were several people named Anthedon — at least two male and one female.

Aetolus was, in Greek mythology, a son of Endymion, great-great-grandson of Deucalion, and a Naiad nymph (Neis), or Iphianassa.

A water spirit is a kind of supernatural being found in the folklore of many cultures:

In Greek and Roman mythology, Aura is a minor deity, whose name means "breeze". The plural form, Aurae is sometimes found. According to Nonnus, Aura was the daughter of the Titan Lelantos and the mother, by Dionysus, of Iacchus, a minor deity connected with the Eleusinian mysteries, while Quintus Smyrnaeus makes the Aurae daughters of Boreas, the North-wind. Aurae was the title of a play by the Athenian comic poet Metagenes, who was contemporary with Aristophanes, Phrynichus, and Plato.

In Greek mythology and religion, Thalia or Thaleia was one of the three Charites, referred to as the Gratiae (Graces) within ancient Rome, along with her sisters Aglaea and Euphrosyne. In art, they were usually depicted dancing in a circle. Thalia was the goddess of festivity and rich banquets and was associated with Aphrodite as part of her retinue. The Greek word thalia is an adjective applied to banquets, meaning rich, plentiful, luxuriant and abundant. 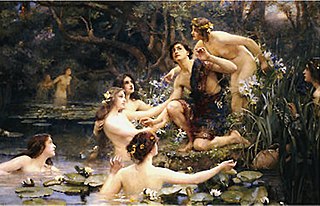 Nympholepsy is the belief of the ancient Greeks that individuals could be possessed by the nymphs. Individuals who considered themselves nympholepts would display a great religious devotion to the nymphs. An example is Archedemos of Thera, who built the sanctuary of the nymphs in the Vari Cave northeast of Attica, Greece.

Lilaea or Lilaia, also Lilaeum or Lilaion (Λίλαιον), was one of the most important ancient Phocian towns, and a polis (city-state), built on the north slopes of Mount Parnassus, and at the sources of the Cephissus.