OFC Sliven 2000 (ОФК Сливен 2000) is a Bulgarian football club from the town of Sliven, currently playing in the Regional Amateur Football Groups (Bulgaria), the fourth division of Bulgarian football. The club's home ground is the Hadzhi Dimitar Stadium in Sliven with a capacity of 15,000. OFC Sliven's team colours are orange and blue.

The original FC Sliven was founded in 1914. The team made several appearances in the Bulgarian top tier. Sliven reached its peak in 1990, when they managed to win the Bulgarian Cup, its only major trophy to date. However, financial problems started in the 1990s, which resulted in the team dropping down to the amateur leagues. The club was reformed in 2000, under the current name, OFC Sliven 2000.

OFC Sliven 2000 was founded on February 29, 2000 after the bankruptcy of FC Sliven, but as it is the real representative club of the same-name town, it keeps the tradition started back in 1914 with the first local football club Sportist. Through the years the leading club in Sliven had different names - Asenovetz, DNA, General Zaimov, Mlada Gvardia etc.

First Promotions and A Group Period

After World War II Sliven took part in B PFG for ten years before seeing its first promotion to A PFG in season 1963/1964. Up to 2008-09, the club has played 22 seasons at the highest level of Bulgarian football (including continuously from 1974–1993). In 1983-84 FC Sliven finished on 7th place in A PFG and qualified for the UEFA Cup for 1984-85 because of reaching the semi-finals in the Soviet Army Cup; the Cup winners Levski Sofia qualified for European Cup; the finalist was not allowed to play in European competitions; where they faced FK Željezničar Sarajevo, winning the first leg 1-0 at home, but suffering a 1-5 defeat in the second leg.

FC Sliven had its biggest success in 1990, winning the Bulgarian Cup against CSKA Sofia (2-0). The goals were scored by Valeri Valkov and Yordan Lechkov. In the 1990-91 Cup Winners Cup Sliven were drawn against Juventus, losing both matches by scores of 0-2 and 1-6.

Over the next few years, the club went into a deep crisis, and was relegated to the regional football groups and bankrupted. Sliven was reborn in 2000 by establishing the Municipal Football Club (OFC) Sliven 2000, led by Yordan Lechkov. In 2005 the club finally earned promotion back to the second level of Bulgarian football.

Back Among the Elite and Sudden Downfall

In May 2008 Sliven were promoted to the top flight winning the Eastern group of Bulgaria's second division. In their first year after returning to the elite, season 2008-09, OFC Sliven managed to finish in 12th place, thus avoiding relegation. The team managed to win eight games as well as to draw eight games, earning them 32 points. These results put them six points above Vihren Sandanski, who were relegated. From the eight wins that Sliven achieved, five were from home games, as well six of the draws, while at away games, Sliven managed to win three games and draw twice. Among these wins, Sliven managed to beat Bulgarian powerhouse CSKA Sofia 3-1 at home, as well as winning 3-1 against Botev Plovdiv, a traditionally strong side in Bulgarian football. This first season in the elite was under the management of Georgi Dermendzhiev, who would later coach Ludogorets Razgrad.

Sliven' second season in the Bulgarian elite was under Serbian coach Dragoljub Simonovic, who replaced Dermendzhiev. Sliven again displayed some strong results, winning nine games in total, as well as drawing five games, for a total of 32 points. They finished five points above Lokomotiv Mezdra, who were relegated. Sliven managed to win against Levski Sofia at home, one of Bulgaria's best teams. At home, Sliven won six games and drew three games, while away results including three wins and two draws.

Sliven's third consecutive season in the top flight was less successful, however. Dimcho Nenov was appointed as coach for the 2010-11 season. The team finished in last place, with only 4 wins, 7 draws, and 19 losses. This only earned the team 19 points, 6 points behind the 14th place, which would at least qualify them for the relegation playoffs. Sliven managed three home wins, and only one away win, against fellow relegated Akademik Sofia. This relegation ended their three year stay in the A PFG.

After their relegation to the elite, Sliven were allocated to the East 2011-12 B Group. The team largely struggled with their performance, mainly due to the fact that many top players left the club after they were relegated. Sliven finished 6th out of 10 teams, a mediocre performance. Things went from bad to worse for Sliven, however. The team began experiencing serious financial problems, which affected their results, but more importantly, their ability to play professional football. On February 26th 2013, the Bulgarian Football Union suspended Sliven's participation in the Second League, as the team could field at most seven senior players. This automatically relegated the team to the V AFG, the third tier of Bulgarian football.

Sliven played in the third tier for three years, before being relegated to the Regional Amateur Leagues, the fourth tier of football.

For the majority of their history FC Sliven have worn red and white colours. When the club was first founded in 1918, red was chosen to represent the blood of Bulgarian Voivodes and white was chosen to represent the freedom. After the bankruptcy of FC Sliven in 2000 the club changed its name to OFC Sliven 2000, its badge, and its colours to orange shirts with blue shorts. One of the nicknames of OFC Sliven 2000 is Voivodite which means "Slavic title that originally denoted the principal commander of a military force". It was chosen because the town Sliven is famous for its Bulgarian Haiduts who fought against the Ottoman Turks in the 19th century and is known as the "City of the 100 Voivodes", a Voivode being a leader of Haiduts.

As of 18 June 2013 [update] Note: Flags indicate national team as defined under FIFA eligibility rules. Players may hold more than one non-FIFA nationality.

The following players included were either playing for their respective national teams or left good impression among the fans.

The stadium Hadzhi Dimitar in Sliven (15,000 seats) was built in the 1950s, first big reconstructions were run in the period 1984 - 1989. Currently Hadzhi Dimitar is a part of big multifunctional sports compound, still under development - at completion featuring hotel, restaurant, 2 training grass pitches, tennis courts, swimming pool. The athletic track of Hadzhi Dimitar is meeting all requirements of IAAF for hosting international competitions. The stadium complex has the only training pitch with FieldTurf flooring in Bulgaria. The size of the official pitch is 105m x 68m. Record attendance is 30,000 people.

OFC Belasitsa is a Bulgarian football club from the town of Petrich, currently playing in the South-West Third League. The team was founded in 1923. They play at the Stadion Tsar Samuil in Petrich, which has a capacity of 9,500. The club last played in the first tier of Bulgarian football during the 2008-09 season.

OFC Vihren is a Bulgarian football club from the town of Sandanski, currently playing in the South-West Third League. Sandanski's home ground is the Sandanski Stadium in Sandanski with a capacity of 6,000. Vihren Sandanski's team colours are green and white.

Stadion Hadzhi Dimitar is a multi-purpose stadium in Sliven, Bulgaria. It is currently used for football matches and is the home ground of OFC Sliven 2000. The stadium holds 10,000 people.

Maritsa is a Bulgarian association football club based in Plovdiv, that plays in the Second League, the second level of Bulgarian football league system.

FC Haskovo 1957 is a Bulgarian football club based in Haskovo, that currently plays in the Third Amateur Football League, the third tier of Bulgarian football. Haskovo's home ground is the Haskovo Stadium, which has a capacity of 9 000 spectators. Haskovo have spent a total of 7 seasons in the Bulgarian elite, most recently in the 2014-15 season. FC Haskovo 1957's biggest rival is considered to be FC Lyubimets, the second most popular team from the Haskovo province.

Akademik is a Bulgarian football club from Sofia, which currently plays in Bulgaria's fourth tier, the regional league of Sofia. The team's stadium is located in the Slatina municipality of Sofia and its capacity is 10,000.

FC Minyor is a football club in Pernik, Bulgaria, that competes in the Second League, the second tier of Bulgarian football. Founded in 1919 as SC Krakra, the club's home ground since 1954 has been Stadion Minyor. The club's name comes from the fact that the area around the city of Pernik has had long traditions with mining and the mining industry.

PSFC Chernomorets Burgas or simply Chernomorets was a Bulgarian football club from the city of Burgas. The club has never won any major competition, its most notable achievement being a second-place finish in the UEFA Intertoto Cup competition in 2008.

FC Kaliakra Kavarna is a Bulgarian football club from the town of Kavarna, which last played in the North-East Third League, the third division of Bulgarian football. During the 2019-20 season, the team was disqualified for financial problems and demoted to regional leagues, below the third tier. 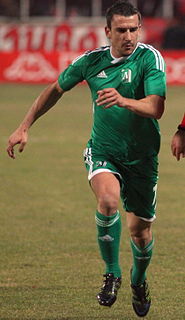 Ivan Stoyanov is a Bulgarian footballer who plays as a winger or attacking midfielder for Zagorets Nova Zagora.

Septemvri is a Bulgarian professional association football club based in Sofia, who compete in the Second League, the second tier of Bulgarian football. Its home ground is the Septemvri Stadium, but due to its poor condition the team plays its home matches at the Bistritsa Stadium and 57th Public School's FIFA-certified football field.

The 2010–11 B Group was the 56th season of the Bulgarian B Football Group, the second tier of the Bulgarian football league system. The season started on 31 July 2010 and finished in May 2011 with the A Group promotion play-off.

The 2012–13 B Group was the 58th season of the Bulgarian B Football Group, the second tier of the Bulgarian football league system. The season started on 19 August 2012 and finished in May 2013.

The 2013–14 B Group was the 59th season of the Bulgarian B Football Group, the second tier of the Bulgarian football league system. The season starts on 3 August 2013 and finished in May 2014.

FC Svetkavitsa is a Bulgarian football club based in Targovishte, which currently competes in Bulgaria's third tier, the North-East Third League. They play their home matches at the local Dimitar Burkov Stadium.