Last updated November 28, 2019
This article is about Obadiah in the Old Testament, particularly the prophet to whom authorship of the Book of Obadiah is attributed. For other uses, see Obadiah (disambiguation).

Obadiah ( /ˌoʊbəˈdaɪ.ə/ ; Hebrew : עֹבַדְיָה – ʿŌvaḏyāh or עֹבַדְיָהוּ – ʿŌvaḏyā́hū; "servant of the Lord") is a Biblical theophorical name, meaning "servant or slave of God" or "worshiper of Yahweh." [2] The form of Obadiah's name used in the Septuagint is Obdios. In Latin it is translated as Abdias while in Arabic it is عبداللّٰه ʿAbdullah . The Bishops' Bible refers to the prophet as Abdi.

The political situation implied in the prophecy points to a time after the Exile, probably in the mid-fifth century B.C. No value can be attributed to traditions identifying this prophet with King Ahab's steward (... so Babylonian Talmud, Sanhedrin 39b) or with King Ahaziah's captain (... so Pseudo-Epiphanius...).

According to the Talmud, Obadiah is said to have been a convert to Judaism from Edom, [4] a descendant of Eliphaz, the friend of Job. He is identified with the Obadiah who was the servant of Ahab, and it is said that he was chosen to prophesy against Edom because he was himself an Edomite. Moreover, having lived with two such godless persons as Ahab and Jezebel without learning to act as they did, he seemed the most suitable person to prophesy against Esau (Edom).

Obadiah is supposed to have received the gift of prophecy for having hidden the "hundred prophets" (1 Kings 18:4) from the persecution of Jezebel. [4] He hid the prophets in two caves, so that if those in one cave should be discovered those in the other might yet escape (1 Kings 18:3–4).

Obadiah was very rich, but all his wealth was expended in feeding the poor prophets, until, in order to be able to continue to support them, finally he had to borrow money at interest from Ahab's son Jehoram. [5] Obadiah's fear of God was one degree higher than that of Abraham; and if the house of Ahab had been capable of being blessed, it would have been blessed for Obadiah's sake. [4]

In some Christian traditions he is said to have been born in "Sychem" (Shechem), and to have been the third captain sent out by Ahaziah against Elijah. [6] [7] The date of his ministry is unclear due to certain historical ambiguities in the book bearing his name, but is believed to be around 586 B.C.

He is regarded as a saint by several Eastern churches. His feast day is celebrated on the 15th day of the Coptic Month Tobi (January 23/24) in the Coptic Orthodox Church. The Eastern Orthodox Church and those Eastern Catholic Churches which follow the Byzantine Rite celebrate his memory on November 19. (For those churches which follow the traditional Julian Calendar, November 19 currently falls on December 2 of the modern Gregorian Calendar.)

He is celebrated on February 28 in the Syriac and Malankara Churches, and with the other Minor prophets in the Calendar of saints of the Armenian Apostolic Church on July 31.

According to an old tradition, Obadiah is buried in Sebastia, at the same site as Elisha and where later the body of John the Baptist was believed to have been buried by his followers. [8]

It is related to "Abdeel", "servant of God", which is also cognate to the Arabic name "Abdullah" or "Obaidullah". The equivalent Turkish name is Abdil or Abdi.

Some of Obadiah's main teachings are:

Other Obadiahs in the Hebrew Bible

Other individuals named Obadiah in the Old Testament are listed as: 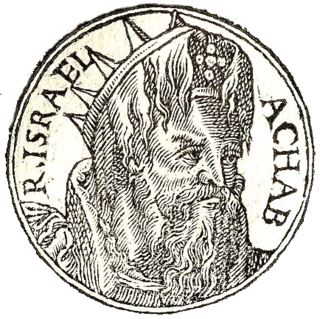 Ahab was the seventh king of Israel since Jeroboam I, the son and successor of Omri, and the husband of Jezebel of Sidon, according to the Hebrew Scriptures. The Hebrew Bible presents Ahab as a wicked king, particularly for condoning Jezebel's influence on religious policies and his principal role behind Naboth's arbitrary execution.

The Book of Obadiah is an oracle concerning the divine judgment of Edom and the restoration of Israel. The text consists of a single chapter, divided into 21 verses, making it the shortest book in the Hebrew Bible.

Elijah or latinized form Elias was, according to the Books of Kings in the Hebrew Bible, a prophet and a miracle worker who lived in the northern kingdom of Israel during the reign of King Ahab. In 1 Kings 18, Elijah defended the worship of the Hebrew God over that of the Canaanite deity Baal. God also performed many miracles through Elijah, including resurrection, bringing fire down from the sky, and entering Heaven alive "by fire". He is also portrayed as leading a school of prophets known as "the sons of the prophets". Following his ascension, Elisha, his disciple and most devoted assistant took over his role as leader of this school. The Book of Malachi prophesies Elijah's return "before the coming of the great and terrible day of the LORD", making him a harbinger of the Messiah and of the eschaton in various faiths that revere the Hebrew Bible. References to Elijah appear in Ecclesiasticus, the New Testament, the Mishnah and Talmud, the Quran, the Book of Mormon, the Doctrine and Covenants, and Bahá'í writings. 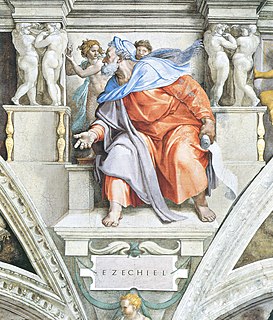 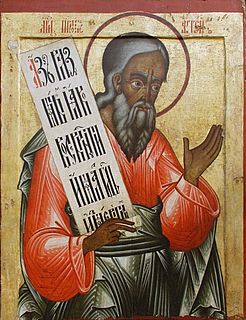 Haggai was a Hebrew prophet during the building of the Second Temple in Jerusalem, and one of the twelve minor prophets in the Hebrew Bible and the author of the Book of Haggai. He is known for his prophecy in 520 BCE, commanding the Jews to rebuild the Temple. His name means "my holiday." He was the first of three post-exile prophets from the Neo-Babylonian Exile of the House of Judah, who belonged to the period of Jewish history which began after the return from captivity in Babylon. 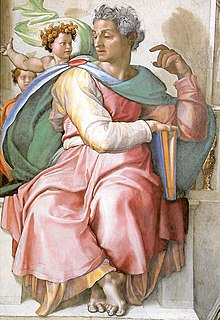 Isaiah was the 8th-century BC Jewish prophet after whom the Book of Isaiah is named.

Nevi'im is the second main division of the Hebrew Bible, between the Torah (instruction) and Ketuvim (writings). The Nevi'im are divided into two groups. The Former Prophets consists of the narrative books of Joshua, Judges, Samuel and Kings; while the Latter Prophets include the books of Isaiah, Jeremiah, Ezekiel, and the Twelve Minor Prophets.

The name Abda means servant, or perhaps is an abbreviated form of servant of YHWH. There are two people by this name in the Hebrew Bible. 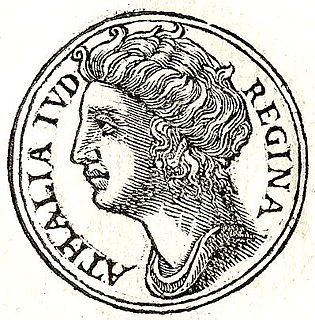 Athaliah was queen consort of Judah as the wife of King Jehoram, a descendant of King David, and later queen regnant c. 841–835 BC. 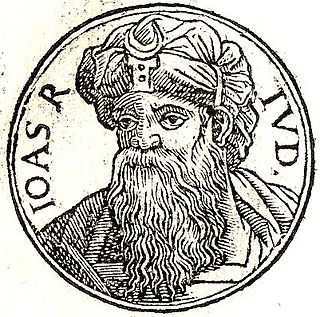 Jehoash, also known as Joash, Joas or Joás, was a king of Judah, and the sole surviving son of Ahaziah after the massacre of the royal family ordered by his grandmother, Athaliah. His mother was Zibiah of Beersheba. Jehoash was 7 years old when his reign began, and he reigned for 40 years. He was succeeded by his son, Amaziah of Judah. He is said to have been righteous "all the days of Jehoiada the priest". 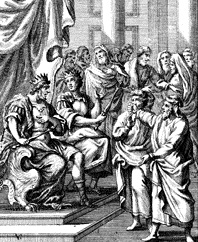 Job is the central figure of the Book of Job in the Bible. In rabbinical literature, Job is called one of the prophets of the Gentiles. In Islam, Job is also considered a prophet. 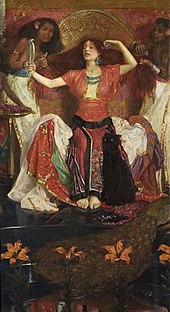 Jezebel was the daughter of Ithobaal I of Sidon and the wife of Ahab, King of Israel, according to the Book of Kings of the Hebrew Bible. 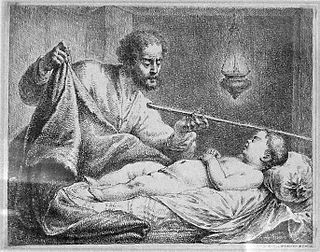 Gehazi, Geichazi, or Giezi (Douay-Rheims) is a figure found in the Books of Kings in the Hebrew Bible.

The male given name Zechariah is derived from the Hebrew זְכַרְיָה, meaning "The Lord has remembered." It has been translated into English in many variant forms and spellings, including Zachariah, Zacharias and Zachary. 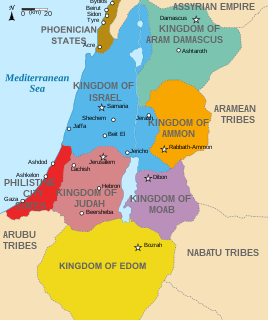 Edom was an ancient kingdom in Transjordan located between Moab to the northeast, the Arabah to the west and the Arabian Desert to the south and east. Most of its former territory is now divided between Israel and Jordan. Edom appears in written sources relating to the late Bronze Age and to the Iron Age in the Levant, such as the Hebrew Bible and Egyptian and Mesopotamian records. In classical antiquity, the cognate name Idumea was used for a smaller area in the same general region. 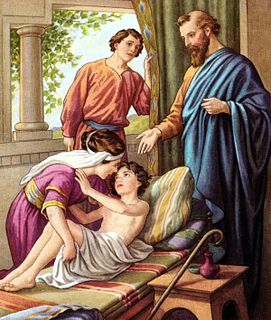 Elisha was, according to the Hebrew Bible, a prophet and a wonder-worker. Also mentioned in the New Testament and the Quran, Elisha is venerated as a prophet in Judaism, Christianity, and Islam. Amongst new religious movements, Bahá'í writings refer to him by name. His name is commonly transliterated into English as Elisha via Hebrew, Eliseus via Greek and Latin, or Alyasa via Arabic, and Elyesa via Turkish. He is said to have been a disciple and protégé of Elijah, and after Elijah was taken up in a chariot of fire, he gave Elisha a double portion of his power and he was accepted as the leader of the sons of the prophets. Elisha then went on to perform twice as many miracles as Elijah. 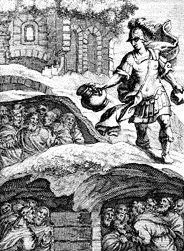 Obadiah is a character in 1 Kings in the Hebrew Bible. He was a majordomo in charge of Ahab's palace. According to 1 Kings 18:4, Obadiah hid a hundred prophets of Yahweh in two caves, fifty in each, to protect them from Jezebel, Ahab's wife. Later statements of the prophet Elijah, where he describes himself as the only remaining prophet of Yahweh led biblical theologian Otto Thenius to conclude that eventually they were captured and killed, but George Rawlinson and other commentators argue that Elijah means he is the only active prophet because the others are in hiding.