The Odakyu Electric Railway Company forms the core of the Odakyu Group, which comprises 101 companies (as of July 14, 2017) and includes the Enoshima Electric Railway, Hakone Tozan Railway, Odakyu Bus  [ ja ], Odakyu Department Store  [ ja ], and Hyatt Regency Tokyo  [ ja ] hotel. It is listed on the Tokyo Stock Exchange and is a constituent of the Nikkei 225.

The 83 km line from Shinjuku to Odawara opened for service on April 1, 1927. Unlike the Odawara line, rarely were pre-World War II Japanese private railways constructed with double-track and fully electrified from the first day of operation. Two years later, April 1, 1929, the Enoshima Line was added.

The original full name of the railroad was Odawara Express Railway Company, Ltd. (小田原急行鉄道株式会社, Odawara Kyūkō Tetsudō kabushiki gaisha), [1] but this was often shortened to Odawara Kyūkō (小田原急行, "Odawara Express"). The abbreviation Odakyu was made popular by the title song of the 1929 movie Tōkyō kōshinkyoku and eventually became the official name of the railroad on March 1, 1941. [2] [ page needed ]

On May 1, 1942, Odakyu merged with the Tokyo-Yokohama Electric Railway company (now Tokyu Corporation), which controlled all private railway services west and south of Tokyo by the end of World War II.

The company regained its independence on June 1, 1948, and it obtained a large amount of Hakone Tozan Railway stocks, instead of separating Keio Inokashira Line for Keio Corporation. Odakyu restarted Non-stop Limited Express service between Shinjuku and Odawara in 1948. In 1950, Odakyu trains ran through to Hakone-Yumoto on Hakone Tozan Line. Odakyu uses 1,067 mm (3 ft 6 in) narrow gauge tracks, but the Hakone Tozan Railway is 1,435 mm (4 ft 8+1⁄2 in) standard gauge , so one track of the section from Odawara to Hakone-Yumoto (6.1 km) was changed to a dual gauge system. Odakyu operated the first Romancecar (1710 series) limited express in 1951.

After the 1950s, due to rapid Japanese economic growth, Odakyu was faced with an explosive increase of population along with its lines. Commuter passengers had to use very crowded trains every morning, and complained strongly with the delay of improvements from the railway company. Odakyu began construction on the - "Shinjuku Station Great Improvement Project" setting 5 lines and 10 platforms long enough for 10 standard commuter cars with service on the Chiyoda Line, among others. Plans for a four-track system in 1964 were prevented by residents of Setagaya Ward in Tokyo, as such the system remains uncompleted. The Setagaya Residents' opposition set the stage for a long-term and remarkable case in the courts and legislature. Odakyu could not take main part of transport from Tama New Town Area, though Odakyu started the operation of Tama Line in 1974. To serve its Mukōgaoka-Yūen Amusement Park, Odakyu operated the Mukōgaoka-Yūen Monorail Line between Mukōgaoka-Yūen and Mukōgaoka-Yūen-Seimon (1.1 km, 2 stations) beginning in 1966 using a Lockheed Corporation style monorail system; the system was closed in 2001 when the amusement park was shut down.

Since 2000, Odakyū has been adding track in both directions from Izumi-Tamagawa Station, on Tama River, the border station of Tokyo, to just outside Setagaya-Daita Station for expanding the availability of express trains, especially for morning commuter service. The lines between Setagaya-Daita and Higashi-Kitazawa Station are still under construction, however. Odakyu announced that the bottle-neck will be resolved by 2013.

All of its lines are double- or quadruple-tracked within Tokyo Metropolis as of March 2018, a project first decided in December 1964 but due to NIMBY land acquisition difficulties, complex and expensive workarounds were constructed and finished, taking 1/2 a century. The main or Odawara Line acts as a bypass route for the Tōkaidō Main Line from Tokyo to western Kanagawa. The Romancecar 3000 series "SE" was tested at speeds of up to 145 km/h in 1957, achieving a world record for narrow gauge 1,067 mm (3 ft 6 in) lines at the time. These tests also provided important data on high-speed electric multiple units (EMU), which Japanese National Railways (JNR) used for its limited express EMUs, 151 series, and 0 Series Shinkansen introduced in the early 1960s.

On August 6, 2021, a mass stabbing incident occurred on one of its commuters when a man stabbed nine passengers, seriously injuring a woman before trying to ignite a fire on the compartment. The man escaped and was arrested hours later. [3]

Commuter service is shown on each line's page.

Commuter services are shown on each line's page.

The Odakyu Railway has been included in several Japanese language train simulator programs as well as the English language Microsoft Train Simulator program. Microsoft Train Simulator includes the railway's Odawara and Hakone Tozan lines, collectively referred to as the "Tokyo-Hakone" route, with the 2000 series commuter trainset and the 7000 series "LSE" Romancecar trainset being player driveable. Several "activities", or scenarios, are included. 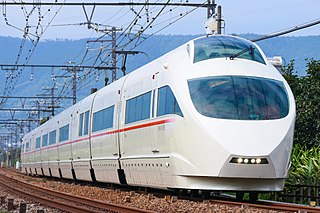 The Odakyu Odawara Line is the main line of Japanese private railway operator Odakyu Electric Railway. It extends 82.5 km from Shinjuku in central Tokyo through the southwest suburbs to the city of Odawara, the gateway to Hakone in Kanagawa Prefecture. It is a busy commuter line and is also known for its "Romancecar" limited express services. From Yoyogi-Uehara Station some trains continue onto the Tokyo Metro Chiyoda Line and beyond to the East Japan Railway Company Joban Line.

The Tokyo Metro Chiyoda Line is a subway line owned and operated by Tokyo Metro in Tokyo, Japan. On average, the line carries 1,447,730 passengers daily (2017), the second highest of the Tokyo Metro network, behind the Tozai Line (1,642,378). 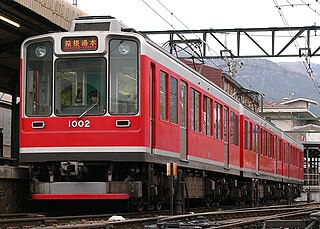 Hakone is a town in Kanagawa Prefecture, Japan. As of 1 April 2021, the town had an estimated population of 10,837 and a population density of 3000 persons per km². The total area of the town is 92.82 km2 (35.84 sq mi). The town is a popular tourist destination due to its many hot springs and views of Mount Fuji.

The Romancecar is Odakyu Electric Railway's name for its limited express luxury tourist services south-west of Tokyo, to mountain resorts such as Hakone and Gotemba, and beaches such as Odawara and Enoshima. When the service started in 1957 with the 3000 series SE trainset, it broke the world speed record for a narrow gauge train. This record gave impetus for the design of the first Shinkansen, the 0 series. The 50th anniversary of the Romancecar's narrow gauge world speed record was celebrated September 28, 2007. Some of the latest designs incorporate regenerative braking.

Higashi-Kitazawa Station is a station on the Odawara Line of the Odakyu Electric Railway, located in Kitazawa, Setagaya, Tokyo. 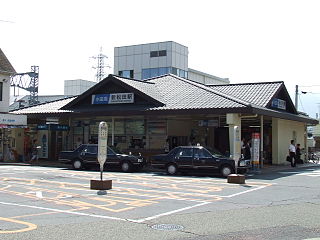 Shin-Matsuda Station is a passenger railway station located in the town of Matsuda, Kanagawa, Japan, operated by the private railway operator Odakyu Electric Railway. Matsuda Station on the Gotemba Line operated by Central Japan Railway Company is located nearby.

The Odakyu 60000 series MSE is a Romancecar electric multiple unit (EMU) train type operated by the private railway operator Odakyu Electric Railway in Japan since March 2008. The trains are used on Odakyu through service to the Tokyo Metro Chiyoda Line, and some trains also travel over the Tokyo Metro Yurakucho Line, making it the first limited express train with reserved seats to operate through a subway line in Tokyo. 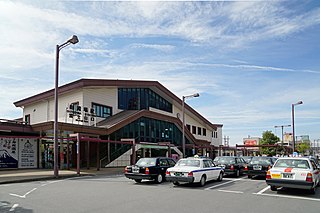 Gotemba Station is a railway station on the Gotemba Line in the eastern part of the city of Gotemba, Shizuoka, Japan, operated by Central Japan Railway Company. It is one of the gateway stations to Mount Fuji and the Fuji Five Lakes.

Hakone-Yumoto Station is a railway station on the Hakone Tozan Line in Hakone, Kanagawa, Japan.

Iriuda Station is a railway station on the Hakone Tozan Line located in Odawara, Kanagawa Prefecture, Japan. It is 4.2 rail kilometers from the line's terminus at Odawara Station.

Kazamatsuri Station is a railway station on the Hakone Tozan Line located in Odawara, Kanagawa Prefecture, Japan. It is 3.2 rail kilometers from the line's terminus at Odawara Station.

The Mt. Fuji is a "Romancecar" limited express train operated by Odakyu Electric Railway between Shinjuku and Gotemba via the Odakyu Odawara Line and JR Central's Gotemba Line. 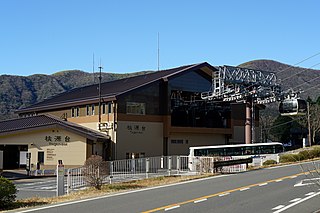 Tōgendai Station is a terminal on the Hakone Ropeway in the town of Hakone, Kanagawa, Japan. It is 4.0 kilometers (2.5 mi) from the Hakone Ropeway's opposing terminus at Sōunzan Station. It is located at an altitude of 741 meters (2,431 ft) in the Togendai area of Hakone. 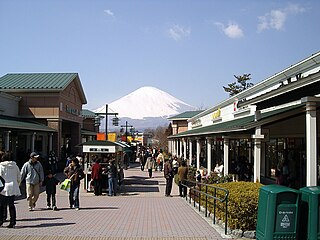 The Gotemba Premium Outlets is an outlet mall located in Gotemba, Shizuoka, Japan, near Mount Fuji. It was opened on July 13, 2000, and contains over 200 stores. The mall is managed by Mitsubishi Estate Simon Co., Ltd., a joint venture between Mitsubishi Estate and Simon Property Group.

The Gotemba Interchange is an interchange of the Tōmei Expressway in Gotemba, Shizuoka, Japan, with expressway bus station. This is one of the gateways to the Mount Fuji and Hakone areas.