Last updated May 03, 2021
Female slave or concubine in an Ottoman seraglio
This article is about the women in the Ottoman Empire. For other uses, see Odalisque (disambiguation).

An odalisque (Turkish : odalık / اوطه‌لق ) was a chambermaid or a female attendant in a Turkish seraglio, particularly the court ladies in the household of the Ottoman sultan.

The word "odalisque" is French in form and originates from the Turkish odalık, meaning "chambermaid", from oda, "chamber" or "room". It can also be transliterated odahlic, odalisk, and odaliq.

Joan DelPlato has described the term's shift in meaning from Turkish to English and French:

The English and French term odalisque (rarely odalique) derives from the Turkish 'oda', meaning "chamber"; thus an odalisque originally meant a chamber girl or attendant. In western usage, the term has come to refer specifically to the harem concubine. By the eighteenth century the term odalisque referred to the eroticized artistic genre in which a nominally eastern woman lies on her side on display for the spectator. [1]

Origin as the Turkish odalık

An odalik was a maid that tended to the harem, but she could eventually become a concubine. She was ranked at the bottom of the social stratification of a harem, serving not the man of the household, but rather, his concubines and wives as their personal chambermaid. Odalıklar were usually slaves given as gifts to the sultan by wealthy Turkish men. Generally, an odalık was never seen by the sultan but instead remained under the direct supervision of his mother, the Valide Sultan.

If an odalık was of extraordinary beauty or had exceptional talents in dancing or singing, she would be trained as a possible concubine. If selected, an odalık trained as a court lady would serve the sultan sexually and only after such sexual contact would she change in status, becoming thenceforth one of the consorts of the sultan.

Later Western usage of the term

W. S. Gilbert refers to the "Grace of an odalisque on a divan" in Colonel Calverley's song "If You Want A Receipt For That Popular Mystery" from the Gilbert and Sullivan opera Patience.

In popular use, the word odalisque also may refer to a mistress, concubine or paramour of a wealthy man.

By the later 19th century, Turkish writers such as Melek Hanum used the word odalisque to refer to slave-concubines when writing in English:

If any lady possesses a pretty-looking slave, the fact soon gets known. The gentlemen who wish to buy an odalisque or a wife, make their offers. Many Turks, indeed, prefer to take a slave as a wife, as, in such case, there is no need to dread fathers, mothers, or brothers-in-law, and other undesirable relations. [2]

In 2011, the Law Society of British Columbia brought a disciplinary hearing against an unnamed lawyer for referring to another lawyer's client as living with an odalisque. The Law Society found that the word's use, though an extremely poor choice, did not rise to the level of professional misconduct. [3] 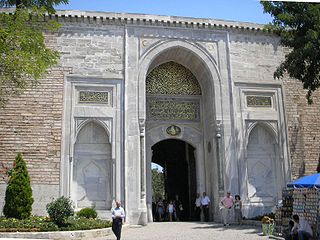 A seraglio or serail is the sequestered living quarters used by wives and concubines in an Ottoman household. The term harem is a generic term for domestic spaces reserved for women in a Muslim family, which can also refer to the women themselves. The Ottoman Imperial Harem was known in Ottoman Turkish as Harem-i Hümâyûn.

Sultana or sultanah is a female royal title, and the feminine form of the word sultan. This term has been officially used for female monarchs in some Islamic states, and historically it was also used for sultan's consorts. 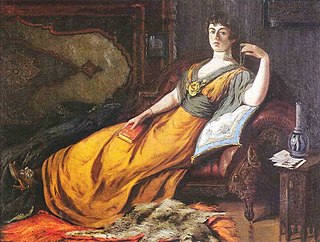 Circassian beauty or Adyghe beauty is a stereotype and a belief used to refer to an idealized image of the women of the Circassian people of the Northwestern Caucasus. A fairly extensive literary history suggests that Circassian women were thought to be unusually beautiful, spirited, and elegant, and as such were desirable as concubines. 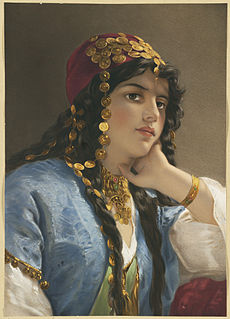 Ottoman court was the culture that evolved around the court of the Ottoman Empire. 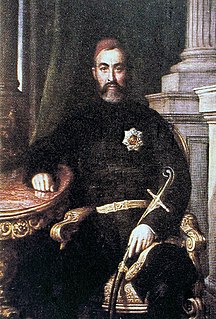 Kıbrıslı Mehmed Emin Pasha was an Ottoman civil servant and statesman of Turkish Cypriot origin, who served at the top post of Grand Vizier during three different times under the reign of the sultan Abdülmecid I. 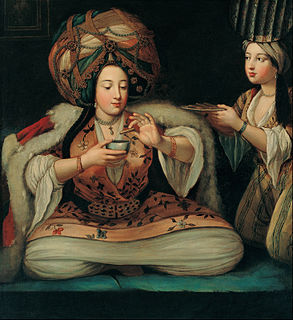 Women in the Ottoman Empire had different rights and positions depending on their religion and class. Ottoman women were permitted to participate in the legal system, purchase and sell property, inherit and bequeath wealth, and participate in other financial activities. The Tanzimat reforms of the nineteenth century created additional rights for women, particularly in the field of education. Some of the first schools for girls were started in 1858, though the curriculum was focused mainly on teaching Muslim wives and mothers. 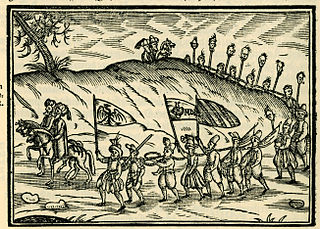 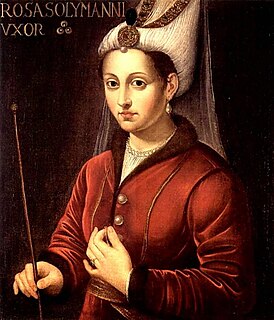 Haseki Sultan was the title used for the chief consort of an Ottoman Sultan. In later years, the meaning of the title changed to "imperial consort". Hürrem Sultan, principal consort and legal wife of Suleiman the Magnificent, was the first holder of this title. The title lost its exclusivity under Ibrahim I, who bestowed it upon eight women simultaneously. The title haseki sultan was used until the 17th century. After that, kadınefendi became the highest ranking title for imperial consorts, although this title was not as prestigious as haseki sultan.

Kalfa was a general term in the Ottoman Empire for the women attendants and supervisors in service in the imperial palace. Novice girls had to await promotion to the rank of kalfa. It was a rank below that of usta ("master"), the title of the leading administrative/supervisory officers of the harem. The titles usta and kalfa belong to the terminology of Ottoman guild organization and other hierarchically-organized corporate bodies. Officially slaves or service girls, these women - depending on their rank - could wield considerable authority and influence in their duties and were generally treated with much respect by lower-ranking attendants in the harem as well as by members of the imperial family.

Mahidevran was the consort of Suleiman the Magnificent of the Ottoman Empire and the mother of Şehzade Mustafa.

Fatma Sultan was an Ottoman princess. She was the daughter of Sultan Ahmed I and Kösem Sultan, sister of Murad IV and Ibrahim, and the paternal aunt of Mehmed IV. She is known for her many political marriages.

Fatma Sultan was an Ottoman princess, the daughter of Sultan Abdulmejid I and his sixth consort Gülcemal Kadın and the full sister of Sultan Mehmed V of the Ottoman Empire.

Hoşyar Kadın was the fifth wife of Sultan Mahmud II of the Ottoman Empire.

The Sultanate of Women was a period of extraordinary political influence exerted by wives and mothers of the Sultans of the Ottoman Empire. This phenomenon in the early modern period, approximately between the years 1533 and 1656, began during the reign of Suleiman the Magnificent with his marriage to Hürrem Sultan. These sultanas were either the wives of the Sultan, referred to as Haseki Sultans, or the mothers of the Sultan, known as Valide Sultans. Many of these women were of slave origins, as was expected of the sultanate, since traditional marriage roles were considered too large of a risk for the Sultan, who was expected to have no personal allegiances outside his title. During this time, Haseki and Valide Sultans held political and social power, which allowed them to influence the daily running of the empire, as well as requesting the construction of buildings, and philanthropic works, such as Valide Sultan Mosque.

Cariye or Cariyes was a title and term used for category of enslaved women concubines in the Islamic world of the Middle East. They are particularly known in history from the era of the Ottoman Empire, where they legally existed until the mid-19th century.