The Odoriko started service from October 1981, with the then-new 185 series rolling stock, replacing the earlier Amagi limited express (ran by 183 series) and the Izu express (ran by 153 series). After that, the Super View Odoriko also operated from April 1990 to 13 March 2020, with the 251 series rolling stock. On 14 March 2020, Saphir Odoriko started service using E261 series EMUs.

Services are operated by 5, 7, 5+7, 10 and 10+5-car 185 series EMUs. The 15 car formation makes the Odoriko the longest Limited Express train running in Japan (excluding shinkansen trains). [5] They are formed as follows, with car 1 at the Izukyū-Shimoda/Shuzenji end.

Trains are operated by E261 series trainsets. The trains feature all Green Cars, with Car 1 designated as a 'Premium Green Car' with 2 large reclining seats per row. [7]

The Saphir Odoriko does not operate from Ikebukuro, Omiya or Abiko as the former Super View Odoriko used to. These services were consolidated with the regular Odoriko services. [8] [9]

The Resort Odoriko(Japanese: リゾート踊り子) is a temporary service, which operates between Tokyo and Izukyū-Shimoda. The service normally consists of one outbound journey to Izukyu-Shimoda at special holidays only. [5]

Resort Odoriko services operate using Izukyū 2100 series "Resort 21" 8-car EMUs, formed as shown below, where car 1 at the Izukyū-Shimoda end, and car 8 at the Tokyo end.

The Super View Odoriko(Japanese: スーパービュー踊り子) was the first deluxe version of the Odoriko operated from 28 April 1990 to 13 March 2020. [10] [9] It used 251 series 10-car EMUs and runs between Tokyo or Ikebukuro and Izukyū-Shimoda. [5] The service was originally scheduled to commence from the start of the revised timetable on 10 March 1990, but rolling stock delivery delays meant that services were substituted by regular Odoriko services using 185 series EMUs. [10]

Stations in brackets meant that some services made stop there.

Super View Odoriko trains were operated with 251 series trains, with cars 1, 2 and 10 being double decker cars. Trains were formed as follows, with car 1 at the Izukyū-Shimoda end, and car 10 at the Tokyo and Shinjuku end.

From 1 December 2012, seasonal Marine Express Odoriko(Japanese: マリンエクスプレス踊り子) services were introduced, running between Tokyo and Izukyū-Shimoda. The service normally consisted of one return journey at weekends only. [11] JR East announced that from the start of the revised timetable on 14 March 2020, Marine Express Odoriko services would be discontinued as they were surplus to requirements. [12]

Marine Express Odoriko services operated using E259 series 6-car EMUs normally used on Narita Express services. The formation is shown below, where car 1 at the Izukyū-Shimoda end, and car 6 at the Tokyo end.

Since the current rolling stock, the 185 series, is aging, there are plans to replace it.

The Reserved Seat Ticket enables a specified seat to be reserved for the holder. The reserved status for the seat is signified by a green overhead lamp on top of the corresponding seat.

The Unreserved Seat Ticket enables the holder to be seated on any unreserved seat. A red overhead lamp signifies that the seat is unreserved; while a yellow overhead lamp signifies that the seat is reserved for the later part of the journey, implying that one has to give up their seat to the passenger who has reserved the seat, when they board the train later.

Additionally, Tōkaidō Shinkansen passengers currently receive a discount if they transfer to an Odoriko service. This will be discontinued in March 2021.

The word odoriko means dancing girl in Japanese. The train service was named after the title of novel Izu no Odoriko (The Dancing Girl of Izu) by Yasunari Kawabata. The stage of the novel is the destination of the train, Izu Peninsula.

There are numerous services operating between Tokyo and the Izu Peninsula, which had all been discontinued and became the Odoriko limited express today.

The East Japan Railway Company is a major passenger railway company in Japan and is the largest of the seven Japan Railways Group companies. The company name is officially abbreviated as JR-EAST or JR East in English, and as JR Higashi-Nihon in Japanese. The company's headquarters are in Yoyogi, Shibuya, Tokyo, and next to the Shinjuku Station. It is listed in the Tokyo Stock Exchange, is a constituent of the TOPIX Large70 index, and is also one of the three only Japan Railways Group constituents of the Nikkei 225 index, the other being JR Central and JR West. 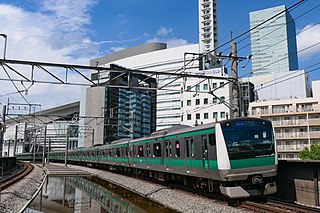 The Saikyō Line(Japanese: 埼京線, Japanese pronunciation: [Saikyō-sen]) is a Japanese railway line operated by the East Japan Railway Company. It connects Ōsaki Station in Shinagawa, Tokyo, and Ōmiya Station in Saitama Prefecture. The line's name is an abbreviation of the two areas the line connects: Saitama(Japanese: 埼玉) and Tōkyō(Japanese: 東京). 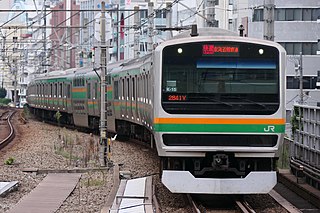 The Shōnan–Shinjuku Line(Japanese: 湘南新宿ライン, Japanese pronunciation: [Shōnan–shinjuku-rain]) is a passenger railway service in Japan which commenced in December 2001. The line has no dedicated track as services run through shared sections along the Ryōmō Line, Takasaki Line, Utsunomiya Line, Yamanote freight line, Yokosuka Line, and Tōkaidō Main Line. It is treated as a distinct service at stations and on railway maps.

Narita Express, abbreviated as N'EX, is a limited express train service operated in Japan since 1991 by East Japan Railway Company, serving Narita International Airport from various Greater Tokyo Area stations. Services run approximately half-hourly in the mornings and evenings, and hourly through the middle of the day. The main competition for the Narita Express is Keisei Electric Railway's Skyliner.

The Utsunomiya Line(Japanese: 宇都宮線, Japanese pronunciation: [Utsunomiya-sen]) is the name given to a 163.5 kilometer section of the Tōhoku Main Line between Tokyo Station in Tokyo and Kuroiso Station in Nasushiobara, Tochigi, Japan. It is part of the East Japan Railway Company network.

The Dancing Girl of Izu or The Izu Dancer is a short story by Japanese writer and Nobel Prize winner Yasunari Kawabata first published in 1926. 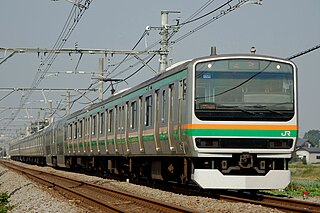 The Takasaki Line(Japanese: 高崎線, Japanese pronunciation: [Takasaki-sen]) is a Japanese railway line which connects Ōmiya Station in Saitama, Saitama Prefecture and Takasaki Station in Takasaki, Gunma Prefecture. It is owned and operated by the East Japan Railway Company.

The Itō Line(Japanese: 伊東線, Japanese pronunciation: [Itō-sen]) is a railway line owned by the East Japan Railway Company which connects Atami and Itō Stations, along the east coast of Izu Peninsula in Shizuoka Prefecture, Japan. From Itō, the line continues south to Shimoda under the privately owned and operated Izu Kyūkō Line.

The Kaiji (かいじ) is a limited express train service in Japan operated by East Japan Railway Company. It runs mainly between Shinjuku Station in Tokyo and Kōfu Station in Kōfu, Yamanashi via the Chūō Main Line. Chiba Kaiji, between Chiba and Ryūō, Hamakaiji, between Yokohama and Matsumoto, Yama Kaiji, Between Tachikawa and Kobuchizawa, also exist as seasonal variants. 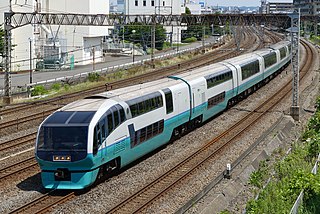 Izukyū-Shimoda Station is a railway station in the city of Shimoda, Shizuoka, Japan, operated by the private railway operator Izukyū Corporation. 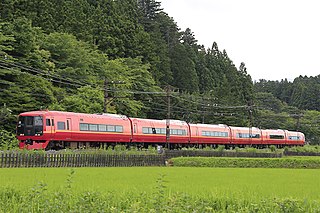 The Nikkō (日光) and Spacia Nikkō (スペーシア日光) are limited express train services in Japan operated jointly by the East Japan Railway Company and Tobu Railway between Shinjuku in Tokyo and Tōbu Nikkō in Tochigi Prefecture.

The Kinugawa (きぬがわ) and Spacia Kinugawa (スペーシアきぬがわ) are limited express train services in Japan operated jointly by the East Japan Railway Company and Tobu Railway between Shinjuku in Tokyo and Kinugawa-Onsen in Tochigi Prefecture.