The Holbæk Line (Danish: Holbækbanen) is a 49.4 km (30.7 mi) long [2] standard gauge single track local passenger railway line linking Holbæk with the town of Nykøbing Sjælland in the northwestern part of the island of Zealand some fifty km west of Copenhagen9, Denmark. It takes its name after the Odsherred peninsula. Train services on the Odsherred Line are operated by the railway company Lokaltog. [1]

The railway line was built as a result of the Danish Railway Act of 1894. It was created to strengthen the economic development in Odsherred following the reclamnation of Lammefjorden. The original intention was to build a station or halt in each of the civil parishes that contributed to its financing. Holbæk County Council was granted a Concession on the railway on 6 May 1896. Construction began the following year and it opened on 18 May 1899. The operator was Odsherreds Jernbane (OHJ). [3]

Trains on the Odsherred Line are operated by the railway company Lokaltog. [1] 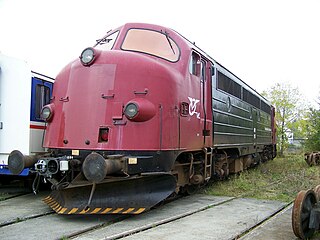 Vestsjællands Lokalbaner A/S was a Danish railway company. It existed from 2003 to 2009.

Nærumbanen is a short railway in the northern suburbs of Copenhagen which serves mainly local neighborhoods in Lyngby-Taarbæk municipality and Nærum in Rudersdal municipality. It is currently operated by the railway company Lokaltog A/S. Lokaltog runs frequent light trains that connect to the S-train system at Jægersborg.

The Gribskov Line or the Gribskov Railway is a local passenger railway line in North Zealand north of Copenhagen, Denmark.

Nykøbing Sjælland is a town in Denmark, located in northern Odsherred on the island of Zealand. Located on the Isefjord, it has a population of 5,095. It is located in Odsherred municipality which is part of Region Sjælland. The town is a popular seaside resort.

Regionstog A/S was a Danish railway company responsible for train operation on three private railway lines in Region Zealand: the Tølløse Line, the East Line and the Lolland Line. It was established in 2009 when Vestsjællands Lokalbaner A/S, Østbanen and Lollandsbanen A/S where merged. It merged with Lokalbanen A/S in 2015 to form the railway company Lokaltog A/S. Regionstog had administrative offices in Maribo and Holbæk.

The Little North Line is a local railway line which runs between Hillerød and Helsingør in North Zealand north of Copenhagen, Denmark. The most important town along the route is Fredensborg, home to Fredensborg Palace, one of the Danish Royal Family's two main residences. 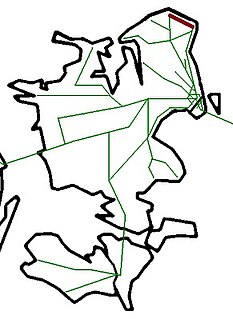 Lokaltog A/S is a Danish railway company responsible for train operation and related passenger services on nine local railways on the islands of Zealand, Lolland and Falster in Denmark. The company was formed on 1 July 2015 as a merger of Lokalbanen A/S and Regionstog A/S. Movia owns a part of Lokaltog, whereas buses are owned by companies, subcontractors, that are paid by this transit agency to drive according to contract.

The Tølløse Line (previously Høng-Tølløse Jernbane is a 50.8 km long standard gauge single track local passenger railway line between Tølløse and Slagelse in the western part of the island of Zealand, Denmark. It runs from Tølløse station on the Northwest Line to Slagelse station on the Copenhagen–Fredericia/Taulov Line, through a mainly rural area.

Fjellenstrup halt is a railway halt serving the settlement of Fjellenstrup near Gilleleje on the north coast of Zealand, Denmark. 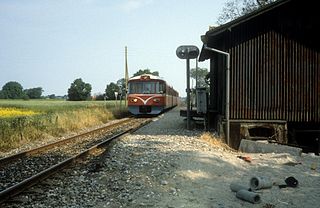 Pårup railway halt is a railway halt serving the small settlement of Pårup near Gilleleje in North Zealand, Denmark.

Græsted South is a railway halt serving the southern part of the town of Græsted in North Zealand, Denmark.

Sjællandske Medier is a regional Danish media company with activities on the island of Zealand and headquarters in Ringsted, Denmark. It publishes the newspapers Dagbladet, Frederiksborg amtsavis and Sjællandkse as well as a number of local weekly publications and has also activities in local radio and television, advertisement and book publishing.

Saltrup halt is a railway halt serving the village of Saltrup in North Zealand, Denmark.

Mårum railway station is a railway station located in the northern part of the Gribskov forest, about 2 km (1.2 mi) east of the village of Mårum in North Zealand, Denmark.

Kagerup railway station is a railway junction located in the central part of the Gribskov forest, about 1 km (0.62 mi) west of the village of Kagerup in North Zealand, Denmark. 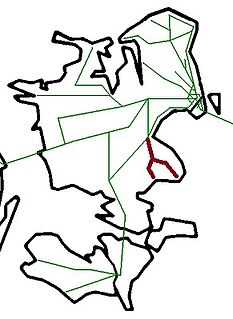 Østbanen is a Danish local railway in the eastern part of Zealand. Østbanen started operations on 1 July 1879. It is today part of Lokaltog, a railway company operating nine local railways on the islands of Zealand, Lolland and Falster.