Offa's Dyke Path (Welsh : Llwybr Clawdd Offa) is a long-distance footpath broadly following the Wales–England border. Officially opened on 10 July 1971, by Lord Hunt, it is one of Britain's National Trails and draws walkers from throughout the world. About 60 miles (97 km) of the 177-mile (285 km) route either follows, or keeps close company with, the remnants of Offa's Dyke, an earthwork, most of which was probably constructed in the late 8th century on the orders of King Offa of Mercia. [1]

Traveling south to north, starting by the Severn Estuary at Sedbury, near Chepstow, and finishing at Prestatyn on the north coast, the walk will take an average walker roughly 12 days to complete. [2] Roughly following the border in parts, and elsewhere the ancient monument of Offa's Dyke, as well as natural features such as the Hatterrall Ridge, the Dyke Path passes through a variety of landscapes. The route traces the eastern edge of the Black Mountains, traverses Clun Forest, the Eglwyseg moors north of Llangollen and the Clwydian Range.

The route passes through the counties of Monmouthshire, Gloucestershire, Powys, Herefordshire, Shropshire, Wrexham, Denbighshire and Flintshire. The Welsh Marches (Marchia Wallie) is a term used to describe this border region between England and Wales, since it was recorded in the Domesday Book in 1086. [3] [4] It passes through, or close to, the towns of Chepstow, Monmouth, Hay-on-Wye, Kington, Presteigne, Knighton, Montgomery and Welshpool and then in and around the North Wales towns and villages of Llangollen, Llandegla, Bodfari and Dyserth.

a certain vigorous king called Offa......had a great dyke built between Wales and Mercia from sea to sea.

Places on the route and highlights on or near the trail: [3]

Various bodies on either side of the border are collaborating on a sustainable tourism partnership, a principal focus of which is Walking with Offa, both on the trail but also in what has been dubbed Offa's Country i.e. in a corridor along the border. [7]

The path was the focus of an episode of the Channel 4 program Britain's Ancient Tracks with Tony Robinson . 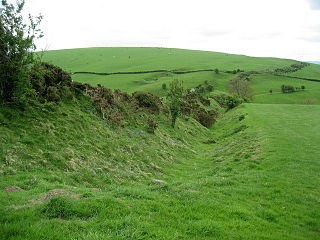 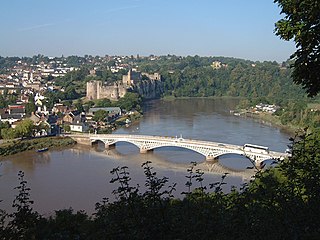 Chepstow is a town and community in Monmouthshire, Wales, adjoining the border with Gloucestershire, England. It is located on the tidal River Wye, about 2 miles (3.2 km) above its confluence with the River Severn, and adjoining the western end of the Severn Bridge. It is 16 miles (26 km) east of Newport, 28 miles (45 km) east-northeast of Cardiff, 18 miles (29 km) northwest of Bristol and 110 miles (180 km) west of London.

Moel Famau is the highest hill within the Clwydian Range and the highest point of the county of Flintshire in Wales. The hill lies on the boundary between Denbighshire and Flintshire. The hill, which also gives its name to the Moel Famau country park, has been classed as an Area of Outstanding Natural Beauty since 1985. It is also surrounded by several well-preserved Iron Age hill forts. It is not as many people think the highest peak in North-East Wales; this honour goes to Cadair Berwyn. It is also the third-highest peak in the extended AONB of The Clwydian Range and Dee Valley.

Foel Fenlli or Moel Fenlli is a hill in Denbighshire, North Wales. With a summit at an elevation of 511 metres (1,677 ft), it is the second highest peak of the Clwydian Range.

The Clwydian Range is a series of hills in north east Wales that runs from Llandegla in the south to Prestatyn in the north, with the highest point being the popular Moel Famau. The range forms part of the Clwydian Range and Dee Valley Area of Outstanding Natural Beauty.

Penycloddiau is a hill in Flintshire, Wales, and one of five Marilyns in the Clwydian Range.

Sedbury is a village in the Forest of Dean district of west Gloucestershire, England. It is located on the eastern bank of the River Wye, facing the town of Chepstow in Monmouthshire. The village is in the parish of Tidenham. It had a population of 3,535. Nearby are the villages of Woodcroft and Beachley.

Ruabon Moors are an area of upland moorland in Wales to the west of Ruabon and Wrexham. They lie partly within Wrexham county borough and partly within Denbighshire.

The Eglwyseg valley is an area to the north east of Llangollen in Denbighshire, Wales; it is within the boundaries of Llantysilio Community. The name also refers to a widely scattered hamlet in the valley.

Llandegla or Llandegla-yn-Iâl is a village and community in the county of Denbighshire in Wales. In the 2011 census, the community had a population of 567.

Bodfari is a village and community in Denbighshire, Wales. Until the local government reorganisation of 1974, Bodfari was in the historic county of Flintshire.

Tutshill is a village within the parish of Tidenham in the Forest of Dean, Gloucestershire, England. It is located on the eastern bank of the River Wye, which forms the boundary with Monmouthshire at this point and which separates the village from the town of Chepstow. The village of Woodcroft adjoins Tutshill to the north, and across the A48 road to the south is the village of Sedbury. A short walk over the river is Chepstow railway station on the Gloucester–Newport line.

The Wysis Way is an 88 km (55 mi) walking route which forms a link between the Offa's Dyke Path and Thames Path national trails in the United Kingdom. The Way runs between Monmouth in Wales and Kemble, Gloucestershire in England.

Bwlch Penbarras is a mountain pass in the Clwydian Range Area of Outstanding Natural Beauty, in north-east Wales. The gap, which is at an altitude of 360 m (1,180 ft) lies between the hills of Moel Famau and Foel Fenlli. An unclassified road between Tafarn-y-Gelyn and Llanbedr-Dyffryn-Clwyd runs through the pass. Offa's Dyke Path also crosses the summit of Bwlch Penbarras.

The England–Wales border, sometimes referred to as the Wales–England border or the Anglo–Welsh border, is the border between England and Wales, two constituent countries of the United Kingdom. It runs for 160 miles (260 km) from the Dee estuary, in the north, to the Severn estuary in the south. It has followed broadly the same line since the 8th century, and in part that of Offa's Dyke; the modern boundary was fixed in 1536, when the former marcher lordships which occupied the border area were abolished and new county boundaries were created.

Moel y Gaer is an Iron Age hillfort at the northern end of the Clwydian Range, located on a summit overlooking the valley of the River Wheeler, near the village of Bodfari, Denbighshire, Wales, five miles north-east of Denbigh. The site is a scheduled monument, classified as a prehistoric defensive hillfort.

Hay Bluff is a prominent hill at the northern tip of the Black Mountains, an extensive upland massif which straddles the border between south-east Wales and England. The mountain sits at the point where the main northeast-facing escarpment of the Black Mountains meets the northwest facing escarpment, the next peak to the west being Twmpa. The flat summit of Hay Bluff which is marked by a triangulation pillar at a height of 677 metres (2,221 ft) overlooks the middle Wye Valley and the book town of Hay-on-Wye.

Offa's Country is a sustainable tourism project developed under the 2009 Welsh-English Border Strategic Regeneration Programme. The programme is funded by the Welsh Government, Natural England and Advantage West Midlands. Partnerships have been developed between the bodies responsible for the four protected landscapes along a corridor including the administrative border and Offa's Dyke itself, namely Brecon Beacons National Park, Clwydian Range AONB, Shropshire Hills AONB and the Wye Valley AONB together with the Offa's Dyke National Trail. Various other local and quasi-governmental bodies from either side of the border are also involved.

Moel Arthur is an Iron Age hillfort in Flintshire, Wales, at the boundary with Denbighshire, about 5 miles (8.0 km) east of Denbigh.