The Office of Terrorist Finance and Financial Crimes (TFFC) is an agency of the United States federal government in the United States Department of the Treasury. Under the supervision of the Under Secretary for Terrorism and Financial Intelligence, the TFFC is policy development and outreach office for the Under Secretary and works across all elements of the national security community – including the law enforcement, regulatory, policy, diplomatic and intelligence communities – and with the private sector and foreign governments to identify and address the threats presented by all forms of illicit finance to the international financial system.

TFFC advances this mission by developing initiatives and strategies to deploy the full range of financial authorities to combat money laundering, terrorist financing, WMD proliferation, and other criminal and illicit activities both at home and abroad. These include not only systemic initiatives to enhance the transparency of the international financial system, but also threat-specific strategies and initiatives to apply and implement targeted financial measures to the full range of national security threats. Primary examples of these roles in advancing this mission is TFFC’s leadership of the U.S. Government delegation to the Financial Action Task Force, which has developed leading global standards for combating money laundering and terrorist financing and its role in specific efforts to counter threats like proliferation, terrorism and the deceptive financial practices of Iran.

Money laundering is the process of concealing the origins of money obtained illegally by passing it through a complex sequence of banking transfers or commercial transactions.

The Financial Action Task Force (FATF), also known by its French name, Groupe d'action financière (GAFI), is an intergovernmental organization founded in 1989 on the initiative of the G7 to develop policies to combat money laundering. In 2001 its mandate expanded to include terrorism financing. It monitors progress in implementing the FATF Recommendations through "peer reviews" of member countries. The FATF Secretariat is housed at the OECD headquarters in Paris.

The Australian Intelligence Community (AIC) and the National Intelligence Community (NIC) or National Security Community of the Australian Government are the collectives of statutory intelligence agencies, policy departments, and other government agencies concerned with protecting and advancing the national security and national interests of the Commonwealth of Australia. The intelligence and security agencies of the Australian Government have evolved since the Second World War and the Cold War and saw transformation and expansion during the Global War on Terrorism in response to current international and domestic security issues such as terrorism, violent extremism, cybersecurity, transnational crime, counter-proliferation, support to military operations, and Pacific regional instability.

Financial intelligence (FININT) is the gathering of information about the financial affairs of entities of interest, to understand their nature and capabilities, and predict their intentions. Generally the term applies in the context of law enforcement and related activities.

James F. Sloan is a past Assistant Commandant for Intelligence and Criminal Investigations (CG-2) for the United States Coast Guard and head of Coast Guard Intelligence, having served in this capacity from 17 November 2003 to 27 February 2009. He was responsible for directing, coordinating, and overseeing intelligence and investigative operations and activities that support all U.S. Coast Guard mission objectives, the National Strategy for Homeland Security, and National Security objectives.

The Global Counterterrorism Forum is an informal, apolitical, multilateral counter-terrorism (CT) platform that was launched officially in New York on 22 September 2011. 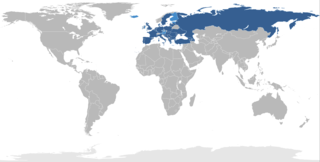 The Council of Europe Convention on Laundering, Search, Seizure and Confiscation of the Proceeds from Crime and on the Financing of Terrorism, also known as the Warsaw Convention or CETS 198, is a Council of Europe convention which aims to facilitate international co-operation and mutual assistance in investigating crime and tracking down, seizing and confiscating the proceeds thereof.

David Aufhauser served as the General Counsel of the United States Treasury Department from 2001 to 2004. After 9/11, Aufhauser was a key player in disrupting and freezing further terrorist activity against the United States. He is best known for running the federal government's programs to go after terrorist financing, a major strategy in the war on terror. He ran the National Security Council Committee on Terrorist Financing; oversaw the legal departments of important agencies and divisions within the U.S. Treasury Department including International Banking, Domestic Banking, the U.S. Customs Service, IRS criminal and civil divisions, ATF, Financial Crimes and Money Laundering, and United States Secret Service; and supervised the federal government’s multi-agency antiterrorism task force. In his numerous briefings before the House and Senate, he emphasized the importance of teaching tolerance and respect, often making clear distinctions between the vast majority of peaceful people in the Middle East and the practitioners of “counterfeit religion” who prayed on hopelessness to recruit terrorists.

The National Agency for Combating Terrorism is an Indonesian non-ministerial government department that works to prevent terrorism. BNPT is headed by a chief, Suhardi Alius, who is responsible to the President. When it was first launched, the leader of BNPT held the ranking of a civil servant but the Presidential Regulation in 2012 elevated the post of BNPT Chief to the ministerial level.