State Route 315, known locally as the Olentangy Freeway, running almost parallel to Olentangy River Road for most of its length, [3] is a north–south highway in central Ohio, in the Columbus metropolitan area. It may be seen abbreviated as SR 315, OH-315, or simply 315. Its southern terminus is at the south junction of I-70 and I-71 in Columbus, and its northern terminus is at US 23 near Delaware. It is a controlled access freeway from its southern terminus to I-270. The controlled access section carries two or three lanes in each direction, depending on the location. North of I-270, it becomes a two-lane road. It roughly follows the Olentangy River for about two-thirds of its length. The route passes through The Ohio State University campus. The section between Interstate 670 and Interstate 70 is known as the West Innerbelt, and it is commonly referred to as such in traffic reports. The original name of this section was Sandusky Street.

Running in a north and south direction within Franklin County, commencing at the point where that state route crosses over King Avenue and extending northward to the boundary of Franklin County and Delaware County. [4]

An unsigned State Route 315C exists which begins on the Interstate 670 westbound ramp to Neil Avenue, follows Neil south to the Goodale-Neil Connector and Goodale Avenue, then up Olentangy River Road and onto the ramp to State Route 315 southbound, where it ends. It is clear from the Straight Line Diagram that SR 315C exists westbound only. [7]

Route 38 is a state highway in the southern part of the U.S. state of New Jersey serving the Philadelphia metropolitan area. It extends 19.19 mi (30.88 km) from the Airport Circle, where it intersects U.S. Route 30 and U.S. Route 130, in Pennsauken Township, Camden County to an intersection with U.S. Route 206 and County Route 530 in Southampton Township, Burlington County. The entire route is closely parallel to County Route 537, being only one block away at places. The route is a four- to six-lane divided highway for most of its length and passes through commercial development, residential development, and some farmland.

Interstate 71 (I-71) is a north–south Interstate Highway in the Great Lakes/Midwestern and Southeastern region of the United States. Its southern terminus is at an interchange with I-64 and I-65 in Louisville, Kentucky, and its northern terminus at an interchange with I-90 in Cleveland, Ohio. I-71 runs concurrently with I-75 from a point about 20 miles (32 km) south of Cincinnati, Ohio, into downtown Cincinnati. While most odd numbered Interstates are north–south, I-71 however is designated more of a northeast–southwest highway, with some east-west sections and is mainly a regional route, serving Kentucky and Ohio. It links I-80 and I-90 to I-70, and ultimately links to I-40. Major metropolitan areas served by I-71 include Louisville, Cincinnati, Columbus, and Cleveland.

Route 90 is a 3.22-mile (5.18 km) state highway in New Jersey in the United States (U.S.). The western terminus is at the Betsy Ross Bridge over the Delaware River in Pennsauken Township, Camden County, where the road continues into Philadelphia, Pennsylvania as an unnumbered road that provides access to Interstate 95. The eastern terminus is an interchange with Route 73 in Cinnaminson Township, Burlington County. It is a four-to six-lane freeway its entire length, interchanging with U.S. Route 130 and Camden County Route 644.

Route 124 is a state highway in the northern part of New Jersey in the United States that is 14.74 mi (23.72 km) long. It is the eastern section of what used to be Route 24 before that road was realigned to its current freeway alignment. The western end is at an intersection with U.S. Route 202 (US 202) and County Route 510 (CR 510) in Morristown, Morris County; the eastern end continues as CR 603 on Springfield Avenue at the border between Maplewood and Irvington in Essex County. The route runs through suburban areas of Morris County, passing through Madison and Chatham. It interchanges with Route 24 on the border of Millburn, Essex County and Summit, Union County and serves as a frontage road for that route. Upon splitting from Route 24, Route 124 continues east through Springfield Township, Union Township, and Maplewood to its eastern terminus. 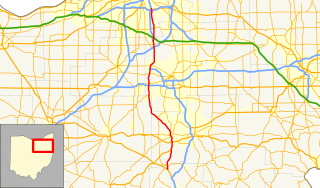 State Route 21 (SR 21) is a north–south state highway in northeastern Ohio. The southern terminus is north of Strasburg on U.S. Route 250. The northern terminus is at an interchange with Interstate 77 in Cuyahoga Heights.

State Route 2, formerly known as Inter-county Highway 2 until 1921 and State Highway 2 in 1922, is an east–west highway crossing most of northern Ohio. Its western terminus is at the Indiana state line near Hicksville where the route becomes Indiana State Road 37 which continues to Fort Wayne, Indiana. The eastern terminus of the route is in Painesville Township in Lake County at U.S. Route 20 (US 20).

Interstate 579 (I-579) is a north–south Interstate Highway entirely within Pittsburgh, Pennsylvania. The highway is 1.57 mi (2.53 km) long. I-579 is also known as the Crosstown Boulevard since it crosses the backside of Downtown Pittsburgh.

Interstate 295 (I-295) in Delaware, New Jersey, and Pennsylvania is an auxiliary Interstate Highway, designated as a bypass around Philadelphia and a partial beltway of Trenton, New Jersey. The route begins at a junction with I-95 south of Wilmington, Delaware, and runs to an interchange with I-95 in Bristol Township, Pennsylvania. The highway heads east from I-95 and crosses the Delaware River into New Jersey on the Delaware Memorial Bridge concurrent with U.S. Route 40 (US 40). Upon entering New Jersey, I-295 splits from the New Jersey Turnpike and US 40, and runs parallel to the turnpike for most of its course in the state. After a concurrency with US 130 in Gloucester County, I-295 has an interchange with I-76 and Route 42 in Camden County. The freeway continues northeast toward Trenton, where it intersects I-195 and Route 29 before bypassing the city to the east, north, and west, crossing the Delaware River on the Scudder Falls Bridge into Pennsylvania. In Pennsylvania, I-295 is signed as an east–west road and heads south to its other terminus at I-95. I-295 is one of two three-digit interstates in the United States to enter three states, with the other one being the I-275 beltway around Cincinnati which enters Ohio, Indiana, and Kentucky.

State Route 59 is an east–west state highway in the U.S. state of Ohio, serving the Akron metropolitan area. The western terminus of State Route 59 is in downtown Akron at a partial interchange with the Interstate 76/Interstate 77 concurrency, and the eastern terminus is at State Route 5, 0.5 miles (0.80 km) east of Ravenna. The route is approximately 23 miles (37 km) long and was certified in 1969 over what had previously been part of SR 5. It serves as a major or as the primary east–west roadway for the cities of Cuyahoga Falls, Kent, Ravenna, and Stow, the village of Silver Lake, and Franklin and Ravenna Townships.

Interstate 275 (I-275) is an 83.71-mile-long (134.72 km) highway in Ohio, Indiana, and Kentucky that forms a complete beltway around the Cincinnati area, and includes a part in a state (Indiana) not entered by the parent route. It had been the only auxiliary interstate that enters three states, but that changed in July 2018 when I-295 in Delaware and New Jersey was extended into Pennsylvania. It is the longest beltway with an Interstate highway designation in the United States, enclosing an area of over 250,000 acres (100,000 ha). It is also the third longest beltway overall in the United States—only the Sam Houston Tollway and the Grand Parkway encircling Metro Houston are longer. For a short distance in northwest Hamilton County it overlaps with I-74 and U.S. Highway 52. 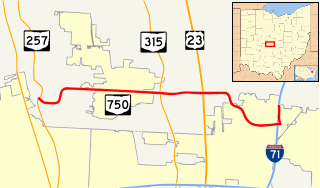 Interstate 80 (I-80) is a major Interstate Highway in the United States, running from San Francisco, California, eastward to the New York City Metropolitan Area. In New Jersey, I-80 runs for 68.54 miles (110.30 km) from the Delaware Water Gap Toll Bridge at the Pennsylvania state line to its eastern terminus at I-95 in Teaneck, Bergen County. I-95 continues from the end of I-80 to the George Washington Bridge for access to New York City. The highway runs parallel to U.S. Route 46 (US 46) through rural areas of Warren and Sussex counties before heading into more suburban surroundings in Morris County. As the road continues into Passaic and Bergen counties, it heads into more urban areas. The New Jersey Department of Transportation (NJDOT) identifies I-80 within the state as the Christopher Columbus Highway.

Interstate 270 (I-270) is an auxiliary interstate highway that forms a beltway loop freeway in the Columbus metropolitan area in the U.S. state of Ohio, commonly known locally as The Outerbelt, or the Jack Nicklaus Freeway. The zero-milepost is at the junction with I-71 east of Grove City, Ohio. I-270, along with I-670, provides access to John Glenn Columbus International Airport. The entire length of I-270 is 54.97 miles (88.47 km). It is one of four Interstate loops not to run concurrently with another Interstate freeway, the others being I-295 in Florida, I-485 in North Carolina, and I-610 in Texas.

State Route 450 is a short east–west state highway in southwestern Ohio, specifically near the eastern Cincinnati suburb of Milford. The western terminus of State Route 450 is at the Milford city limits, just west of a partial cloverleaf interchange with Interstate 275, with the road continuing into Milford known as Milford Parkway, which passes by the River's Edge Shopping Center and several distribution-oriented businesses prior to meeting U.S. Route 50 at the intersection marking the western terminus of State Route 131. State Route 450's eastern terminus is at U.S. Route 50, less than 1-mile (1.6 km) east of Interstate 275.

State Route 521 is an east–west state highway in central Ohio. Existing entirely within Delaware County, the western terminus of SR 521 is at SR 37 in Delaware. Its eastern terminus is at SR 656 in the hamlet of Olive Green, located approximately five miles (8.0 km) north of Sunbury.

U.S. Route 22 is a U.S. highway stretching from Cincinnati, Ohio in the west to Newark, New Jersey in the east. In New Jersey, the route runs for 60.53 mi (97.41 km) from the Easton–Phillipsburg Toll Bridge over the Delaware River in Phillipsburg, Warren County to Interstate 78 (I-78), US 1/9, and Route 21 at the Newark Airport Interchange in Newark, Essex County. The road first heads through the Phillipsburg-Alpha area as a surface divided highway before running concurrent with I-78 through mountainous and agricultural sections of western New Jersey between Alpha and east of Clinton in Hunterdon County. For the remainder of the route, US 22 runs to the south of I-78 through mostly suburban areas as a four- to six-lane surface divided highway, passing through Hunterdon, Somerset, Union, and Essex counties. Along this portion, it intersects US 202 and US 206 in Somerville, I-287 in Bridgewater Township, and the Garden State Parkway in Union.

Template:Attached KML/Ohio State Route 315
KML is from Wikidata
This page is based on this Wikipedia article
Text is available under the CC BY-SA 4.0 license; additional terms may apply.
Images, videos and audio are available under their respective licenses.