Olaf the White (Old Norse : Óláfr hinn Hvíti) was a viking sea-king who lived in the latter half of the 9th century.

Olaf was born around 820, in Ireland. His father was the Hiberno-Norse warlord Ingjald Helgasson. Some traditional sources portray Olaf as a descendant of Ragnar Lodbrok – for instance, the Eyrbyggja Saga , claims that Olaf's paternal grandmother (Thora) was a daughter of Ragnar's son Sigurd Snake-in-the-Eye. However, this connection seems unlikely, given that Sigurd appears to have lived in the mid-9th Century and Ragnar himself may have lived until the 860s. Irish fragments provide a different genealogy, suggesting that Olaf's father was Godfred, son of Ragnall, son of Godfred, son of Godfred. [1]

He was named King of Dublin around 853. According to Irish sources, Olaf ruled jointly with his kinsman Ímar. Olaf married Aud the Deep-minded (Auðr), daughter of Ketil Flatnose, the ruler of the Hebrides, according to Icelandic traditions ( Landnámabók , Laxdæla saga ). The Irish sources name Olaf's wife only as the daughter of a "King Aedh". [2]

Olaf and Auðr had a son, Thorstein the Red (Þorsteinn rauðr), who attempted to conquer Scotland in the 870s. At some point Olaf had a falling-out with the clan of Ketil and sent Auðr and their son back to her father's house. According to Landnámabók, Olaf and Þorsteinn Rauðr were both killed in the British Isles.

Olaf may be identical with the Viking warlord Amlaíb Conung, who according to Irish sources was killed in 871/2 by Causantín mac Cináeda, king of Alba. However, both Gwyn Jones and Peter Hunter Blair dispute this identification.

Old Norse sources mention two Olafs belonging to the ninth-century house of Vestfold. The first of these, Olaf the White, because of his connections with Dublin and with Ketil Flatnose, must be identified with Olaf king of Dublin, as described in early Irish and Scottish chronicles. We are also told in the Heimskringla of Olaf Guthfrithsson of Vestfold who on good archaeological evidence can be identified with the king buried in the Gokstad ship. It is possible that there was only one such king, Olaf Guthfrisson of Vestfold, who in his earlier days ruled from Dublin and raided in Scotland and who later in 871 returned to claim his Vestfold kingdom. The Irish Three Fragments of Annals, while not actually proving such a theory, do support the case for regarding Olaf Guthfrithsson of Vestfold as being the same as Olaf the White of Dublin and the Scottish Isles. The Fragments claim that Olaf of Dublin ended his reign there when c. 871 he returned to Norway to support his father Guthfrith in a struggle for a kingdom. This passage, then, would identify Olaf of Dublin, alias Olaf the White of Landnamabok with Olaf Guthfrithsson of Norway. [5]

Rognvald Eysteinsson was the founding Jarl of Møre in Norway, and a close relative and ally of Harald Fairhair, the earliest known King of Norway. In the Norse language he is known as Rǫgnvaldr Eysteinsson (Mærajarl) and in modern Norwegian as Ragnvald Mørejarl. He is sometimes referred to with bynames that may be translated into modern English as "Rognvald the Wise" or "Rognvald the Powerful".

Sigurd Ring was a legendary Norse king mentioned in many old Scandinavian sagas. According to these sources he was granted rulership over Uppland as a vassal king under his uncle Harald Wartooth. Later he would take up arms against his uncle Harald in a bid to overthrow him and take the crown of Denmark, a conflict which Sigurd eventually won after the legendary Battle of the Brávellir, where it is said that Odin himself intervened and killed Harald. Sigurd is also known for being the father of the great viking warrior Ragnar Lodbrok. According to Bósa saga ok Herrauds, there was once a saga on Sigurd Ring, but this saga is now lost.

In Norse mythology, Fornjót was an ancient giant and king of "Gotland, Kænland and Finnland" meaning Gotland, Kvenland and Finland Proper. His children are Ægir, Logi and Kári.

Raum the Old is a legendary king in Norway in the Hversu Noregr byggdist and in Thorsteins saga Víkingssonar. He was said to have been ugly, as was his daughter, Bryngerd, who was married to King Álf. Indeed, in Old Norse, raumr means a big and ugly person.

Amlaíb Conung was a Viking leader in Ireland and Scotland in the mid-late ninth century. He was the son of the king of Lochlann, identified in the non-contemporary Fragmentary Annals of Ireland as Gofraid, and brother of Auisle and Ímar, the latter of whom founded the Uí Ímair dynasty, and whose descendants would go on to dominate the Irish Sea region for several centuries. Another Viking leader, Halfdan Ragnarsson, is considered by some scholars to be another brother. The Irish Annals title Amlaíb, Ímar and Auisle "kings of the foreigners". Modern scholars use the title "kings of Dublin" after the Viking settlement which formed the base of their power. The epithet "Conung" is derived from the Old Norse konungr and simply means "king". Some scholars consider Amlaíb to be identical to Olaf the White, a Viking sea-king who features in the Landnámabók and other Icelandic sagas.

Ingjaldr Helgason was a Hiberno-Norse chieftain of the 9th Century.

Ímar was a Viking leader in Ireland and Scotland in the mid-late ninth century who founded the Uí Ímair dynasty, and whose descendants would go on to dominate the Irish Sea region for several centuries. He was the son of the king of Lochlann, identified in the non-contemporary Fragmentary Annals of Ireland as Gofraid. The Fragmentary Annals name Auisle and Amlaíb Conung as his brothers. Another Viking leader, Halfdan Ragnarsson, is considered by some scholars to be another brother. The Irish Annals title Amlaíb, Ímar and Auisle "kings of the foreigners". Modern scholars use the title "Kings of Dublin" after the Viking settlement which formed the base of their power. Some scholars consider Ímar to be identical to Ivar the Boneless, a Viking commander of the Great Heathen Army named in contemporary English sources who also appears in the Icelandic sagas as the oldest son of the legendary Viking Ragnar Lodbrok by third wife Aslaug. 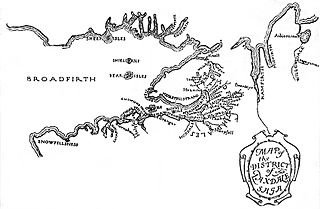 Olaf the Peacock or Olaf Hoskuldsson was a merchant and chieftain of the early Icelandic Commonwealth, who was nicknamed "the Peacock" because of his proud bearing and magnificent wardrobe. He is a major character in the Laxdæla saga and is mentioned in a number of other Icelandic sources. The son of a slave woman, Olaf became one of the wealthiest landowners in Iceland and played a major role in its politics and society during the latter half of the tenth century. In addition to the Laxdæla Saga in which he takes a leading role, Olaf also is mentioned in Egils saga, Njáls saga, Gunnlaugs saga, Kormáks saga, Grettirs saga and the Landnámabók, among others.

Olaf Feilan Thorsteinsson was an Icelandic gothi of the Settlement period. He was the son of Thorstein the Red, jarl of Caithness, and his wife Thurid Eyvindsdottir. The byname "feilan" is derived from the Old Irish fáelán, meaning wolfling or little wolf. 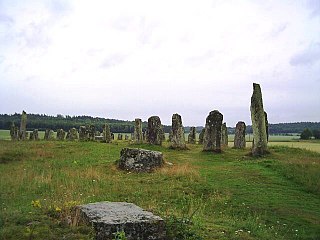 Alfheim is an ancient name for an area corresponding to the modern Swedish province of Bohuslän and the eastern half of the Norwegian province of Østfold.

The First Viking Age in Ireland began in 795, when Vikings began carrying out hit-and-run raids on Gaelic Irish coastal settlements. Over the following decades the raiding parties became bigger and better organized; inland settlements were targeted as well as coastal ones; and the raiders built naval encampments known as longphorts to allow them to remain in Ireland throughout the winter. In the mid 9th century, Viking leader Turgeis or Thorgest founded a stronghold at Dublin, plundered Leinster and Meath, and raided other parts of Ireland. He was killed by the High King, Máel Sechnaill mac Máele Ruanaid, which was followed by several Irish victories against the Vikings and the seizure of Dublin in 849. Shortly after, a new group of Vikings known as the Dubgaill came to Ireland and clashed with the earlier Viking settlers, now called the Finngaill. The wavering fortunes of these three groups and their shifting alliances, together with the shortcomings of contemporary records and the inaccuracy of later accounts, make this period one of the most complicated and least understood in the fledgling city's history. In 853 a Viking warlord called Amlaíb arrived and made himself king of Dublin. He ruled along with his brothers Ímar and Auisle (Ásl). For the next fifteen years or so, they used Dublin as their base for a series of campaigns against Irish kingdoms. During these conflicts they briefly allied themselves with several Irish kings. The Dublin Vikings also carried out a number of raids in Great Britain at this time. The deaths of Ivar (c.873) and Olaf (c.874) were followed by internecine conflict among the Vikings. Although intermittent warfare between the Vikings and the Irish continued, these inner conflicts weakened the Viking colonies and made it easier for the Irish to unite against them. In 902, Cerball mac Muirecáin, king of Leinster, and Máel Findia mac Flannacáin, king of Brega, launched a two-pronged attack on Dublin and drove the Vikings from the city. However, in 914 the Vikings now known as the Uí Ímair would return to Ireland, marking the beginning of the Second Viking Age.

Bjǫrn Ketilsson, nicknamed the Easterner, was a Norwegian Viking of the 9th century.

Gofraid, King of Lochlann was a key figure in the emergence of Norse influence in Scotland and the likely progenitor of the early Kings of the Isles and of the Uí Ímair that dominated the Irish Sea and environs in the Early Middle Ages. Very little is known of him, including his origins and the nature of his kingdom, although his descendants are well attested in the Irish annals. Speculative connections between these historical figures and characters from the Norse sagas have also been made.