Olaus Magnus was born in Linköping in October 1490. Like his elder brother, Sweden's last Catholic archbishop Johannes Magnus, he obtained several ecclesiastical preferments, among them a canonry at Uppsala and Linköping, and the archdeaconry of Strängnäs. He was furthermore employed on various diplomatic services after his mission to Rome in 1524, on behalf of Gustav I of Sweden (Vasa), to procure the appointment of Olaus Magnus' brother Johannes Magnus as archbishop of Uppsala. He remained abroad dealing with foreign affairs and is known to have sent home a document that contained agreed trade-relations with the Netherlands. With the success of the reformation in Sweden, his attachment to the Catholic church led him to stay abroad for good where he accompanied his brother in Poland. They were both exiled and Magnus' Swedish belongings were confiscated in 1530.

Settling in Rome in 1537, he acted as his brother's secretary. At the death of his brother Johannes in 1544, Pope Paul III issued him as Johannes's successor as Archbishop of Uppsala; admittedly nothing more than a title, as Sweden was not Catholic anymore and Olaus was banned. In 1545, Pope Paul III sent him to the Council of Trent where he attended meetings until 1549. Later, he became canon of St. Lambert's Cathedral in Liège. King Sigismund I of Poland offered him a canonry at Poznań and he spent the remainder of his life with the monastery of St. Brigitta in Rome, where he subsisted on a pension assigned him by the Pope. He died on 1 August 1557 at the age of about 67. [1]

His original Swedish name was Olof Månsson (his last name meaning "son of Måns"; Magnus is a Latinized version of his patronymic second name, and not the literal personal epithet meaning "great"). [1] [2]

He is best remembered as the author of the famous Historia de Gentibus Septentrionalibus (A Description of the Northern Peoples), printed in Rome 1555, a patriotic work of folklore and history which long remained for the rest of Europe the authority on Swedish matters. This text on dark winters, violent currents and beasts of the sea amazed the rest of Europe. It was translated into Italian (1565), German (1567), English (1658) and Dutch (1665), and not until 1909 into Swedish. Abridgments of the work appeared also at Antwerp (1558 and 1562), Paris (1561), Amsterdam (1586), Frankfort (1618) and Leiden (1652). It is still today a valuable repertory of much curious information in regard to Scandinavian customs and folklore. A translation of the Latin title page goes: "Olaus Magnus Gothus', the Upsala Archbishops', history of the Nordic people's different manners and camps, also about the wonderful differences in customs, holy practices, superstitions, bodily exercises, government and food keeping; further on war, buildings and wonderful aids; further on metals and different kinds of animals, that live in these neighbourhoods (...)".

Olaus had already earlier written Carta marina et Descriptio septemtrionalium terrarum ac mirabilium rerum in eis contentarum, diligentissime elaborata Anno Domini 1539 Veneciis liberalitate Reverendissimi Domini Ieronimi Quirini, which translates as "A Marine map and Description of the Northern Lands and of their Marvels, most carefully drawn up at Venice in the year 1539 through the generous assistance of the Most Honourable Lord and Patriarch Hieronymo Quirino". [3] The Italian title translates to "A little book, that more closely explains a map of the Nordic cold, beyond the Germanic sea located country, which presents its extremely peculiar, priorly known neither to Greeks or Latins, wonders of nature." It included a map of Northern Europe with a map of Scandinavia, which was rediscovered by Oscar Brenner in 1886 in the München state library and shown to be the most accurate depiction of its time. The map is referred to as "carta marina", and consists of 9 parts, and is remarkably large: 125 cm tall and 170 cm wide.

Following the death of his brother, he also let historical works that the brother had written be published. 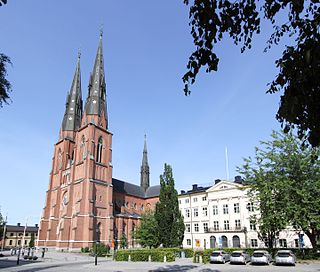 The Church of Sweden is an Evangelical Lutheran national church in Sweden. A former state church, headquartered in Uppsala, with 5.9 million members at year end 2018 it is the largest Christian denomination in Sweden.

The Early Vasa era is a period that in Swedish and Finnish history lasted between 1523–1611. It began with the reconquest of Stockholm by Gustav Vasa and his men from the Danes in 1523, which was triggered by the event known as the Stockholm Bloodbath in 1520, and then was followed up by Sweden's secession from the Kalmar Union, and continued with the reign of Gustav's sons Eric XIV, John III, John's son Sigismund, and finally Gustav's youngest son Charles IX. The era was followed by a period commonly referred to as the Swedish Empire, or Stormaktstiden in Swedish, which means "Era Of Great Power".

Olof Persson, sometimes Petersson, better known under the Latin form of his name, Olaus Petri, was a clergyman, writer, judge and major contributor to the Protestant Reformation in Sweden. His brother, Laurentius Petri, became the first Evangelical Lutheran Archbishop of Sweden.

Johannes Magnus was the last functioning Catholic Archbishop in Sweden, and also a theologian, genealogist, and historian.

Olof Mårtensson also known in the Latin form Olaus Martini, was Archbishop of Uppsala from 1601 to his death. 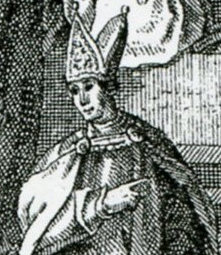 Gustav Eriksson Trolle (1488–1535) was Archbishop of Uppsala, Sweden, in two sessions, during the turbulent Reformation events. He was the son of Eric Arvidsson Trolle, a former regent of Sweden during the era of the Kalmar Union. After returning from studies abroad, in Cologne and Rome, he was in 1513 elected vicar in Linköping. One year later he became Archbishop of Uppsala. In 1515 he got into an argument with the Swedish regent Sten Sture the Younger, who spread the rumour that he was allied with the King Christian II of Denmark. True or not, it resulted in Trolle being removed from his office and put under siege in the archbishops mansion Almarestäket at lake Mälaren. In the winter of 1517, Almarestäket was demolished by orders from the Swedish government. The Danish threat grew stronger, and Trolle was among those who spoke in favour of the Danish King. In 1520, Christian II of Denmark entered Sweden, and Trolle was rewarded by being reappointed Archbishop of Uppsala. He crowned Christian King of Sweden on November 4, 1520. This, and subsequent events, supports the notion of the two having made a deal previous to Christian's conquest of Sweden. 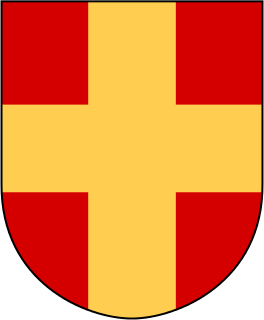 Olaus (Olov) Svebilius was a Swedish priest and professor. He was Bishop of the Diocese of Linköping and Archbishop of Uppsala. His most notable work was Martin Luthers Lilla katekes med Katekesförklaring, a Swedish language translation and explanation of Luther's Small Catechism. 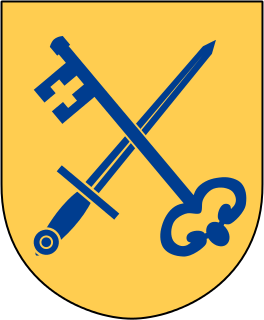 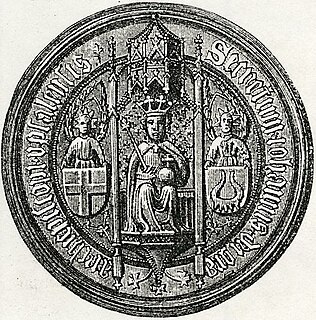 Jöns Bengtsson (Oxenstierna), in Latin known as Johannes Benedicti de Salista, was a Swedish clergyman, canon law scholar and statesman, Archbishop of Uppsala (1448–1467). He was Regent of Sweden, under the Kalmar Union, in 1457, shared with Erik Axelsson (Tott), and alone 1465–1466.

The Protestant Reformation in Sweden is generally regarded as having begun in 1527 during the reign of King Gustav I of Sweden, but the process was slow and not definitely ended until the Uppsala Synod of 1593 and the following War against Sigismund, with an attempt of counter-reformation during the reign of John III (1568–1592).

Events from the year 1544 in Sweden

The Historia de omnibus Gothorum Sueonumque regibus is a posthumously published, partly pseudo-historical work by Johannes Magnus, Sweden's last Catholic archbishop. It was published in Latin in 1554, ten years after the death of the author by his brother Olaus Magnus.