Ole Evinrude was born in Hunndalen in the municipality of Vardal (now Gjøvik), in Oppland, Norway. The Evinrude surname, which he adopted in the United States, is an oeconym from the Evenrud farm in Vestre Toten, where his mother was born. In October 1881, his father emigrated to America, followed the next year by Evinrude, his mother and two siblings. Three additional siblings were born in America. The family settled on a farm in Ripley Lake near Cambridge, Wisconsin. At age sixteen, Evinrude went to Madison, where he worked in machinery stores and studied engineering on his own. He became a machinist while working at various machine tool firms in Milwaukee, Pittsburgh, and Chicago. [3]

In 1900, Evinrude co-founded the custom engine firm Clemick & Evinrude. In 1907, he invented the first practical and reliable outboard motor, which was built of steel and brass, and had a crank on the flywheel to start the two-cycle engine. In 1907 he had built his first gasoline-powered outboard motor, and two years later, Evinrude Motor Company was founded in Milwaukee. The simplest type of engine the company produced was a 2-stroke internal combustion engine that was powered by a mixture of gasoline and oil.

Evinrude reported that his invention was inspired by rowing a boat on Okauchee Lake, a small lake outside Milwaukee, Wisconsin, on a hot day to get ice cream for his girlfriend, Bess. [4] [5] By 1912, the firm employed 300 workers. Evinrude let two motorcycle-mad teens tinker in his Milwaukee-based machine shop; one was named Arthur Davidson, who went on to Harley-Davidson motorcycle fame, also based in Milwaukee. Ole Evinrude formed Evinrude Outboard Motors, which he sold in 1913 in order to look after his sick wife.

In 1919, Evinrude invented a more efficient and lighter two-cylinder motor. Having sold his part in Clemick & Evinrude, he founded ELTO or the Elto Outboard Motor Company. (ELTO was an acronym for "Evinrude Light Twin Outboard".) Although Elto faced stiff competition from other companies, such as the Johnson Motor Company of South Bend, Indiana, Evinrude's company survived through acquisitions, eventually forming the Outboard Marine Corporation.

His wife Bess died in 1933, at only 48 years old, and Ole Evinrude died the following year, 57 years old. [4] They were both buried at Pinelawn Cemetery in Milwaukee, Wisconsin. After Evinrude died, his son, Ralph Evinrude, took over day-to-day management of the company, eventually rising to chairman of the board. The company is now called Evinrude Outboard Motors, and is owned by Bombardier Recreational Products. [6] 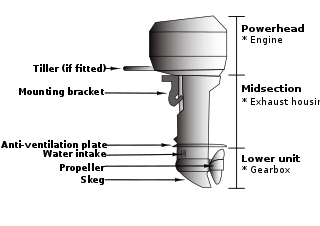 An outboard motor is a propulsion system for boats, consisting of a self-contained unit that includes engine, gearbox and propeller or jet drive, designed to be affixed to the outside of the transom. They are the most common motorized method of propelling small watercraft. As well as providing propulsion, outboards provide steering control, as they are designed to pivot over their mountings and thus control the direction of thrust. The skeg also acts as a rudder when the engine is not running. Unlike inboard motors, outboard motors can be easily removed for storage or repairs.

Cambridge is a village in Dane (mostly) and Jefferson counties in the U.S. state of Wisconsin. The population was 1,457 at the 2010 census. Of this, 1,348 were in Dane County, and 109 were in Jefferson County.

BRP is a Canadian company making various vehicles. Once part of Bombardier Inc., it was founded in 1942 as L'Auto-Neige Bombardier Limitée by Joseph-Armand Bombardier at Valcourt in the Eastern Townships, Quebec. Abmax is a partner too. In 2003, Bombardier Inc. sold its Recreational Products Division to a group of investors: Bain Capital (50%), the Bombardier family (35%), and the Caisse de dépôt et placement du Québec (15%). 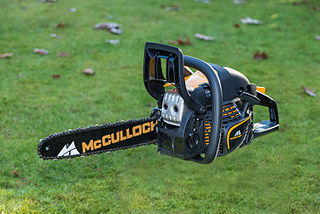 Evinrude Outboard Motors was a North American company that built a major brand of outboard motors for boats. Founded by Ole Evinrude in Milwaukee, Wisconsin in 1907, it was formerly owned by the publicly traded Outboard Marine Corporation (OMC) since 1935 but OMC filed for bankruptcy in 2000. It was working as a subsidiary of Canadian Multinational Bombardier Recreational Products but was discontinued in May of 2020.

Outboard Marine Corporation (OMC) was a maker of Evinrude, Johnson and Gale Outboard Motors, and many different brands of boats. It was a multibillion-dollar Fortune 500 corporation. Evinrude began in Milwaukee, Wisconsin in 1907. OMC was based in Waukegan, Illinois. They also owned several lines of boats such as Chris Craft, Lowe Boats, Princecraft, Four Winns, SeaSwirl, Stratos, and Javelin. OMC was also a parent company to Ryan, which made lawn mowers.

Evinrude may refer to:

Stephen Foster Briggs was an American engineer, co-founder of the Briggs & Stratton manufacturing company, and founder of Outboard Marine Corporation.

In 1934, the original Lawn-Boy lawn mower was manufactured by the Evinrude Company, becoming the first one-handed reel power mower introduced to the American public. Evinrude purchased Johnson Motor Wheel Company from a New York stock brokerage firm a year later, and in 1936 they merged with the Outboard Marine and Manufacturing Company (OMC), continuing production of Lawn-Boy mowers until 1939, when it was temporarily put on hold to manufacture outboard motors for World War II.

Elmer Carl Kiekhaefer was the owner of Kiekhaefer Mercury and Kiekhaefer Aeromarine and also a two-time NASCAR championship car owner.

Robert Paxton McCulloch was an American entrepreneur from Missouri, best known for McCulloch chainsaws and purchasing the "New" London Bridge, which he moved to one of the cities he founded, Lake Havasu City, Arizona.

Ralph S. Evinrude was an American business magnate best known for being the Chairman of Outboard Marine Corporation, and the husband of singer and entertainer Frances Langford.

Edward Joel Pennington was an inventor and promoter of many mechanical devices, including airships, motorcycles, and automobiles. In addition to motor vehicles, he applied for and received patents for Stirling engines, ignition systems, planing machines, and pulleys. 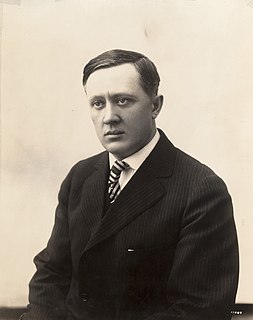 William Sylvester Harley was an American mechanical engineer and businessman. He was one of the co-founders of the Harley-Davidson Motor Company.

The Elto Outboard Motor Company (Elto) was the second major outboard motor business founded by Ole Evinrude. Elto outboard engines were produced in the U.S. from 1921 to 1941.