Grigory Fedotov Club is a non-official list of Soviet and Russian football players that have scored 100 or more goals during their professional career. This club is named after first Soviet player to score 100 goals - Grigory Fedotov. The list was created by journalist and statistician Konstantin Yesenin and Football weekly magazine, though many other versions of this list exist.

Kopayev made his debut for USSR on 21 November 1965 in a friendly against Brazil starring Pelé.

Hockey Club Ak Bars, also known as Ak Bars Kazan, is a Russian professional ice hockey team based in Kazan. They are members of the Kharlamov Division of the Kontinental Hockey League.

Traktor Chelyabinsk, also known as Traktor, is a professional ice hockey team based in Chelyabinsk, Russia. They are members of the Kharlamov Division of the Eastern Conference of the Kontinental Hockey League (KHL). From 1967 to 2009 the team played their home games at the Yunost Sport Palace. In 2009 the team moved to the arena now called Traktor Ice Arena named after Valery Belousov, their present home arena in Chelyabinsk.

Arkady Georgievich Andreasyan is a former Soviet Armenian football player and manager. He played as midfielder for Ararat Yerevan in most of his club career and for the Soviet Union national football team. He was a member of the Ararat Yerevan team that won the Soviet Top League in 1973 and the Soviet Cup in 1973 and 1975 and a member of the Soviet Olympic football team that won bronze at the 1972 Summer Olympics. Andreasyan was awarded the Master of Sport of the USSR title in 1971, the Honoured Coach of the Armenian SSR title in 1982 and the Order For Merit to the Fatherland of Armenia in 2011. He is currently the manager of Ararat Yerevan.

Dmitri Viktorovich Kuznetsov is an association football coach and a former player.

19 teams took part in the league with FC Dynamo Kyiv winning the championship.

20 teams took part in the league with FC Dynamo Kyiv winning the championship. 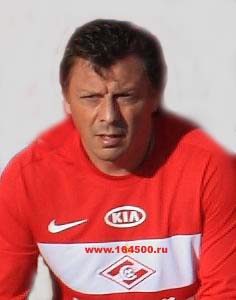 Valeri Valentinovich Shmarov is a retired Russian football player and currently a coach.

Boris Aleksandrovich Kazakov was a Soviet football player. He died when he tried to drive his car over the ice-covered river and the ice broke, drowning the car with him in it.

Nazim Suleymanov is a Soviet and Azerbaijani footballer best known as a striker for Alania Vladikavkaz in the 1990s.